At age 33, Lee Redden had put himself in the position most every Silicon Valley-based entrepreneur envisions. Sitting on his patio in Palo Alto, California, he chewed over one immense thought: "I never have to work again."

And while Redden can't answer the age-old question of whether money can buy happiness, he's fairly confident it can buy purpose.

Today, Redden is John Deere's chief scientist at Intelligent Solutions Group and Blue River. It's a perfect fit, marrying a passion for problem solving with the need to feed the world.

It led to the creation of what today is known as Deere's See & Spray™ — a system that allows farmers to target individual weeds in a field, distinguishing them from the crop itself.

The sale of a startup company — especially one formed by two Stanford University students — is not always headline-making. In some circles it's expected.

The introspection from his patio prompted additional research and a conclusion — he could either suffer the slings and arrows of outrageous fortune or he could make an impact.

That's when Redden decided to make his life and his work mission-based.

Personally, he wants to create technology that will improve 10 percent of the arable land in the United States within seven years.

And, in a nod to his early beginnings and his Nebraska roots, he's focused on bringing more computer science into undergrad engineering education at schools in the Midwest.

At Deere he has two overarching goals as well. The first is to educate the broader employee base on emerging technologies and how they relate to Deere equipment and connectivity in production systems.

The production systems represent, to Redden, the vision of Blue River from the start, having never been just a sprayer system. It was the software that would be used in multiple products. It represents the updates sent to equipment with a push of a button, like an operating system tweak for your cellphone. One download, one improvement.

"If we can set up these systems the right way, I can do code updates on a set of sprayers that can impact 3 to 4 percent of planet that year. And I can do the same thing with harvesters."

To make all this happen Redden will need to keep the engineering pool well-stocked in a highly competitive search for talent. Some days that can be a climb into thin air.

"At first we either get 'Who is John Deere?' Or, it's 'Oh, the tractor company,'" he said. "That's when I say, 'Let's talk about how food is produced.' We realize there may be other companies out there that will give higher offers, but we let them know there is not another company that will give them nowhere near as meaningful work." 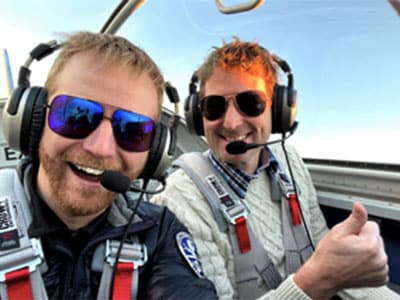 Redden has a bit of James Bond in him with a pilot's and skipper's license as well as a collection of fast cars and motorcycles.

A mind put in motion

Those missions most likely represent the midpoint of Redden's ambitious career. The first stones of his path were placed not long ago on a patch of grass in Kearney, Nebraska.

Redden can still hear the water running, filling up a 5-gallon bucket. Overhead he can see the model airplane his father, Rick, is maneuvering against a faded blue June sky. Next to him is a giant metal drum, the width of a car. The drum is used to smooth out an airfield for takeoffs and landings.

There is also a stopwatch and a challenge. It's fair to say there's a lot going on.

His father's friend has asked him to figure out how long it would take to fill up the massive drum using the bucket and the stopwatch as his only data points.

In a life built of data points this shouldn't be much of a challenge for Redden.

But, keep in mind, at this point of the story he’s just 9 years old and the task at hand seems more daunting for a third grader than it does a Fellow Award winner.

"He said, 'OK, do the math on this one' and he grabbed the bucket, put the hose in it, turned it on full and said, 'How long of a walk can we go on and come back in time to shut off the hose before the drum overfills?' I used the stopwatch to time how long it took to fill the bucket and then used that to calculate filling the drum," Redden remembers.

"As we walked, we would go through the math — the circle, what the bucket means, and how you would empirically measure those things."

Such a perfect word — learning through observation, experiment, or experience. Redden's life could not be defined by a better proxy.

Time has been a foundational measurement for Redden, both in the absolute and the abstract. Whether he's seeking the answer to filling a large drum (35 minutes by the way, give or take) or realizing the independence gained by having disposable income.

As a teen he landed a job that lined his impatient pockets. "I could go buy all kinds of things and that opened a whole bunch of doors," he said. "That independence was an amazing key unlock for me."

A Midwest hailstorm he labeled a "lucky break" meant roofers were needed and companies were willing to pay $50 an hour. Young and lacking real-world responsibility, Redden and his high school friends put the money to good use.

"We bought a bunch of four-wheelers and dirt bikes and trucks," he said.

When the vehicles started to break Redden was there to fix them, creating an informal opportunity to learn. His frequent visits to a repair shop landed him a job for his final two years of high school.

The experience showed him what engineering could be.

"You are given a problem, which is a piece of equipment that is broken," he said. "You are given tools to debug it and you're timed for how fast you can fix that problem. The deeper you understand how it works, the faster you diagnose and the faster you fix, the more problems you get solved and the more reliable you solve future problems. More knowledge was directly translated into better work." 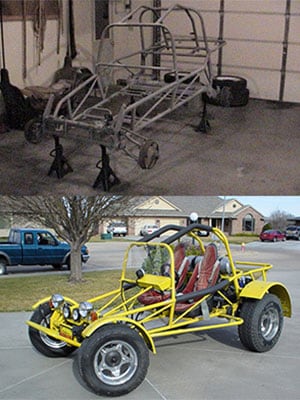 The before and after of his high school project to build his own sandrail car. He would build the vehicle from the ground up.

The attraction was not unexpected. His parents had built a sturdy foundation of responsibility wrapped in freedom. His dad, a sign salesman with "an engineering bend," had a well-appointed garage that Redden called "an incredible gift." With his father's help and encouragement Redden would build two go-karts and a sand rail car. He would learn to weld through trial and error and let his imagination lead the way.

Redden's mom, Joy, "lived in a world of no wrong" and approached work — she owned an accounting small business — and people with high energy and openness. "She showed me a lot," he said, "and we are very similar people."

His parents' personalities shaped the social circles that matched his intellectual appetite. And with each — from sports to math to mechanics — the circles offered stimulation.

Redden often shifts subjects, rarely tugging on the leash that controls his brain. It is a diverse collection of thoughtful introspection and weighty exploration. Watching his mind work shows it's as far from one-track as one-track can be.

It would eventually be math that pushed him forward with the next "thing" sitting two hours east at the University of Nebraska. College life suited him perfectly.

"I got involved in a bunch of cool projects there," he said. "I built miniature surgical robots and designed a solar panel array for a train track measurement system. It was really a fantastic set of experiences."

He paired the fellowship with Stanford University, providing the anti-structure he craved.

"It meant that I wasn't tied to a professor or department," he said. "I could work on anything that I wanted to."

He began his master's pursuit with confidence, realizing his run as an undergrad separated him from his classmates. Or so he thought.

"I show up and all of my roommates are entrepreneurs," he said. "They started having these discussions about building systems that affect things in the world, and I am blown away by this. I am just really — yeah, I'm really blown away."

Stanford's environment expanded his mind, changed his outlook, and offered an unexpected detour.

"I went there with the mindset of being a heads-down Ph.D. student and then …" his voice fades a little but returns. "And then I met Jorge."

"We started with autonomous lawn mowers, pivoted over to autonomous weeding in carrots, started a company after that class, pivoted a couple more times to get to thinning of lettuce," Redden explained.

Then, the life-changer: "I dropped out of the Ph.D. program about six months later."

They started having these discussions about building systems that affect things in the world, and I am blown away by this. I am just really — yeah, I'm really blown away.

Back to the future

When Redden first arrived at Stanford he was able to take his base knowledge of engineering and have it stretched by modern applications. "It was a way to go several layers deeper," he said. "That was really fantastic, and it really strengthened my ability to apply the most modern techniques."

Blue River became his obsession and in one simple motion that obsession would remind him of his unique abilities.

In early summer of 2012, Redden and Heraud were set to demonstrate the new spraying system.

Hooked to a truck was a trailer and the sprayer. As Redden began to back up he looked behind him. This would be the event, as he sat in the cab and looked back on his invention, where the journey of his life's work would be in focus.

But that'd be wrong. It wasn't what was on the trailer that caused Redden a moment of reflection. It was moving the trailer.

"I was thinking it's really weird that there is a single person that has all of these skills," he said. "My mechanic skills came in when I was backing up trailers and stuff like that and loading pieces of equipment. And then my computer science skills came in here, and then my building skills came in when we're fabricating this thing up. And I did electrical board design for the surgical robots before."

Not long after, Redden and Heraud would sell Blue River to Deere and begin working for the company. "I was really happy it was Deere," Redden said. "Our missions for agriculture aligned."

And, now, Fellow Award — another accomplishment to be measured and weighted. While Redden admits he hasn't sat down and thought it through, the honor certainly brings value.

"I think it is a useful tool to use in several conversations with folks, to make sure that their ear is there," Redden said. "Because if you're not going to listen to me about this thing in recruiting or artificial intelligence or machine learning, then who are you going to listen to?"

It's also to be expected that the award would bring added pressure. But, that's a matter of perspective.

"I've taken on enough pressure with these big missions that it hasn't actually changed the pressure I feel. Improve 10 percent of the arable land in the United States within seven years," he said simply. "It's just going to take time to figure it out."

And, if we've learned anything about Redden, figuring out a problem is something he's perfectly suited for, even if this one's not set to a second hand.