Gray's future took root at home, on the farm 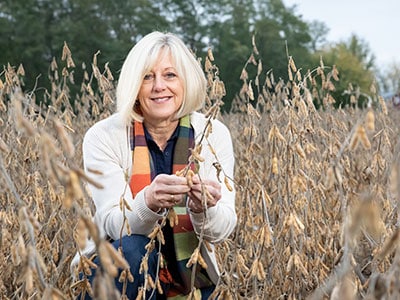 Sue Gray, John Deere's senior corporate staff agronomist, has been at home in farm fields since she was a child, appreciating the science behind raising a crop.

Sue Gray was certain. As certain as a high school senior can be.

As a student, Gray loved music. She learned to play the flute and then the oboe, with visions of performing in the University of Illinois' marching band. Her first step on that path, getting accepted — "on paper" — into the school's music program, had been complete. The next would be an audition, cementing her place and unfurling her future.

While growing up in a small, rural community can be a blessing, it can come with unplanned limitations.

See, Gray's Catholic high school in Highland, Illinois, didn't have a football team, which meant it didn't have a marching band, and the music curriculum offered insufficient preparation.

"As the audition approached, it became evident pretty quickly that I wasn't prepared for this," she said.

But, as one dream faded another formed just as quickly. Gray will call this career-defining moment an epiphany. By definition, she's correct. By reflection, the decision was with her all along.

Truth be told, music was just a small part of who she was.

Back home there was a farm — crops, dairy cows, purebred hogs, and a potential future she hadn't considered. Her grandfather owned the land and her father, Othmar Geiger, rented the cropland and helped his father-in-law with the livestock. Gray and her siblings provided labor. Her mother, Delores, managed the farm books and livestock records while tending to the daily needs that having six children in 11 years can generate.

"All of a sudden it's like, 'I've taken this for granted,'" Gray said. "It had never occurred to me, because we weren't a big farm, and certainly not big enough for me to return to, but I realized agriculture could be a really fun and extremely meaningful vocation."

Gray's high school also didn't have FFA or an agriculture program, so she never viewed what sat just beyond her front door as a career.

"My exposure then was fairly isolated," Gray, John Deere's senior corporate staff agronomist, said. "It wasn't until I went to the university that I realized there were ag career possibilities that existed outside of the farm. I just didn't know what I had." 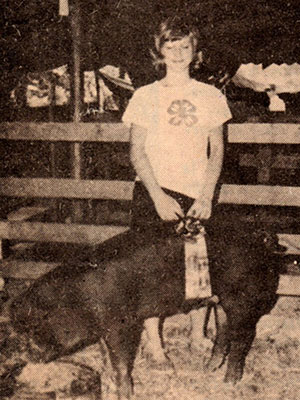 This photo from a newspaper clipping shows Sue Gray showing a prized hog at a 4-H contest. Gray said 4-H was an integral part of her family's life growing up.

What Gray did have is two parents who instilled the strong value of loyalty. In both instances that loyalty took shape, to some degree, by way of sacrifice.

"Dad worked really hard to keep us fed and to get us the best education he could," she said.

Gray is standing now, hands resting on the back of her chair. She describes her father as a man raised from modest means, a man who wasn't particularly "warm and fuzzy."

She squeezes the back of the chair, wanting to get this description of her father right.

"He was loyal to his family and his kids in sacrificing his own potential career to make sure that the legacy of the farm remained with us," she adds. "He was very consistent and supportive. And he expected a lot."

It's those last two sentences that came to life growing up, mainly through 4-H and most specifically through public speaking. Reliving this brings a smile. Her father admired the spoken word, taking its mastery as a sign of accomplishment and intelligence. He would drill his children — mainly her and her oldest brother, Jerry — until perfection, focusing on every word and how it was delivered.

The scene is still fresh. Following a dinner most likely made in her mom's electric skillet, her dad would go to the living room and sit in his green upholstered chair. His eldest daughter would stand before him, eyes forward, and ready. The wood paneling would make the room darker than it was as large farm windows captured the day's final light.

"He was critical, always providing notes, and feedback," Gray said. "His coaching was beneficial and inspired such a drive for excellence that it felt painful to ever fall short."

Iron would sharpen iron. Gray credits her father for her success in her first role at John Deere, training non-agronomists to become Deere's first Tillage Masters, and in her highly recognizable position in the creation and delivery of the company's arena presentations at national farm shows.

"I can't imagine anything that would have been cooler than for him to see me deliver at the farm shows, given the meticulous word selection and memorization right up to the appropriate inflexion," she said with the kind of smile only made by memories. 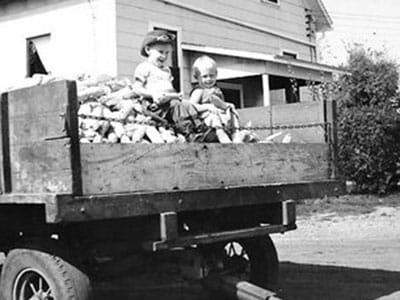 Life on the farm in rural Illinois meant you spent a lot of time with siblings. Sue Gray was one of six children, often playing with her brother Jake.

The demands of a big family

When Gray talks of her father her voice is full of appreciation. With her mother there is admiration. Gray described her — with a quick response and a loving laugh — as "the car driver."

"We were just a busy family," Gray said. "Between doing laundry, putting meals on the table in an era that preceded 'convenience foods,' and getting people to appointments or whatever, she was busy."

Although she had no advanced education her intelligence caught her daughter's attention. "I always admired her as being very smart," Gray added. "She was a bookkeeper prior to marriage and then a mom forever."

She would return to work after raising the children, retiring at age 81.

"I still hope that I am as bright at her age as she seems to me to be," Gray said.

Rural life was an outdoor adventure for the Geiger children with 4-H (a youth organization) as the primary outlet. Projects kept them all busy, mainly showing hogs at fairs.

"It really consumed our spare time," she said. "It was justified to make a trip into town to 4-H meetings because the whole family would get in the car and attend together." 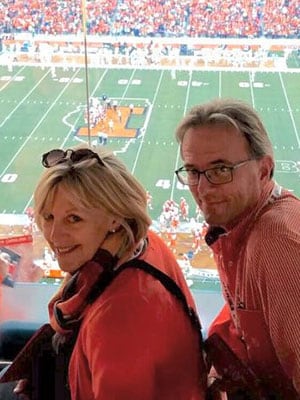 Sue Gray's affinity for her alma mater has spanned her lifetime. "I often recognize that every step I took in my career, I could trace back to the University of Illinois," she said.

Life on, beyond the farm

With six children, most houses would feel small, but if it's all you know then it's all there is. The Geiger home had just three bedrooms. In one small bedroom were their three daughters, the other their three sons. Gray doesn't recall spending much time in the house for obvious reasons. "There was just no place inside to get away. Plus, I just wanted to be outside, all the time."

She spent most of her time with her brother Jake, who was closest to her age. They would play cops and robbers, cobbling wood blocks into guns. When variety was needed and car rides weren't available, Gray would get on her bike and ride for miles on the country roads, a retreat into nature she enjoys to this day.

She described their rural yard as a small forest, allowing her love of the outdoors not to be restricted to the ground.

"I really enjoyed climbing trees," she said. "As a kid there was some adventure and danger to it, but it was also quiet up there, and peaceful."

And then there was the farm.

"The chores on the farm were handed out based on age," Gray explained. "It had nothing to do with gender. Eventually, when I was the oldest at home, I became more actively involved. That's when I realized how much I really did love it."

Gray would eventually resubmit her university application, this time to the College of Agriculture and chose farm management as an area of study. While in the program agronomy caught her attention, but maybe not for the reasons one might think.

"It was a way to be in agriculture and not have smelly hair," she laughed. "Agronomy was the gentleman's way to farm."

At Illinois it all came into focus — the daily chores, the 4-H practices in the living room, showing hogs at the fair, and the loyalty to farm and family.

"It's where I learned to see the world and understand the big picture," she said. "I often recognize that every step I took in my career, I could trace back to the University of Illinois. Every good thing that happened was because of the connection or something that I had started at the university." 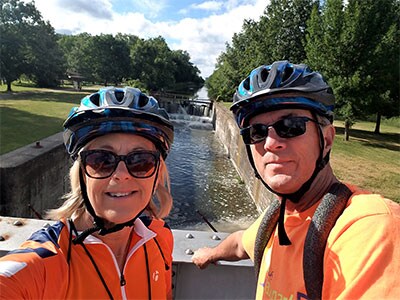 Ever since childhood Sue Gray has enjoyed the connection between biking and nature. Her husband, Eric, often joins her on routes along the Hennepin Canal near Geneseo, Illinois.

A career takes off

Her interest in agronomy hit full stride when she met a life-changing professor, Dr. Rich Johnson. Gray does not stray far from mentioning his teaching, mentorship, kindness, and inclusion.

"He was very special to me," Gray said. "At Illinois I worked on an integrated pest management project under Rich. That really started it all."

In the same year Gray graduated, Johnson was hired by John Deere. "A big win for Deere. A bad loss for the university," she said.

After graduation, Gray would work for 10 years while also obtaining her master's degree in Crop Science. Eventually, after her employer closed, she reached out to Johnson. Without a full-time job to offer, he asked her if she would want to be a consultant.

"I walked away that day even happier than the day I learned I got the Fellow Award," Gray said. "I was going to work for Rich Johnson."

"I thought he was the best agronomist in the world because his Deere experience provided him a global perspective," she said. "I thought working for Rich was an incredible privilege and learning opportunity for an agronomist." Accomplishments and expertise aside, Johnson's biggest gift was treating Gray as a peer and a colleague. 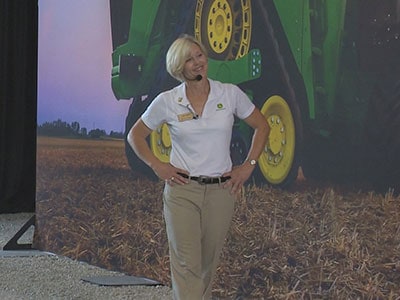 Years of practicing with her father honed Sue Gray's public speaking skills. Those efforts brought key roles for Deere, like this one at the 2015 Farm Progress Show.

Gray's drive for excellence and early lessons in loyalty also bore fruit: After 25 years serving as a consultant under Johnson's leadership, as well as Dr. John Hickman and Dr. Tom Doerge who followed him, Gray was the natural choice to carry the mission forward when the position became available in 2017.

An agronomist's work at John Deere includes the study of tillage, crop nutrition, pest and weed control, and row spacing concepts. With the addition of the agriculture validation and verification process (AV&V), agronomy also is a resource within Production Systems teams, she said. Before a new Deere innovation is started Gray and her colleagues are brought in to do literature reviews, research, and data evaluation to validate the response in producing the crop.

And for Gray there’s a simple link to it all.

"What do you eat that doesn't start, somehow, with agronomy?" Gray asked. "I have a screensaver that says: 'Agronomy, at the root of all that feeds the world.' How can you argue with that?"

Each step of her journey — from agriculture to music and back again — tells a unique story of home and family. The recognition of the Fellow Award proves those steps have been well-placed.

"I really respect my predecessors in this position. I carry them and their lessons with me into both the recognition and the responsibilities of the Fellows role," she adds as she works through where exactly she fits in, and how.

It will be easy to see Gray being as faithful — yes, loyal — to that challenge.

Just as she has been to agronomy, those who came before her, and John Deere.

What do you eat that doesn't start, somehow, with agronomy?