“What I love about farming is the land doesn’t know what color I am, it produces just the same,” says PJ Haynie.

Extra hurdles made Black farmers a scarcity.
Those left seek ways to balance the playing field for future generations.

“We’re endangered,” says Billy Bridgeforth, standing in a field of wheat on the northern Alabama farm he works with his brother, Gregg; sons, Kyle and Carlton and nephew Lamont. The Bridgeforth family is exceptionally rare as one of just a handful of U.S. large-scale Black row crop producers.

Like all those who work the land, Black farmers have clawed their way through drought, flooding, farm crises and trade wars to earn their place in the ever-shrinking farming community.

For all their farming grit, the numbers don’t quite add up for disappearing Black farmers. 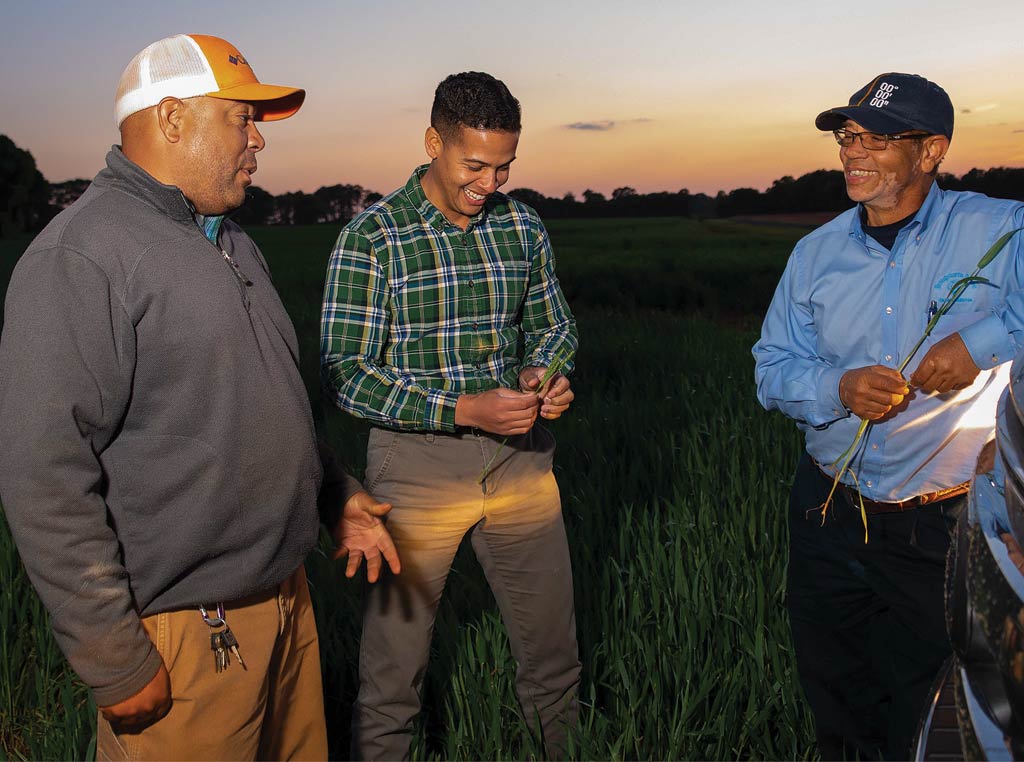 Pressure from outside forces often helps along any extinction. For Black farmers, the forces have been at work for centuries. Those forces helped make Bridgeforth and his family the last standing full-time Black family farm in the three northern Alabama counties.

It’s the exact same story for PJ Haynie and his father, Ricky, 750 miles away in Reedville, Va.

His great grandson, Ricky, nearly lost his farm. It narrowly missed foreclosure and auction—sale signs were posted—in the late 1990s.

This was the end result of retaliations after Ricky, “got too big for what the neighbors thought was OK for a Black farmer,” Ricky says.

Educated, smart and ambitious, Haynie was aggressively picking up land leases—like other farmers. Besides bullet-riddled tractors and a highly suspicious and devastating hog barn fire, a big hit came in the 1970s when 50 white farmers signed a petition claiming Haynie was using USDA money to drive up lease rates and run them out of business.

“The USDA then decided I’d outgrown family farm status—which was untrue—and cut off funding for buying seed and inputs. They had all my collateral tied up so I couldn’t get loans elsewhere,” he says, forcing him to lean on family and eventually bankruptcy to save his family’s farming legacy.

Similar stories can be told by countless Black farmers. Those who didn’t have backup options or legal assistance lost the farm. 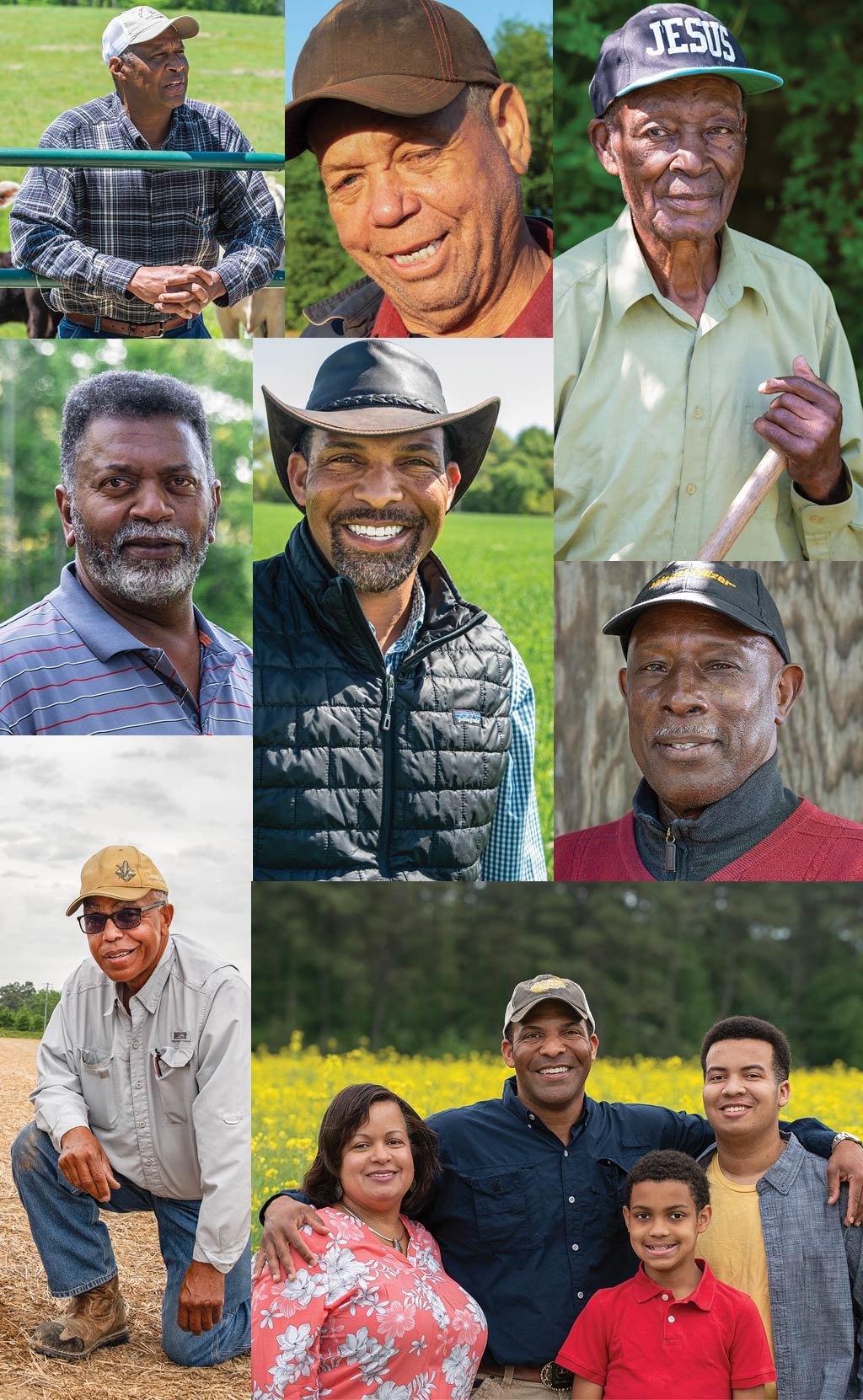 Surviving. A spry 98-year-old Dee Dotson parks his push mower for a quick chat on his small farm near Louisville, Miss. Frank Taylor marvels his uncle’s pristine garden is about a month ahead of where it should be by all rights. It’s a tribute to the agricultural prowess that helped Dotson not only persevere in farming, but also to win a wife, Taylor’s Aunt Omerio.

“She heard about how good my cotton was doing and said she had some ‘talk’ for me,” Dotson recalls with a devilish grin that belies the faith proudly proclaimed by his ‘JESUS’ hat. She’d been vetting him and he vetted her when she helped harvest the crop.

Dotson’s father was a sharecropper. Plantation owners kept the records—cost of inputs and crop sales. At the end of the season, the owners said what profits were. Sharecroppers Black or white never knew the actual numbers and rarely came out ahead no matter how good their crop was, Taylor explains.

Becoming indebted to the landowner and forced to work off the debt was known as peonage and was the fate of many Black sharecroppers, especially after Jim Crow segregation laws made it more socially acceptable to discriminate against them.

By limiting inputs, Dotson’s father minimized debt and risk of exploitation. He also slowed growth of generational wealth. Unimpeded white farmers made land investments that grew by leaps and bounds, putting them in a better position to buy more land and make improvements that in turn would maximize benefits from programs such as yield-based federal crop insurance.

Behind in the land game, “Mr. Dee” instead pushed forward by working multiple off-farm jobs in addition to growing crops. He came out OK, but he should have had much more for what he put in. 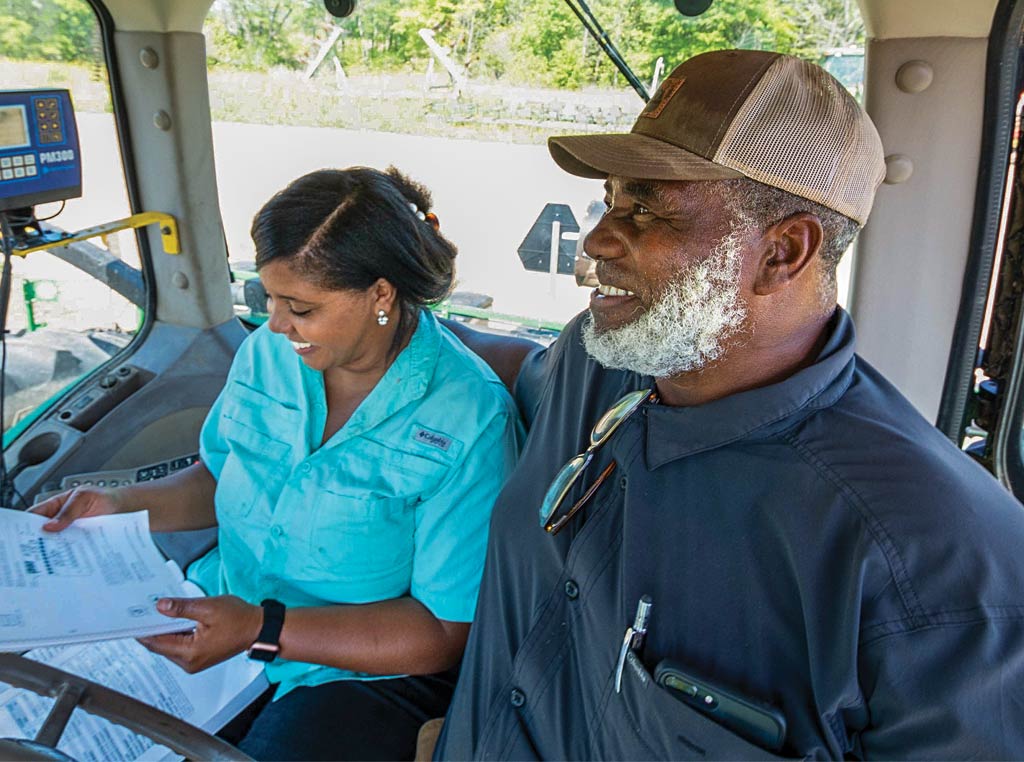 Despite top credit, James Bland’s banker said, “Isn’t that a bit much for you” when he wanted funds to buy a larger tractor for his growing farm. “There’s a glass ceiling for Black farmers,” he says. Christi and James Bland.

Risky business. The shadow of past treatment formed how Black farmers did future business. With debt historically being leveraged against them, Black farmers were less likely to take on government loans.

Those that did seek out loans and other USDA services were often denied per the 1982 US Commission on Civil Rights report. If they did get loans, all too often they lived to regret it. Between 2006 and 2016, Black farmers were foreclosed on six times more often than white farmers for their USDA loans.

Christi Bland and her father, James Bland, are yet another remnant in a once thriving Black farm community. They’re now the only full-time Black family farmers in their Mississippi Delta community.

As a female Black farmer—with a PA degree—Christi is a veritable unicorn.

The Blands and every other Black farmer interviewed cited the Farm Service Agency (FSA) county committees as a critical component in the eradication of Black farmers.

Created in the 1930s, elected committee members make decision on eligibility for various federally funded programs and their administration.

Black farmers weren’t on those committees even in areas with the highest concentrations of Black growers. Decisions on funding, foreclosure and access to foreclosed land were made by the competition, Christi says. Conflicts of interest and discrimination too frequently resulted.

“It’s the fox watching the hen house,” says PJ Haynie, who also farms in Arkansas as land is more plentiful and he gets the bonus of a Black farming community.

“Committees held up loans so a Black farmer wouldn’t get money to buy seed until June. The white farmer had his in 30 days,” he says.

“It’s an economic knee on our necks,” PJ says. 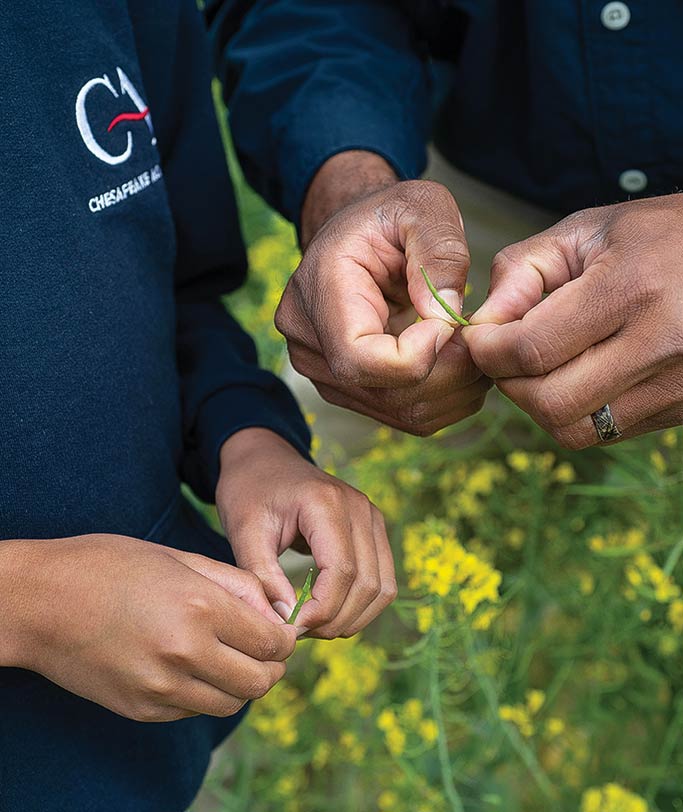 Joining up. Avoiding extinction will take creative thinking. Dotson set the example as a founding member of the Winston County Self Help Cooperative (WCSHC) in 1985. Originally banding together Black farms to get bulk input rates, it’s now a hub for education, programs and mentorship.

“Daddy told all us kids to go to college. Farming was just too hard,” says Alonzo Miller watching his herd built with the WCSHC heifer program.

It wasn’t only physically hard, it was spiritually hard for Black farmers.

“White farmer friends would tell Daddy there was cost share to dig ponds and improve the land. But when he went down to the USDA office, there wasn’t any funding for him,” Miller says.

Lost production and lost farms due to denied resources will weigh on Black farmers, continuing to hold them back for generations to come.

They protested. They successfully sued the USDA. Though they won, years later many hadn’t received settlements. To get his settlement, Haynie—the discrimination victim in the case—had to sign a document stating he’s ineligible for any USDA help. Ever.

PJ, Billy and Christi, who serve on the National Black Growers Council, say use of federal land could lighten the weight borne from past wrongs.

“Maybe Black farmers get the first chance at, or a reduced rate on, federal leases,” Haynie says. “Or a tax incentive if retiring farmers sell to young Black producers.”

It’s doubtful efforts could rebuild the lost community, but maybe the scales can be tipped enough to stem future loss of Black farmers. ‡ 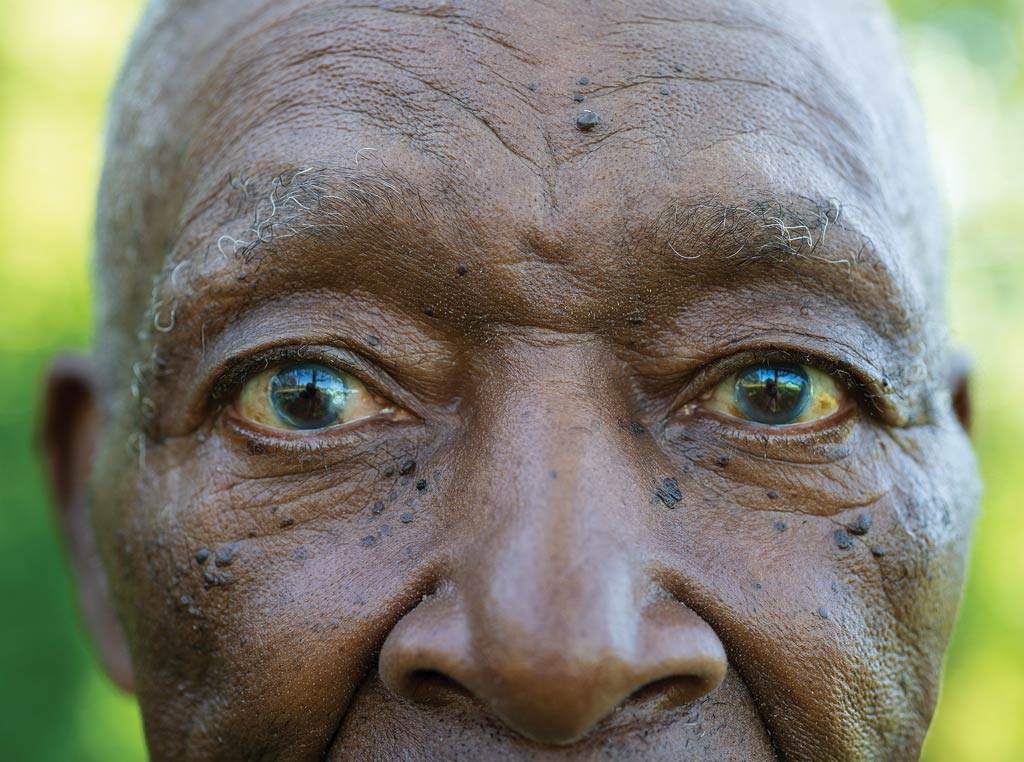 At 98, Dee Dotson has seen the gamut from name calling and lynching to more subtle economic discrimination. Though jovial, spry and having lived a good life, his family hopes more change comes in time for him to witness.

Down From The Mountains 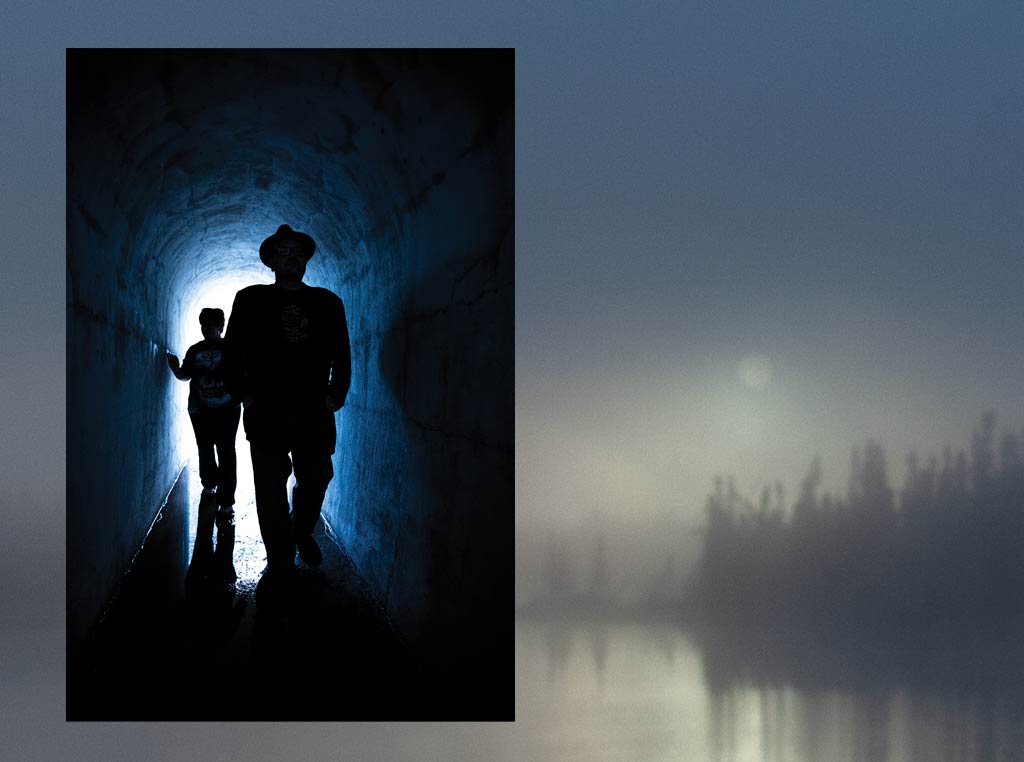