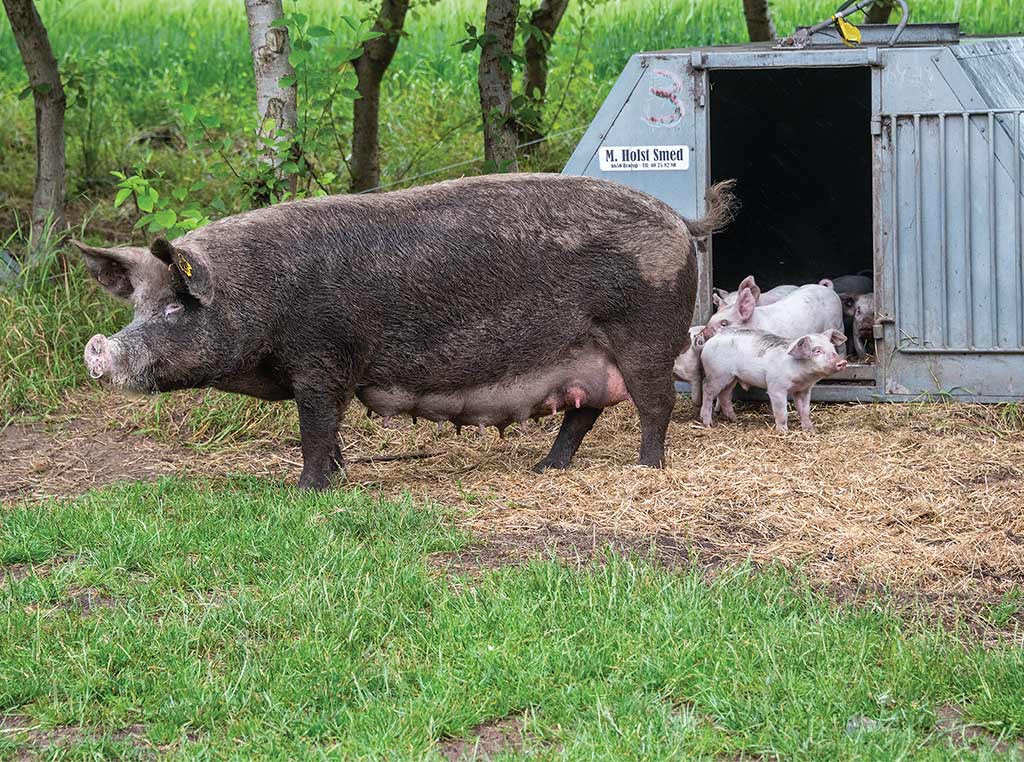 A sow and piglets take a quiet moment at their hut at Ulvehøjgaard, a free-range organic farm in Denmark.

Like vacationers in a row of lakefront cabins, Brian and Ingeborg Holm's sows stand proudly beside their individual huts, protected from a steady rain by tall poplars. A mob of piglets runs back and forth in the strip of trees like a pack of neighborhood kids, passing easily under the single-strand hot wires that keep the sows in separate, grassy lanes.

When it's time to nurse, some sows lay out on the grass. Others enjoy the shade of the trees, and still others go inside their steel huts. There, steep rooflines create snug refuge areas on either side to prevent piglets from being crushed when sows lay down.

Conventional Danish producers wean piglets at 4 weeks, while Friland, the organic label of the Danish Crown co-op that buys the Holms' pigs, requires 7 weeks with the sows. The Holms wean at 8 weeks, and are heading to 10.

It's a pig paradise—home to 600 sows and 12,000 piglets per year—that has earned high ratings for animal welfare at Ulvehøjgaard, the Holms' farm near Lindknud, Denmark. That, along with their antibiotic-free program and the marketing muscle of Friland, has guided 95% of the Holms' pork into export markets for the past 3 years. Most goes to the U.S., where organic pork earns a top price.

The pig paradise was a direct outgrowth of an effort to create a people paradise. Brian and Ingeborg, both raised on farms, wanted to give their children a rural upbringing, so they started building Ulvehøjgaard 30 years ago. 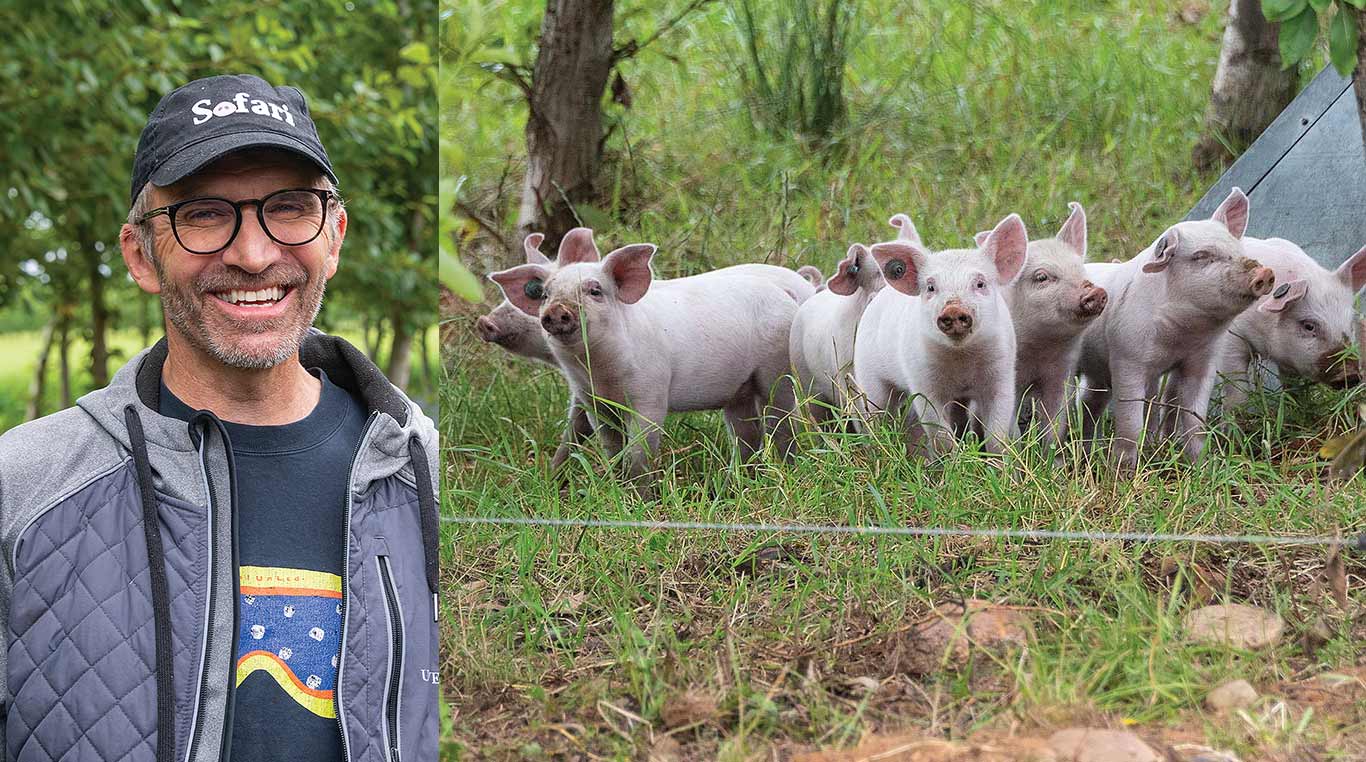 Above. Brian Holm (pictured) and his wife Ingeborg use antibiotics only on sick pigs, not in feed. Their pigs provide pork mainly to U.S. buyers eager for free-range, antibiotic-free meat. Piglets at the Holms' farm are weaned at 8 weeks, longer than their customer demands and twice as long as the average in conventional Danish production.

Antibiotic-free. Back then, Ingeborg tended 6,000 laying hens and Brian focused on 60 sows. Brian describes himself, Ingeborg, and their friends as idealistic hippies struggling to bring to life their vision for a new approach to hog production.

They started by trying to get away from feeding antibiotics and just using them as needed.

"In the late '90s, all the feed that was sold all over the world was mixed with antibiotics," Brian says. "And it was very, very hard—almost not possible—to buy feed without antibiotics."

The Holms eventually found a supplier in England that sold them antibiotic-free feed. In 1998, they took the next step and started sourcing organic feed.

Though organic, antibiotic-free feed is now available globally, feed remains a challenge for the Holms. The couple keeps a close eye on rations to keep their sows trim and active, but even so, free-range sows eat about twice as much feed as their confinement-raised counterparts.

That's expensive—organic feed costs about twice as much as conventional. American buyers pay enough of a premium to cover the cost difference, but Danish prices for organic pork wouldn't suffice.

To help control costs, the Holms produce about one-third of the grain they feed annually. "

We must produce grain," Holm tells a group of ag journalists. "We could also buy all this feed, but that's not very sustainable."

They also provide manure to neighbors who grow the rest of the grain their pigs demand.

Meanwhile, trees and grass amp up the farm's magic. Brian says he and Ingeborg planted poplar trees for their laying flock. When they got out of the egg business, they discovered that the sows liked the woods, too. They noticed the sows relaxing in the shade, scratching themselves on the trees, and snacking on leaves.

The trees also take up manure from the free-range pigs. Their roots extend deep in the soil to capture nutrients before they reach the groundwater, and extend about 15 feet beyond the canopy to reach more. When leaves fall in autumn, they cycle the nutrients to the surface of the soil.

Brian and his crew then drag the huts to a parallel treeline, string up the hot wires on a newly harvested grain field, and plant the manure-rich grazed field to grain. A 2-year rotation of pigs and grain breaks disease cycles, puts manure to work, and revitalizes the fields, Brian points out.

The stage is set for another year in paradise—for the pigs, the Holms, and their staff, many of whom switched from confinement jobs.

"It can still be frosty, and rain like today, but the sun can also shine," Brian says. "It can be very happy, very good days." ‡ 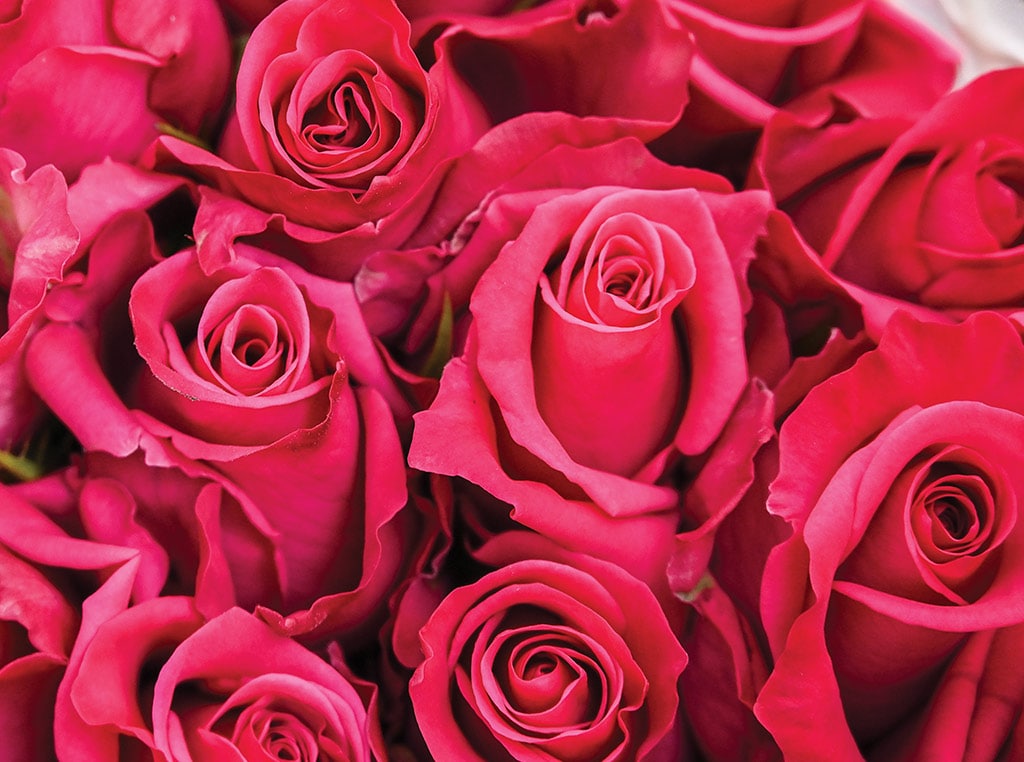 Growing the world's best roses high up in the Andes Mountains.