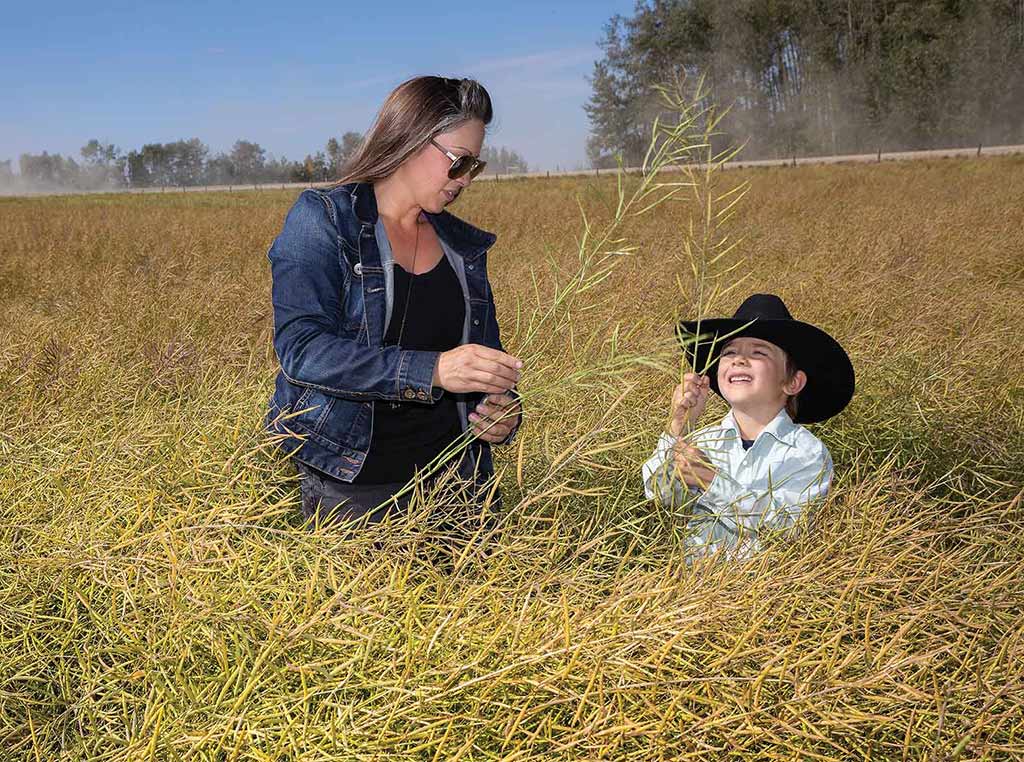 Melissa Damiani shows her son Wyatt how to tell if her canola crop is ready for a preharvest glyphosate application.

Can you apply preharvest glyphosate to control perennial weeds in pulse crops? Can you dessicate them with diquat (Reglone)? Can you use the plant growth regulator chloremquat on malt barley? If you aren’t sure, don’t feel bad, they have no definite answers. While all these products are registered for these purposes in Canada, many end users won’t buy your crop if you’ve used them. So be sure to chat with your grain buyer before you head to the field to spray.

It sounds complicated and it is. That’s why the Canola Council of Canada, Cereals Canada and Pulse Canada have combined their resources and developed keepitclean.ca, a website to help farmers make sense of it all. It’s a one-stop, easy-to-use website that growers can use as a reference guide to ensure their cropping practices meet their end users’ evolving requirements.

“The program’s message has been simplified down to five main points,” says Melissa Damiani, an agrologist and farmer from Bluffton, Alberta. “Only grow registered seed varieties and pesticides and other products that are registered for them in Canada; always follow the label directions; manage disease pressure; store your crop properly; and finally, deliver what you declared when you signed your mandatory declaration of eligibility form at the elevator.”

“In a lot of ways Keep It Clean is a belt and suspenders program,” says Allison Ammeter, a farmer from Sylvan Lake, Alberta and an Alberta Pulse Growers board member. “We all know we should do these things. I don’t think any of us would go, ‘I’ve never heard of that before.’ But this website says it concisely, in a really clear way, and it’s all in one place.”

The program was launched by the Canola Council under the Export Ready banner in 2006; the name was changed to Keep It Clean in 2013, says Brian Innes with the Canola Council in Ottawa. Cereals Canada and Pulse Canada came on board in 2016.

It was developed as a response to end users’ concerns about pesticide residues and disease levels in grain shipments today. If testing shows a sample exceeds the maximum residue level (MRL) that the destination country allows for pesticides, toxins and crop diseases, the entire shipment could be rejected.

In an ideal world all global trading partners would come to an internationally accepted consensus on what acceptable MRLs should be. But that’s not the case, so every country can set their own MRLs. If they haven’t set one for an ingredient that means there will be zero tolerance for it.

At one time a farmer might have been able to bend the rules but not anymore. Grain testing technology is now so sensitive and affordable that grain buyers, processors or end users can detect very low levels of pesticide residue, toxins and disease. Some compounds can be detected at just one part per billion (9 canola seeds in a super B transport) and others in the one part per trillion range (one square inch in 250 square miles). This means that farmers have to follow the rules if they want to keep international customers happy and maintain the country’s reputation as a trusted supplier. 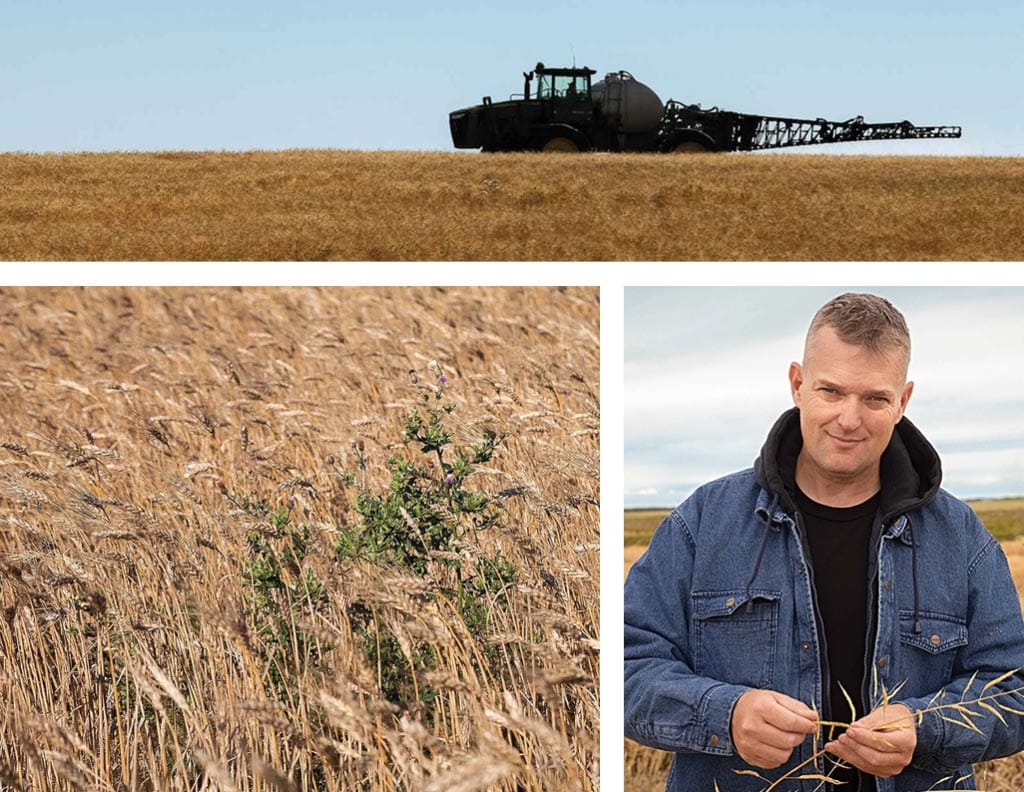 Perennial weeds like Canada Thistle can be controlled with preharvest glyphosate. However farmers have to make sure they follow label directions. There’s a calculator on the Keep It Clean website to help determine the preharvest interval. Clint Jurke with the Canola Council says it’s important for producers to follow the rules so our grain buyers don’t have any concerns over the products we sell them.

Keepitclean.ca flags problematic pesticides to raise producers’ awareness about using products that may cause marketing problems. For example: only use glyphosate for preharvest weed control in wheat, barley and oats once the seed moisture is less than 30% in the least mature part of the field. If you’re unsure what that looks like, use the photos on the website as a visual reference. But talk to your grain buyer before using it on oats; some buyers will reject them if they’ve been treated with it.

Glyphosate is registered for preharvest weed control in pulse crops in Canada but can’t be used as a desiccant. Some major markets have set very low MRLs for glyphosate though so it’s critical to respect the preharvest intervals. It’s still wise to check with your buyer before you apply it because some major markets no longer accept any pulse crop that’s been sprayed with glyphosate. Producers should check with their buyer before using diquat (Reglone) on pulse crops too.

Keep It Clean reinforces the message that when we’re producing food, the people we’re producing it for have requirements on it too, Ammeter says. Farmers not only need to follow Canada’s rules to produce it but need to find out where their crop is going to and be aware of any market access issues and consumer demands they might have on it before making farm decisions.

“If the yellow peas I grow on my farm are damaged by an early frost they’ll likely go to a local hog farm because the hogs won’t care what they look like,” Ammeter says. “A high-quality crop might be sold to a buyer in England or France and have to meet some pretty high standards. If they are shipped to China, or India, they’d have to meet their MRL standards too. We have to make sure we are compliant because if we don’t meet standards on the current sale we might be destroying future sales of the crop to that country too.” 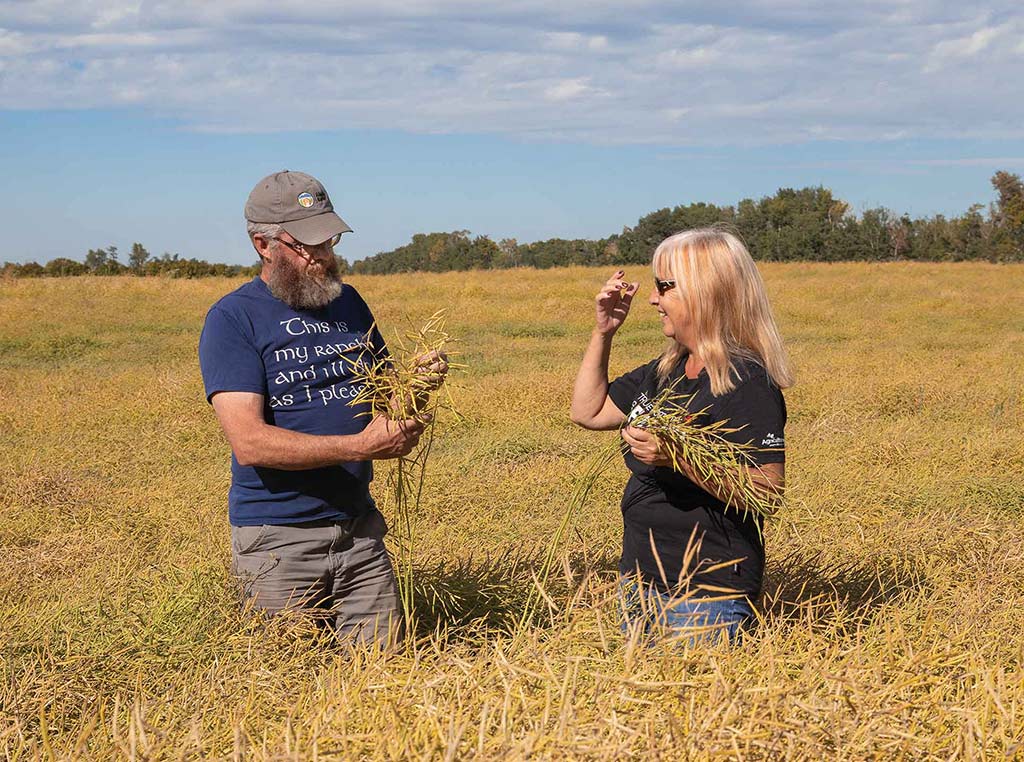 Allison and Mike Ammeter check the stage of their canola field. Allison says the Keep It Clean program reminds farmers that the people who buy our crops have their own requirements. 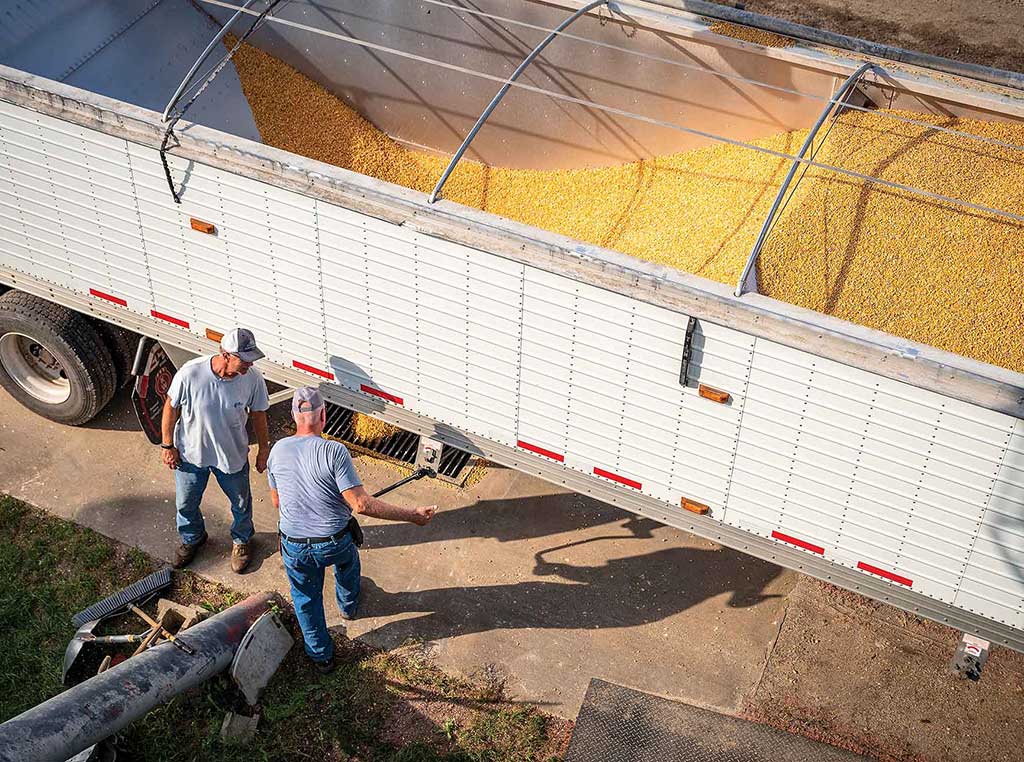