Does healthy soil produce healthy food and then healthy people?

There's a growing realization among consumers that all foods are not created equal—and that's presenting a growing opportunity for farmers focused on soil health. Some of those farmers are finding that healthy soils payoff in more ways than they first thought.

“Consumers perceive a difference in food grown on healthy soil, and that's why they're willing to pay us $85 for a turkey compared to $25 for one from a grocery store,” says soil health pioneer Gabe Brown. Brown's son Paul markets livestock, poultry, honey and other products from the family's North Dakota farm under the Nourished by Nature brand (nourishedbynature.us)

The Browns, who sell pork chops at $19/lb and eggs at $4.85/dozen—four times the typical grocery store price—make no apologies for the markup. “We sell all we can produce,” says Gabe.

“We believe the quality of the food we raise depends on the quality of the soil on which it is grown or raised,” adds Paul. “Healthy soil leads to healthy plants, healthy animals, and healthy people. Our biologically active soils produce foods that are higher in vitamins and minerals and those are passed on to consumers who eat it.”

Nutrient density is beginning to look like more than a marketing pitch. Lab results from several researchers are confirming the link between healthy soil and healthy food and are hinting that the final link to improved human health also exists.

“The direct relationship of human health with soil health is an emerging area of study, but initial data suggests humans can also benefit by the consumption of plants or meat and milk from animals that were fed phytonutrient-rich feed,” he adds. 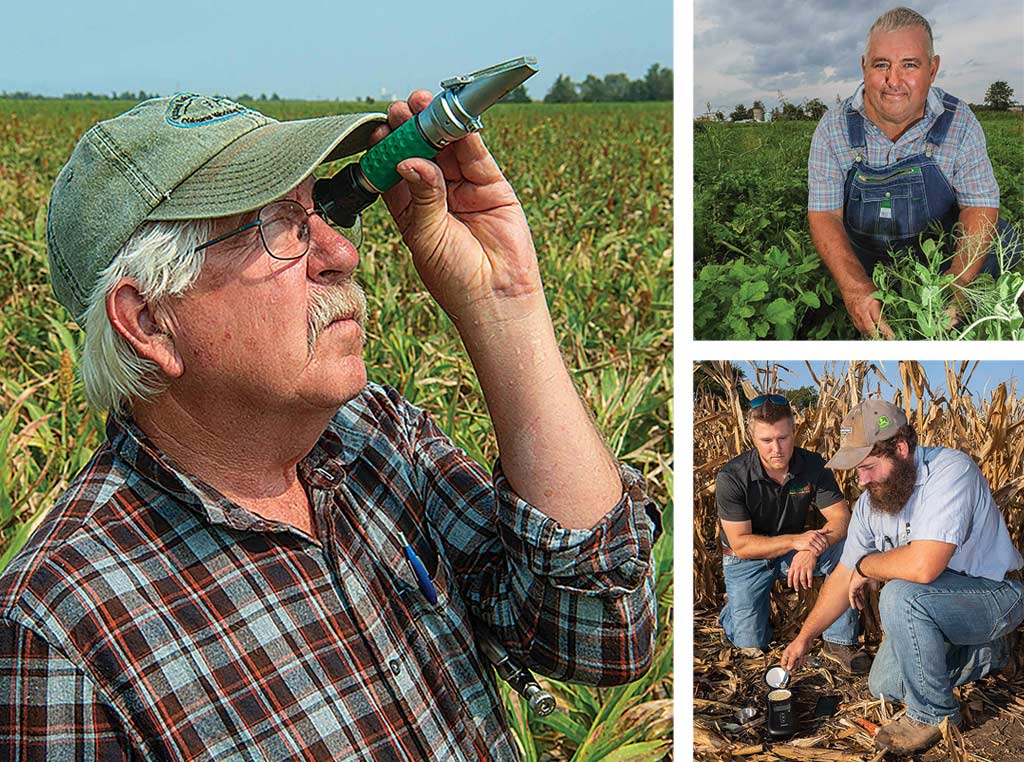 “We've found significantly greater levels of protein, amino acids and nutrient density in samples of corn and soybeans grown under a no-till/cover crop system,” says Islam, who compared samples to those taken from fields under conventional management.Grain samples were analyzed for 28 amino acids and a dozen macro and micro nutrients and the findings used to develop a food quality index. “Samples from no-till/cover crop systems scored significantly higher than conventionally-tilled systems and somewhat higher than systems using either no-till or cover alone,” says Islam.

“The protein content of our corn is running from 9-11% and soybeans are several % better, so we're getting a premium of $.40 and $1.35/bushel respectively from a nearby hog feeder. The beef we market directly also tests higher in protein and amino acids and is earning us $.20 per/lb more on a live weight basis. People are beginning to appreciate the value of quality food and are willing to pay,” says Brandt.

In the field. While a detailed analysis of nutrient density requires lab testing, growers can gather some basic data on the quality of their crop by using hand held devices in the field. The simplest of these is the Brix Meter, a refractometer long used by wine makers and others in the fruit and vegetable industry. Basically, Brix is a measure of how far light is deflected while passing through a liquid. In the case of plants, the liquid is squeezed from leaves and the refraction varies by the concentration of sugars, vitamins, amino acids, minerals and other solids in the juice.

Partridge, Kansas, farmer Jim French uses Brix measurements to determine the quality of his forage when planning grazing rotations. “On a healthy soil, the score will be 1 or 2 points higher on the Brix scale. That tells us there's more nutritional value in every bite that our cows take, so they'll eat less forage and we can plan on not having to move them as quickly," says French.

French says he's used the Brix meter a couple of years, but it's already proving to be a way to help get more benefit from the improved soil health that he's been able to build. Expect to pay roughly $150 for a kit including the instrument and vise grips modified to squeeze juice from plant leaves.

The GrainSense Analyzer (left) and Bionutrient Meter (right) are two tools that allow farmers to quickly determine the quality factors in their grain and other products in the field.

The ability to measure nutrient density of his grain and oilseed crops in the field provides Lincolnville, Kansas, farmer Clint Kroupa information he needs to fine tune his marketing decisions. Kroupa uses a GrainSense Analyzer to provide that information.

The handheld sensor uses near-infrared spectroscopy to determine the protein, moisture, oil and carbohydrate contents, then relays the georeferenced results to a cloud storage service through a mobile phone app.

“We're diving into regenerative agriculture," says Kroupa. “This year we planted green by seeding corn into growing triticale. In time this approach will improve our soil health and one of the benefits of that is increased grain quality," says Kroupa. “By testing in different areas of the field—or areas under different management—we're able to segregate higher protein wheat to take advantage of premiums in that market and also to utilize our highest quality corn through our feedlot."

Travis Kraft with Elevate Ag (elevateag.com), helped Kroupa utilize the sensor, which costs $4,300. “The unit can be used on wheat, barley, oats, rye, rapeseed, corn and soybeans. Only a small grain sample is needed and grains with larger kernels are put through a small grinder before testing," he explains.

Dan Kittredge is executive director of the Bionutrient Food Association (bionutrient.org), a non-profit focused on food quality and the role soil health can play in correcting dietary shortfalls. The association has launched the Real Food Campaign and developed the Bionutrient Meter ($377) to that end.

“The meter gives farmers a method to analyze the nutrient density of their crop and consumers to do the same in a store or farmers' market. It is a handheld spectrometer that flashes a light at a sample and then reads what bounces back to measure the elements and compounds it contains," says Kittredge.

The association kicked off their campaign in 2018 by using the meter to demonstrate the nutrient variability in two products—carrots and spinach—gathered from 50 stores and 68 farms and gardens in seven states. “In carrots we found as much as a 200:1 variation in polyphenols (organic compounds thought to help with digestion, diabetes and cardiovascular issues) and 90:1 in antioxidant. In spinach the variation was 75:1 and 90:1 for those traits respectively," says Kittredge.

The work continued in 2019 when the meter was tested and calibrated on four additional food products and last year the list was expanded to 20, including wheat, oats and potatoes. Plans are to expand to corn and soybeans, beef, chicken and milk as soon as funding allows. “We're seeking growers to help identify management practices that produce the highest quality crops by sending us samples during the season along with a soil sample at harvest," says Kittredge. “This will help us understand the links between nutrient dense food and soil health (realfoodcampaign.org).”