Important note: The original version of this article contained a statement about the suitability of yak meat for people with Alpha-gal Syndrome (AGS). AGS, or red meat allergy, is a potentially life-threatening allergic reaction. The U.S. Centers for Disease Control and Prevention recommends people with AGS avoid meat and other products that contain alpha-gal. If you have AGS, please consult an allergist before consuming yak or other meat.

Cantering down the slope of a mountain pasture, Firebird Farms’ yak herd is an intimidating—but oddly comical—sight. Imagine a mob of woolly 800-pound goats charging to nuzzle visitors with their massive heads and scimitar horns.

“Their personalities are really diverse and noticeable” says Sophia Weiss, who owns an 80-head breeding and meat operation on 230 acres above Ashland, Oregon, and sits on the board of the International Yak Association.

Weiss started her herd in 2014. “I had a desk job,” she says. “I couldn’t have an animal that required attention or protection.”

Yak, with their formidable horns, mothering instincts, and intelligence, filled the bill. Weiss appreciated their thriftiness, the result of compact size and their highly efficient rumen. And because she was raised Buddhist in southern Oregon, she felt a cultural connection to the Tibetan creatures.

Weiss is also a huge fan of yak meat, which she sells by the cut or in Yak Packs online and at a local farmers’ market. Sweet and mild, yak has less intramuscular marbling than beef, but because each cell traps moisture, yak meat is both lean and juicy. It is also high in iron.

“The lowest-hanging fruit are the foodies,” McCoy points out. “These are the people that are paying attention to food trends, who want to try new things.

“After that, there are the athletes and people that care about their health,” he continues. “The third big bucket is the long game, and that’s the environment.” 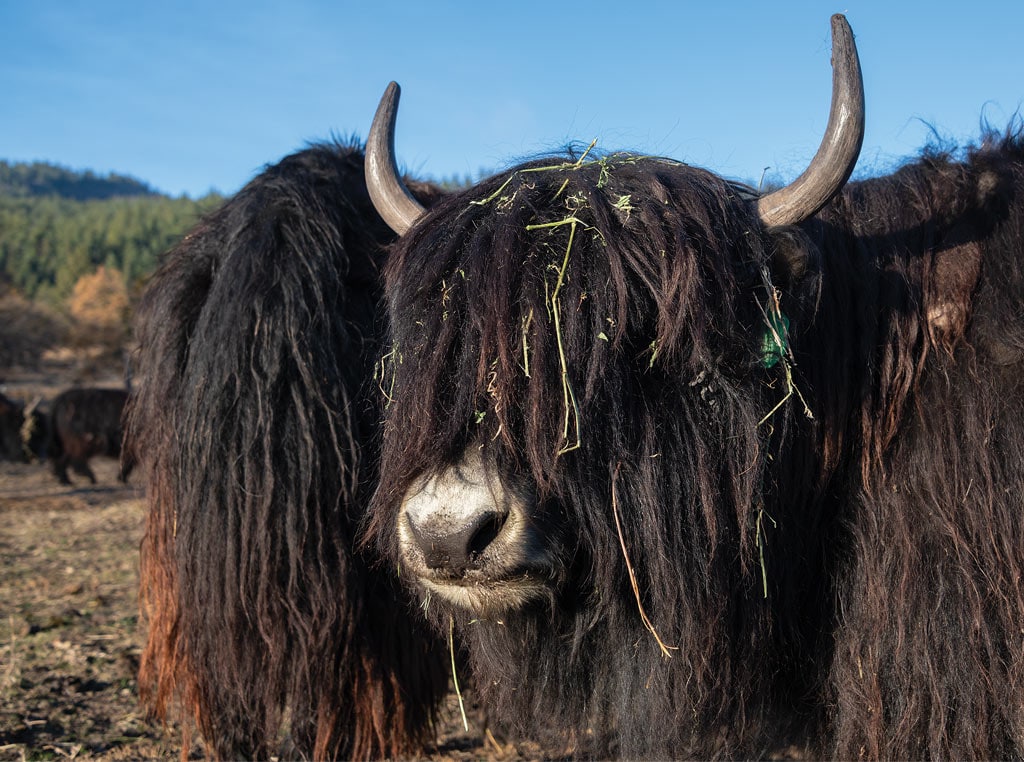 This striking yak is a prize for a fiber producer. 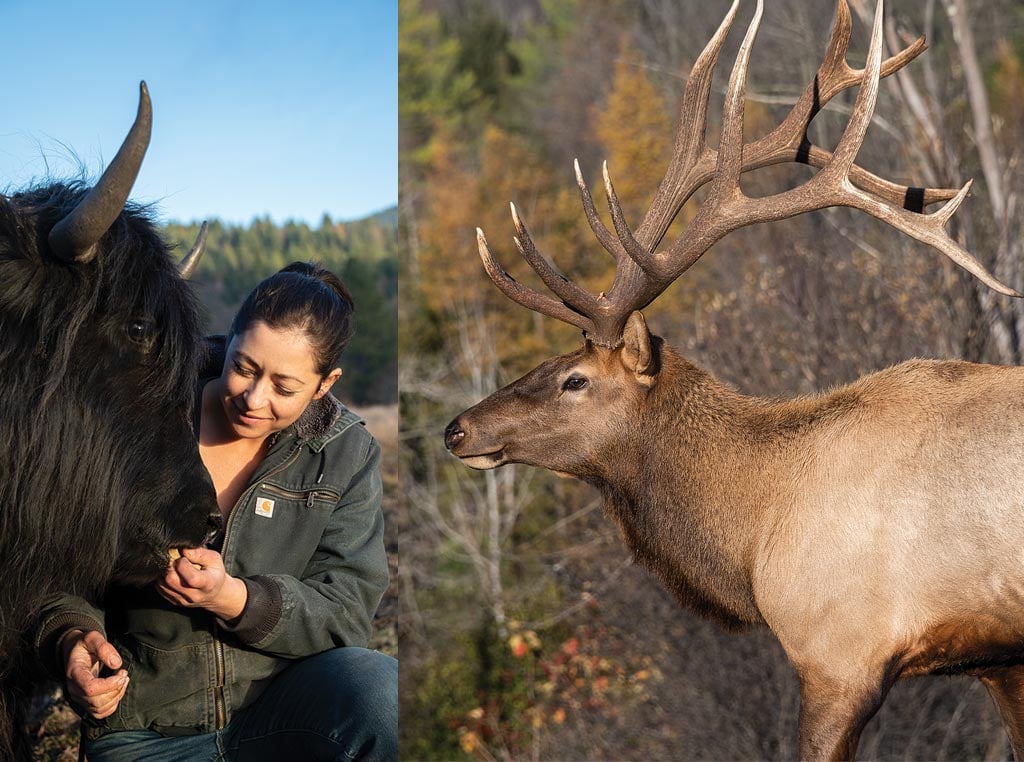 A bull elk at Vermont Heritage Elk rules the pen. Sophia Weiss breeds her yak in Oregon for mild temperament.

Small footprint. Like yak, ostriches have a relatively small environmental footprint. Their digestive systems produce little methane, and their dietary flexibility allows McCoy to feed local beet pulp and spent brewers’ grains. With their low water and space demands and a feed conversion ratio of 4 to 1—about the same as pork—ostrich appeals to environmentally conscious consumers like McCoy himself. But, like yak, meat ostrich genetics are still a work in progress.

“Our ostriches today look like chickens before Tyson and Perdue came along,” McCoy says, noting that the birds were bred for feathers and hides, not meat. “We’ve got 1946-style chickens here.”

Yak are every bit as primeval. Nomads on the Tibetan Plateau bred yak as a multi-purpose species, using them for their rich milk, warm fiber, and pack animal strength as well as for meat, says Weiss. Since yak first arrived in Canada in 1922, North American yak ranchers here have, too.

That means there is a wide range of phenotypes. Weiss—who says she “nerds out on genetics”—feels a sense of responsibility to breed not just for mild temperament and a meaty carcass, but for all sorts of traits to help keep the shrinking gene pool diverse. There is little to guide her.

“It was a subsistence animal, so it was just passed down,” Weiss says. “It’s not like someone writes a book on how to be a nomad.” 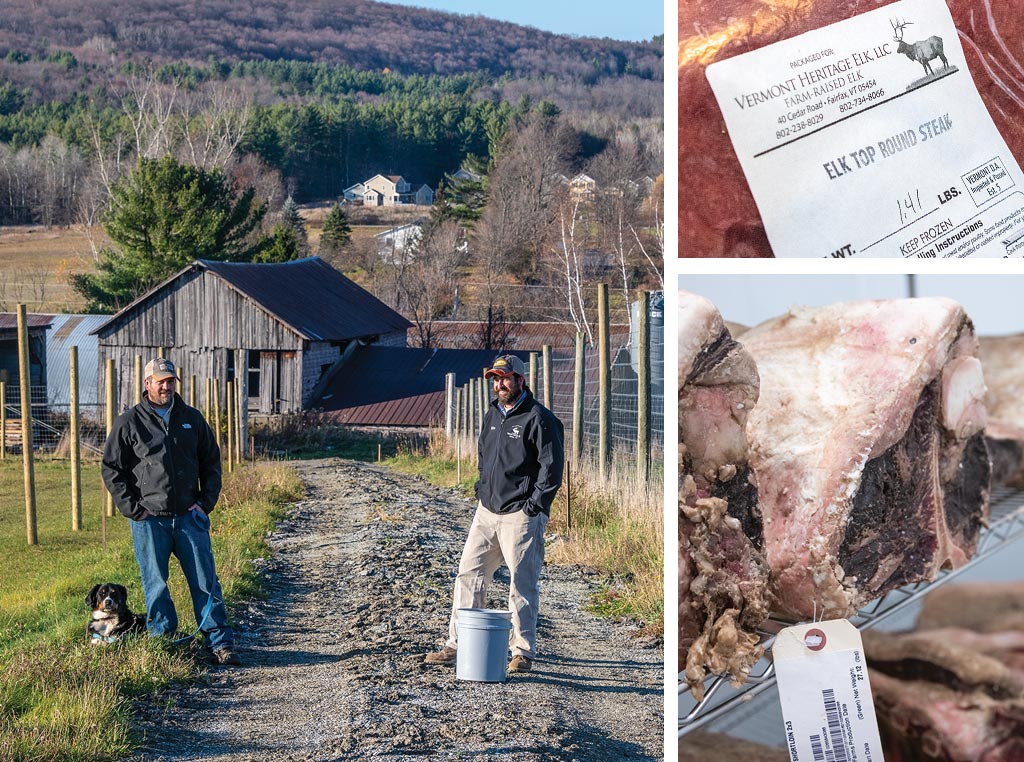 Ben and Dylan Palmer built miles of sturdy fence for their elk operation in Vermont. Elk meat is healthy and delicious. Beef dry-ages at Nicky USA.

No manual. Operating without a manual appealed to brothers Dylan and Ben Palmer when they created Vermont Heritage Elk on 92 acres of what was once the family dairy near Fairfax, Vermont.

“We settled on elk because it’s a niche market, and it’s engaging,” says Ben, who is also a dairy nutritionist. “There’s a lot of aspects of raising elk that are not in a textbook, so it keeps the challenge and interest there.”

The Palmers spent two years learning from a nearby mentor. They learned how to lay out pens to provide a combination of forage and tree cover, and to handle the huge, dangerous creatures.

“They’re not the type of animal you can just bully around and push or lead,” says Dylan, an engineer. “You’re working to try to figure out what the animal wants to do to get it to go where you want.”

That takes planning—sometimes weeks in advance, sometimes months. For instance, the Palmers simply don’t enter the pens during rut. Period. There’s a window for safer handling before calving, so they will open up the chutes weeks in advance so the elk can get comfortable with the equipment, then bait them in when it’s time for handling.

They also learned how to work within extensive laws designed to keep farmed elk away from native cervids like deer and moose, and how to market elk’s healthy meat.

“We’ve been selling by the cut,” Dylan says. “It puts elk into more hands, onto more plates, than trying to sell an entire animal.”

Maui Nui venison is a tasty way to control an invasive species in Hawaii.

Wild opportunity. Geoff Latham of Nicky USA in Portland, Oregon, started his meat marketing career selling rabbits out of the back of his car. He’s built a following for his lamb, pork, poultry, and dry aged beef, as well as a range of specialty game meats.

Perhaps most special of all is Maui Nui venison. Latham and his Hawaiian partners have turned an invasive species—axis deer, which have been chewing their way across Hawaii since 1959—into a wild-harvested delicacy.

“It took two or three years to get a protocol set,” Latham says.

Hunters only hunt at night to reduce stress, target animals that are standing still, and shoot only when they can drop a deer with a single round. Customers treasure the delicate meat, Maui ranchers appreciate the effort to reduce the strain on forage, and ecologists applaud the effort to reclaim the island from the invaders.

Scott Budden empties a floating bag at his oyster farm on Chesapeake Bay.

Water man. Half a world away, Scott Budden is part of the Chesapeake Bay’s developing oyster farming industry. George Washington relished wild Chesapeake oysters, but wild stocks have collapsed over the generations.

Over the past six years, he’s found that there is a lot of nuance in raising creatures that simply sit in their bags and eat whatever floats by. Oysters that grow in floating bags tumble around, sculpting deeply cupped shells perfect for oyster bars. Oysters in submerged bags grow quickly, but their gangly shells land them in the pre-shucked market.

Crickets and soldier fly larvae mature in four to six weeks, and can achieve a conversion ratio of 1.7 to 1 on a wide range of feed. Wilson is patiently educating consumers so his insects evolve from novelties to health food staples—as crunchy snacks or finely ground flour boosting protein in smoothies and snack bars. 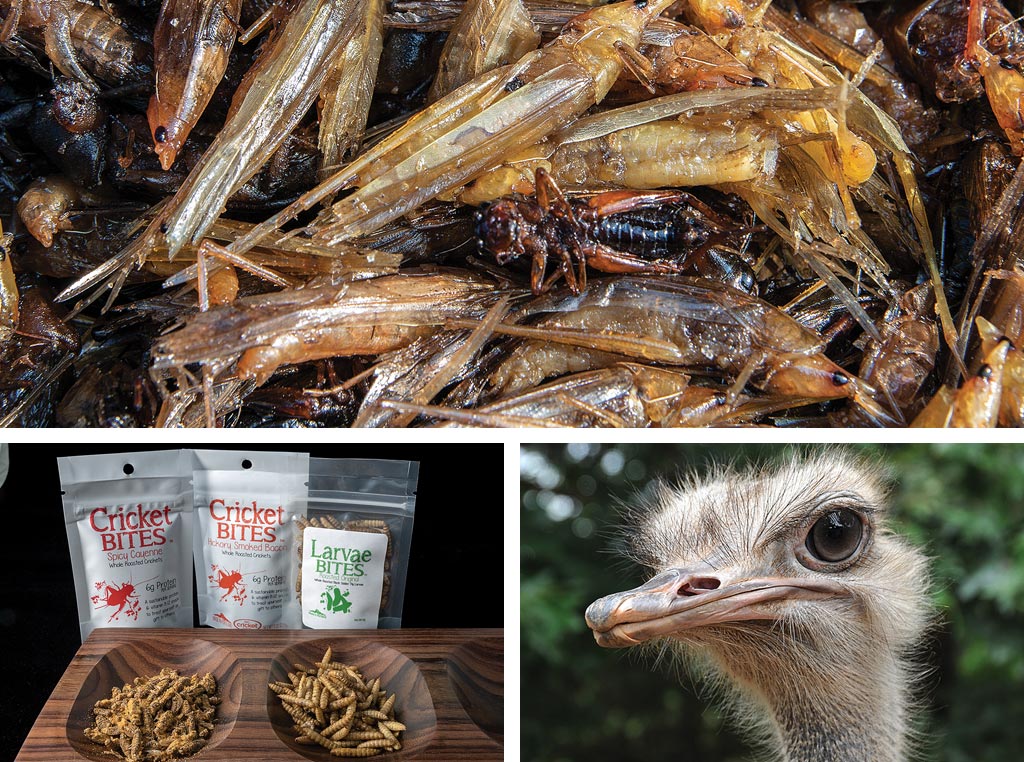 More than 2 billion people eat insects, including these at Bangkok’s Khlong Toei Market. Roasted crickets and soldier fly larvae have a smoky flavor and protein, vitamin, and mineral profiles similar to meat and fish. Ostrich is lean, rich in iron, and prized by foodies and athletes. 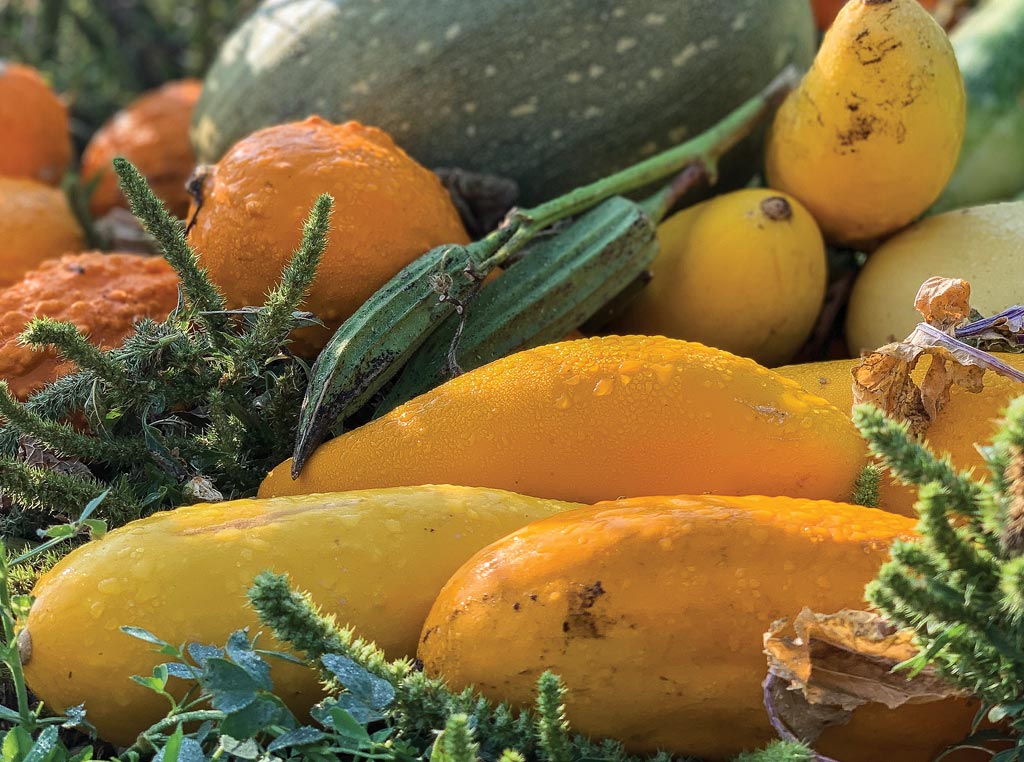