The milpa garden, a mass of biodiversity with dozens of species growing together, can produce a variety of vegetables and fruits on a large scale with little to no insecticide or herbicide inputs

It was 1919 when the term “Victory Garden” first appeared on the American scene, a term intended to inspire U.S. citizens to turn every spare remnant of land into a source of food to help win the Great War. The Victory Garden came back during World War II and hit its peak of popularity when an estimated 20 million plots of land were tended.

Fast-forward a century, and there is a New Victory Garden finding its place on the U.S. landscape, helping provide food security in an era where a much more elusive enemy—COVID-19—is making its march around the globe.

Fittingly, this new type of garden looks to be a guerilla tactic; not a neat row of plants aligned with the compass, but a tangled and jangled affair in which harvesting becomes a process of “hunt and pick.”

It’s called a “milpa garden.” What is milpa, you ask? The definition of that word is a rambling and intertwined task as well.

Mil-Pa is a word (or word phrase) in Nahuatl, the administrative language of the Aztec Empire. In its most austere form, milpa translates to “cultivated field.” For many areas of Mexico and Central America, it is the word assigned to a field of maize. In the way things have been done since the days of the Maya, however, a milpa typically grows squash and beans along with maize—the “Three Sisters” concept. This companion planting not only provides a balanced diet for its human population, but it is arguably the most successful attempt at sustainable agriculture in this hemisphere. Researchers say there are fields in Central America that have been under cultivation with this practice for 4,000 years—with no loss in productivity.

Born of chaos. When Jimmy Emmons plants a milpa garden on his Leedey, Okla., farm, it is a whole lot more than Three Sisters; it’s a whole darn family reunion. There are cucumbers and squash (both winter and summer varieties); pumpkins and melons (watermelon, cantaloupe, honeydew); collards and Chinese cabbage, radish and turnip, beans and okra. The list goes on, with the milpa garden supporting about 30 edibles. There are ornamentals, flowers, and ground-cover plants in the mix as well, boosting the number of companion species past 40 in this mega-milpa.

Emmons often gets the credit for being the spark behind the milpa movement in the U.S. A couple of years before the pandemic, he and fellow Oklahoman Trey Lam discussed ways they might help provide fresh vegetables to food banks and underserved individuals. “I thought about the ‘chaos gardens’ that Gabe Brown was planting in North Dakota,” Emmons says, referring to the soil-health pioneer’s practice of mixing various garden seeds and drilling them into an acre or two of land to grow a no-fuss garden. Emmons reached out to Green Cover Seed, a Bladen, Neb., company founded by Keith and Brian Berns. Green Cover Seed put together a blend for the Oklahoma project, but Keith Berns suggested a name change.

“I had been reading the book 1491 by Charles Mann,” he recalls. “The book talks about the multispecies approach that was common in Mesoamerica before the arrival of Columbus. We wanted to put together a mix of species that did not portray ‘chaos;’ we wanted to show that a diverse plant community could be highly productive,” he says. “Milpa is a term that has been around for hundreds of years, but it was a perfect term to describe this type of production.”

The milpa mix worked well in Oklahoma; Emmons seeded a 3-acre patch in a creek bottom, a remnant field cut off by a state highway, providing easy access for volunteer gleaners to harvest the produce. On one particularly good morning, the harvest crew brought 1,600 pounds of vegetables, which were donated to a regional food bank. “The response was really dear to our heart,” Emmons says. “Some of the elderly folks receiving food boxes had tears in their eyes seeing fresh-from-the-garden vegetables. Varieties such as okra seemed to bring back a lot of memories.”

Ryan and Jennifer Speer harvest vegetables and fruit by the laundry basket load and distribute to underserved Kansas citizens. Keith Berns offers an acre’s worth of free milpa seed in a program called First Acre.

First Acre. Green Cover Seed took notice of the response and rolled out a program called First Acre, in which the company donates the first acre’s worth of milpa mix if a grower agrees to arrange for the produce to be donated to a food bank or other entity helping provide local food security. “We also encourage growers to work with local civic groups, church groups, or youth groups to help harvest the produce,” Berns adds. “We need all the community building we can get in this era of COVID so we hope they will build community around the milpa. And they are helping feed needy people in the area as well.”

Milpa gardens are starting to take off. In Oklahoma, the number has grown from the original two milpa seedings by Emmons and Lam to 37 such efforts in the 2020 growing season. Green Cover’s First Acre project provided about 500 acre’s worth of milpa mix for 2020 to growers across the U.S.

“We intend to offer the program again for 2021,” Keith Berns says. “We plan to offer enough milpa seed for about 1,000 acres.” For information on the First Acre plan, and details on ordering seed, Berns suggests a visit to milpagarden.com. 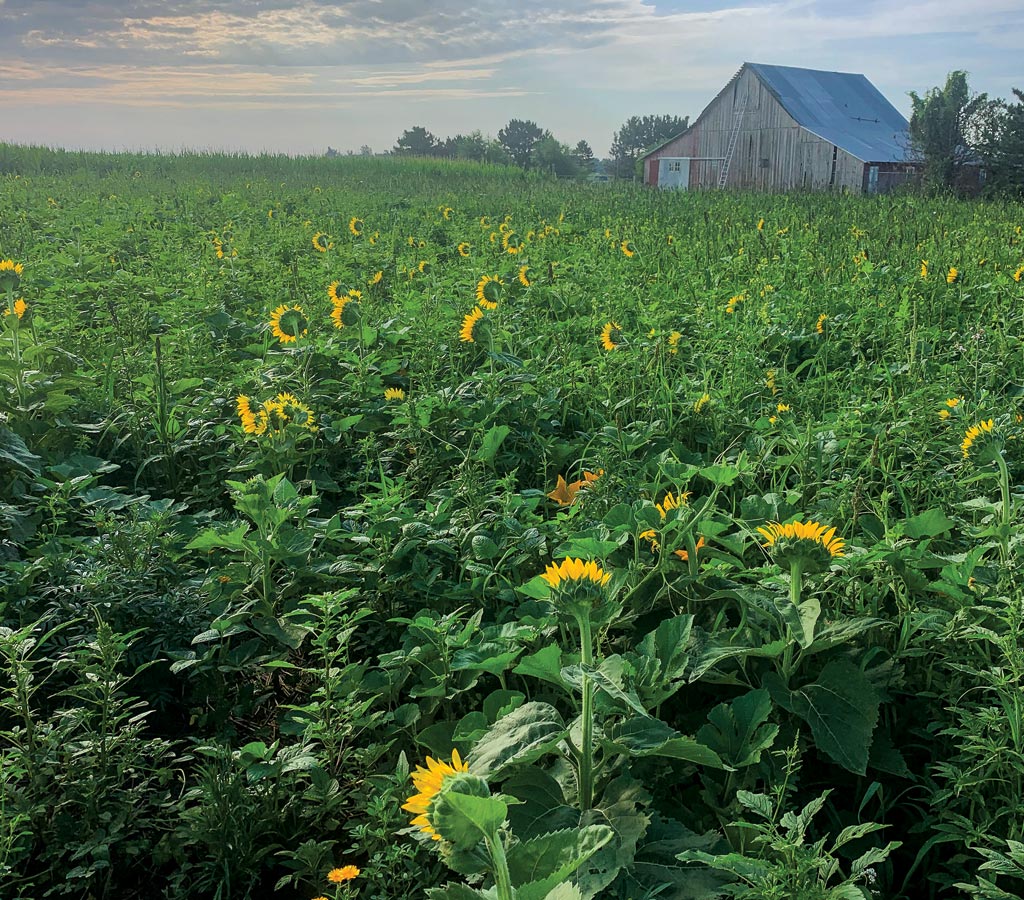 A mixed planting of vegetables, fruits, and flowers provides a unique beauty on this Kansas farm.

Power in diversity. Inspired by Emmons, Ryan Speer now spares an acre or two of land near Sedgwick, Kan., for a milpa planting. This is a joint effort—“I grow it and my wife, Jennifer, has connections in the community where we deliver the produce,” he says. Jennifer, who works in the health care field, provides the vegetable and fruit bounty to entities such as a women’s shelter, a men’s shelter, Salvation Army, and other such providers.

Speer, who is a soil-health advocate, says the gardens have another payoff—they teach an object lesson to the grower in such things as improved microbial activity in the soil, attracting beneficial insects and pollinators, nitrogen fixation, and—perhaps most importantly—the power of diversity.

“It has been interesting to watch the interaction within the plant community of the milpa,” he says. “You may see some evidence of nitrogen deficiency in the squash leaves, for example, but then the cowpeas kick in as their roots start to nodulate and produce nitrogen. Within a week or so, the leaves on the squash and cucumber turn a bright green.”

Similarly, beneficial insects and pollinators have provided an on-going lesson for Speer. “We don’t spray with any insecticide, but we produce squash when other gardens are losing them to squash bugs,” he points out. “And you would not believe how many bees are out there when the flowers start to bloom. It’s pretty neat to watch.” Despite the many advantages of a mixed planting, there still are challenges in growing a successful milpa garden. As with just about any ag enterprise, water and weeds can limit yields.

Jim Ristau and his mother, Lois, planted a milpa mix on 5 acres of calving pasture on the family’s South Dakota ranch, producing a bounty of pumpkins, squash, and ornamentals despite fighting some weed concerns. 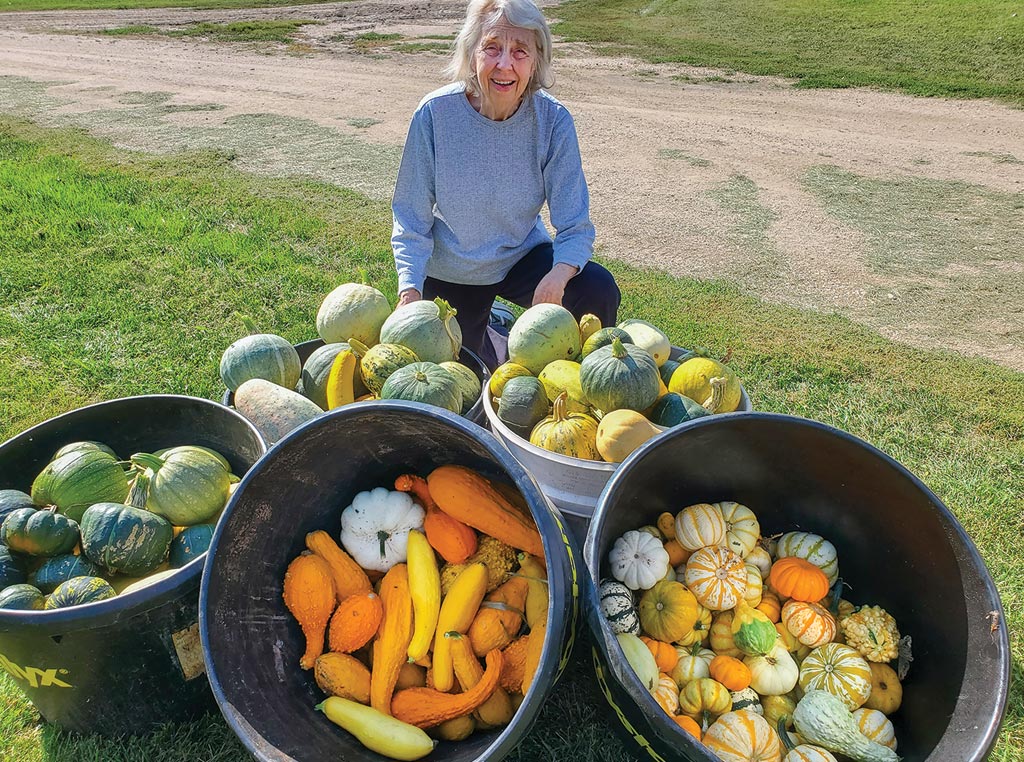 Jim Ristau, who serves as director of sustainability for the South Dakota Corn Growers Association, planted 5 acres of milpa on his family farm for 2020, putting parts of a calving pasture to use as a summer home for vegetables and fruit. “Weeds were our biggest concern,” he says, although the plots did produce yields of squash, pumpkins, and gourds.

He’s studying the ways other milpa growers are controlling weeds, such as no-till drilling into cover crops of rye or winter barley. “We’ve still got a lot to learn about weed control, but we’ll try to grow milpa again this year,” Ristau says.

“These things happen in dryland farming,” he says. “The milpa gardens have a lot to teach us. The original prairie had 500 or more species working together. We can learn from that.”

Ornamentals can be a popular component of a milpa garden. Seed mixes show the incredible diversity of dozens of species. Even a remnant acre can produce tons of produce.