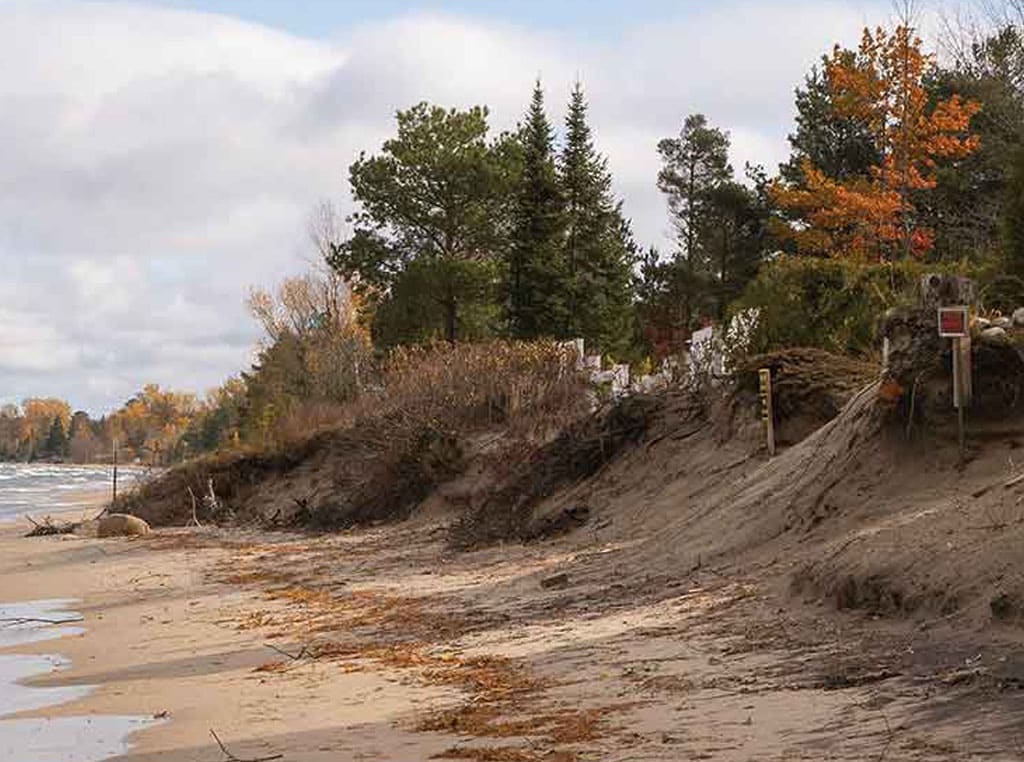 The Hell of High Water

The sound of waves lapping gently on the shore is a feature in relaxation apps. But if the waves are crashing against your home, all you feel is anxiety and fear.

The Great Lakes are full. The Lakes’ watershed has experienced the wettest five years in history. They’re now at their highest levels since 1986. Most of Michigan’s beaches are under water. Lake Michigan’s 5.5 feet rise at Chicago forced the city to install flood barriers. Repairing high-water damage to municipal infrastructure, parks, roads and bridges in Canada and the United States will cost hundreds of millions of dollars.

“Water levels in lakes start to increase typically in spring and whenever rainfall in their watershed outpaces evaporation losses; then drop when evaporation dominates, primarily in the fall,” says David Sweetnam, CEO of Georgian Bay Forever in Toronto, Ontario. “Climate Change models show the swings will become more extreme with higher peaks, lower dips and increased wind speeds. To manage risk, coastal infrastructure designs will need to be robust and flexible enough to accommodate seven-plus foot swings instead of ones in the historic 6.33 foot range we have already experienced.”

For thousands of property owners along the lakes’ 10,000 miles of shoreline, it’s not a simple fight or flight scenario. For most, their homes represent both their life savings and their roots; walking away can mean losing everything.

Sarah Delicate has been fighting for her home, family and community since the floods hit. In 2017, while her children’s father was dying of brain cancer, the water level in Lake Ontario behind her Clarington, Ontario home was rising ominously. Then a storm struck waves rushed over her breakwater and hit her house. She had no idea what to do. She’d owned her home for almost 20 years without flooding; there were no records of any since the town was founded in 1828. 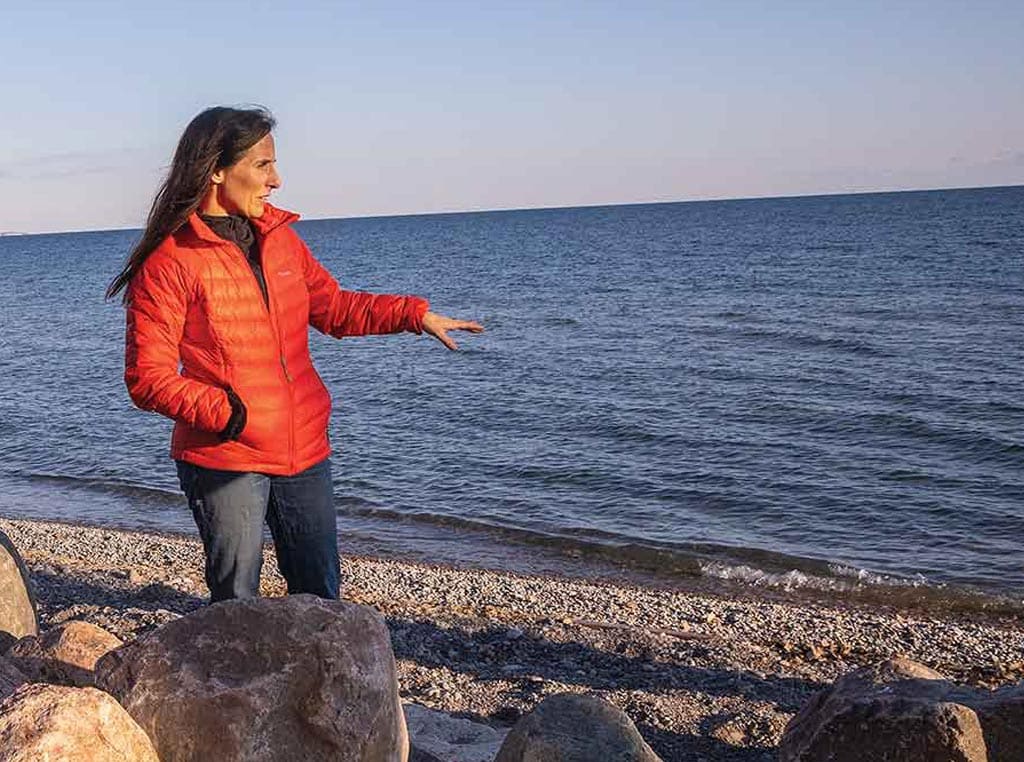 Sarah Delicate has been fighting to preserve her Lake Ontario waterfront home, family and community from high water since 2017.

Delicate called 911, but when the first fire truck arrived, she quickly found they had no idea what to do either. The 50 families in her community spent five weeks fighting for every sandbag they received. Thankfully, hundreds of volunteers donated thousands of manhours to deploy tens of thousands of heavy sandbags. They were a godsend for the many seniors living in these communities.

“Flooding is not like a fire,” Delicate says. “A fire is tragic, but it’s done in a day, and then it’s all about recovery. A flood goes on for weeks and weeks. Heart attacks, hernias and back surgeries are common. I lost 10 pounds and ended up with a blood infection and PTSD.”

Waterfront property owners and municipalities around the lakes universally want the water levels lowered. Lakes Michigan and Huron property owners petitioned the International Joint Commission (IJC), the agency responsible for overseeing the Great Lakes, to reverse two rivers that were diverted from Hudson Bay into Lake Superior in the 1940s to generate electricity back into their original course and increase the flow out of Lake Michigan into the Mississippi River through the Chicago Diversion. Both are out of the IJC’s hands, so neither offer short term solutions. Only Lake Ontario property owners can hope for a manmade reprieve.

Lake Ontario’s levels are tightly controlled by dams on the Saint Lawrence River. These are set according to guidelines outlined in the IJC’s Plan 2014. It’s mandated to balance the needs of upstream public and private waterfront property owners while preventing downstream flooding and facilitating shipping traffic through the Saint Lawrence Seaway.

Property owners in both Ontario and New York argued the plan was biased towards shipping and downstream interests and was keeping the lake unfairly high. New York launched a 50-million dollar lawsuit against the IJC to cover damages caused by the 2017 and 2019 floods. The IJC opened the dams’ spillways in the early months of 2020. In early January 2021, Lake Ontario’s levels are two inches above the long term average; the others remain at near record highs.

The options that property owners have depends on where they live. The University of Wisconsin has produced an online booklet, available by searching for, “Adapting to a Changing Coast for Property Owners,” that outlines possibilities for different coastal geographies.

“Shoreline projects can be costly so it’s completely understandable why people tend to put them off,” Cartwright says. “But, once part of your property has been lost to shoreline erosion in Ontario, it’s gone, you won’t be allowed to reclaim it. So, the earlier you start the planning process to protect your property the better.” 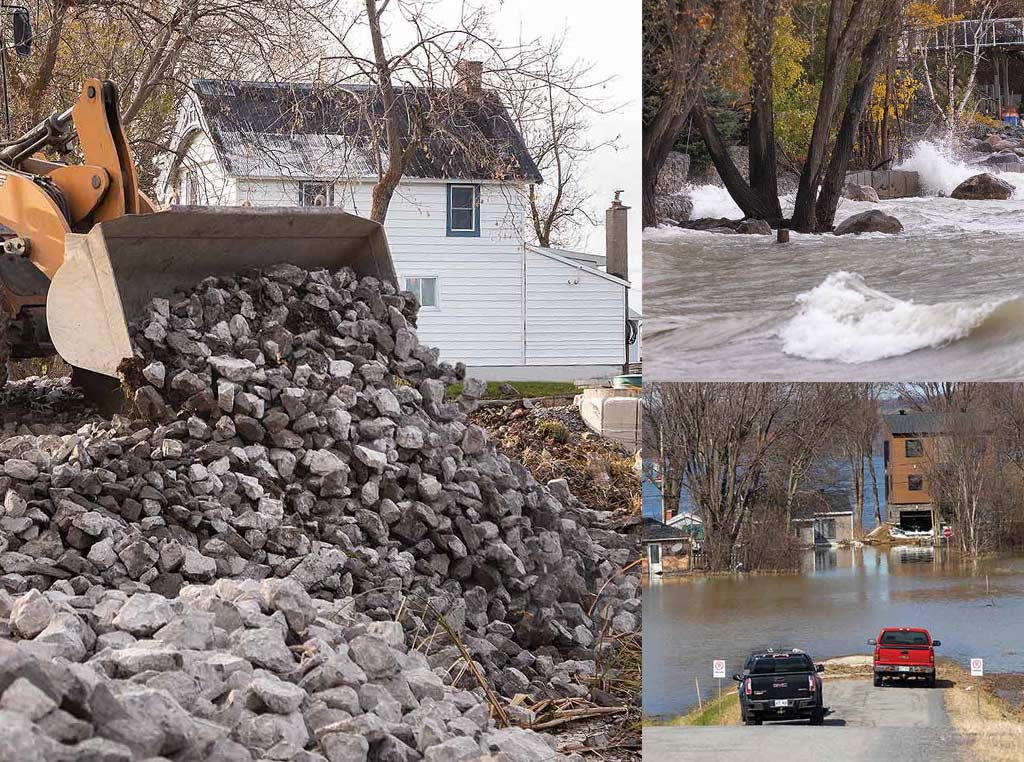 Great Lakes are full due to years of wet weather in the watershed. While high water levels in the lakes have always risen and fallen in a cycle, climate change is expected to increase the threat to people’s homes and cottages.