Through a process of regular communication and a vision of regenerative agriculture, the Bouska sisters have positioned their family farm in northeast Iowa to play a vital role for future generations in their rural community.

Sisters of the Soil

Farmers don’t talk much about money, or anything else ... and land transition takes talk. A lot of talk.

That’s a swatch of dialogue from Map of My Kingdom, a play about farmland transfer commissioned by Practical Farmers of Iowa (PFI) and written by Iowa Poet Laureate Mary Swander. The goal of the production is to break the taboo surrounding land succession, a particularly important topic in a state such as Iowa—where about 60% of the farmland is held by people over age 65.

The Bouska sisters have done a lot of talking—and continue to hold regular talks—about the future of their 450-acre family farm located in northeast Iowa near the town of Protivin. The four sisters also have done a lot of thinking—big thinking. They have set a course toward regenerative agriculture so that the very soil on their farm will be constantly renewed for generations to come.

Life imitates art. The Bouska sisters—Sally (Bouska) McCoy, Ann (Bouska) Novak, Peg Bouska, and Carol Bouska—left the farm to pursue other opportunities in life. Only Peg now lives in the state, a couple of hours away from the farm, in Iowa City.

Peg saw the first-ever performance of Map of My Kingdom when it came to nearby West Branch, Iowa. She saw it again when it was performed in a restored barn on the Blazek place, their second cousins’ farm, in the community where the sisters were raised.

“That barn is only 8 miles from our farm,” Peg says. “The play brought in a lot of local folks who knew our parents, Ed and Elmarie.” After the performance, several people spoke about why it is so important to discuss what’s going to happen with the farm. “It had a lot of impact with me,” Peg says. It was so moving that she identifies it as the galvanizing point from which the sisters began to take actions—the sisters often refer to them as intentional actions—to chart a course for the future of their family farm.

After much soul searching, the Bouska sisters decided that renewing the soil should receive high priority.

The sisters had inherited the farm, along with their older brother, Jack, in 2009. That’s when Ed, after spending his entire 91 years on the farm, passed away. Elmarie died on the farm in 2011.

The conservation ethic has always been strong on the Bouska farm, and the sisters decided to honor their brother with a pollinator planting. Even before Jack’s death, the family had discussed with their long-time tenant a plan to convert a 9-acre field adjacent to a wetland. It is now known as “Jack’s Field.” In 2017, the sisters added two more pollinator fields of 5 acres each, and named them for their parents.

The sisters then began the heavy plowing, facing the practical and emotional challenges surrounding farmland transition. They worked with Teresa Opheim, the force behind PFI’s Legacy Letter Project and current Climate Land Leaders’ project director. She provided a number of workbooks and other resources—many available by visiting practicalfarmers.org. The sisters met at the farm in 2016, mapping their goals for the farm’s future. Their father had emphasized the need for transition planning decades ago, with a goal of keeping family harmony. Not surprisingly, that showed up as one of the sisters’ priorities.

They also wanted the farm to continue to contribute to the rural community; their parents had been active volunteers for activities as varied as 4-H and community theater. The sisters agreed that they would take steps to avoid having their land swallowed up by farm consolidation.

They identified two other areas of high-level concern. The sisters agreed that the land should be used to produce safe, healthy food while improving soil, water quality, and biodiversity.

The Bouska sisters continue to refine their transition plan. They called in a facilitator to help work through some of the thorniest issues. “She encouraged us to think big,” Peg says. That led to their hiring of Ecological Design, a Minneapolis firm, to set the farm up for a regenerative future. They also are founding members of Climate Land Leaders, farmland owners committed to mitigating climate change with their land.

The Bouska sisters were recognized for their effort with Practical Farmers of Iowa’s 2020 Farmland Owner Legacy Award. “We meet more often than ever, take good notes, assign action steps,” Peg says. “It takes a lot of communication to keep on track.” 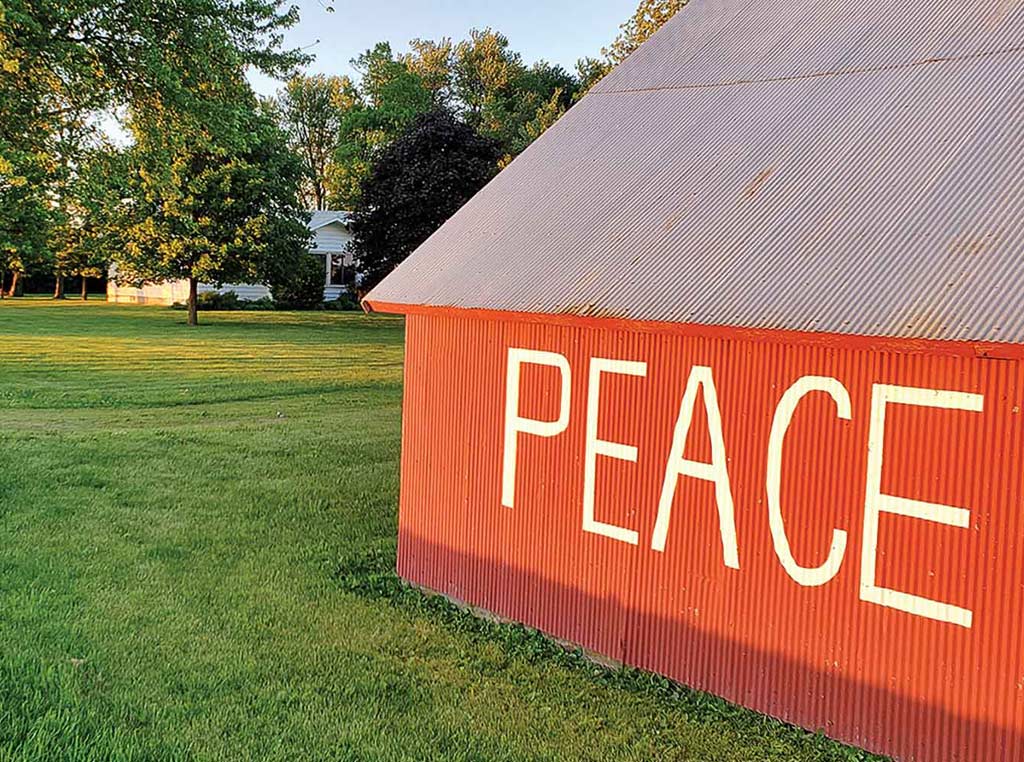 Their father, Ed, believed in harmony for the family as well as the world, and painted his message in big letters in 2003.