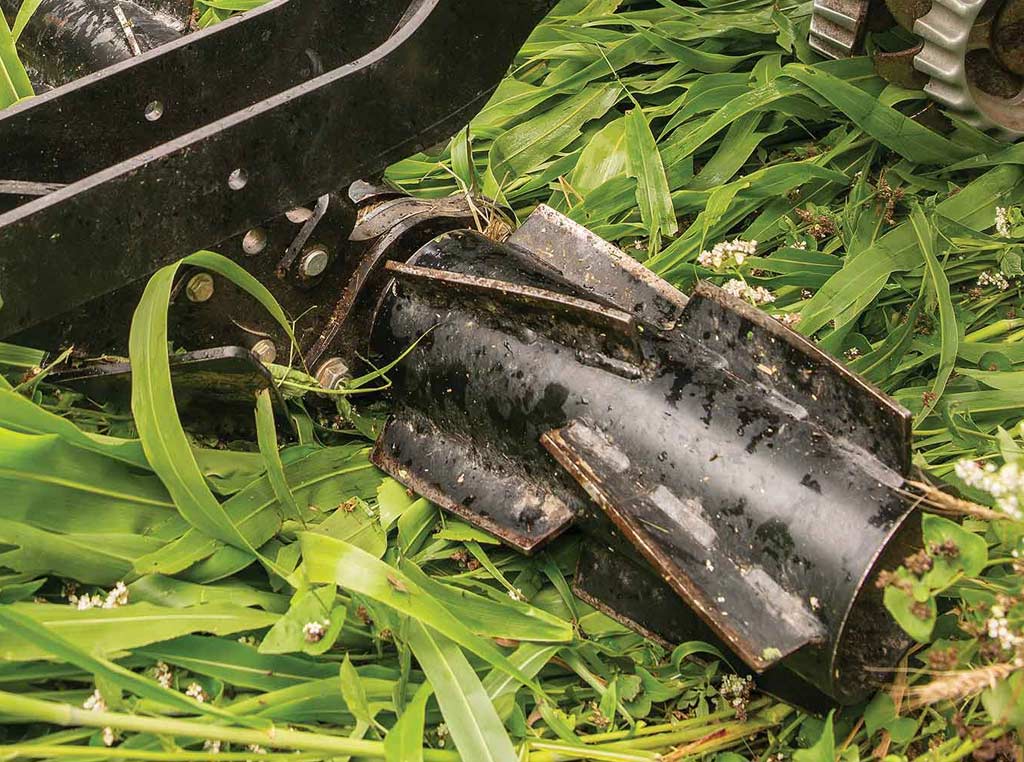 Dean Suderman had an economical, five-section, 41-foot crop roller built from the repurposed frame of a 16-row planter.

The recipe for the perfect seedbed has changed dramatically in recent times. It’s gone from a conventional finely ground, well blended puree to the crumbly cottage cheese texture of no-till. For some farmers, the perfect seedbed is now changing yet again—this time to a thick mat of a green and still growing cover crop. To continue the analogy, call it wedge salad. The salad-making utensil in the later case is the cover crop roller—perhaps the simplest yet most innovative new tool in regenerative agriculture. Its purpose is to lay down and crimp­— but not cut—a cover crop, causing it to die and become a thick mat of residue that can protect the soil surface and discourage weeds well into the growing season.

“Planting green and using a crop roller at or shortly after seeding corn or soybeans puts a grower on the elusive trail to the ‘Holy Grail’ of soil health,” says Keith Berns, co-owner of Green Cover Seeds, Bladen, Nebraska. “It maximizes cover cropping’s benefits of supplying nutrients, building soil organic matter, preventing erosion and reducing (or perhaps eliminating) herbicide use.”

It’s the later benefit that’s made cover crop rolling long popular among organic producers. Now, the persistent spread of herbicide resistant weeds has lead to that interest spilling over into conventional growers as well.

“Crop rolling has become more popular than I thought it would,” says sustainable ag consultant Steve Groff, who lays unofficial claim to building the first crop roller in the U.S. on his Pennsylvania farm. “They’ve really become popular in the last five years and now the latest trend is to put them on planters for a one-pass operation.”

Groff inspired the Rodale Institute to develop their now famous crop roller design—blue prints of which have been mailed to thousands of farmers and small town blacksmiths since 2008. That year the institute had ten of the rollers built by I & J Mfg. to test around the country. The idea was an immediate hit—the Pennsylvania company had orders for 50 units the very next year.

Ideas galore. The interest in cover crop rolling, or crimping, has continued to gain momentum as scores of equipment manufacturers and innovative farmers have found ways to mount chevron-bladed rollers on the front and rear of tractors, ahead of and behind planters, trailing on a tool bar and even running between established rows of corn and soybeans in cultivator fashion.

“I’ve probably seen 40 different styles of cover crop rollers in my travels,” says Groff. “It’s a simple idea, but there are a lot of ways to do it.”

Twin brothers Austin and Justin Petry of Centralia, Kansas, are among those who’ve gotten wrapped up in crop rolling. Soon after adopting cover cropping in 2013 they saw the need for a roller/crimper that would be big enough to quickly get over the 400 to 700 acres they needed to roll in the short period for optimal cover crop termination. And, the unit needed to be flexible to pivot over their terraced and rolling fields.

“We built one in 2017 from a 16-row John Deere planter bar,” says Austin. “It worked well and soon neighbors expressed an interest, so we started building similar retrofitted units. We charge $27,500 if we do the conversion or we supply a kit for farmers to redo their own planter bar for $15,000.”

The brothers got even more serious and started Progressive Ag Innovation (www.progressiveaginnovation.com) in 2020. They’ve expanded their product line to include stand alone rollers ranging from 6 feet to 42 feet and prices from $3,100 to $47,500. They’ve also outgrown their farm shop and purchased property for a true manufacturing plant. Hillsboro, Kansas, farmer Dean Suderman uses one of the Petrys’ planter-bar based units to roll cereal rye ahead of corn and soybeans. “Our goal is to have a thick stand of rye and treat it like a true crop so when we crimp it will stay down, die and form a thick mat for uniform weed control,” he says. Because he applies the bulk of his corn fertilizer in surface bands behind the planter, Suderman prefers to run the crop roller ahead of it. However, for soybeans he plans to experiment with a different approach.

“We want to try rolling the cover crop down after the soybeans are already up. Research shows this doesn’t damage the crop and it extends the time for the cover crop to benefit the soil and for its residue to hold off the weeds,” he says.

Rolling advice. Groff says the secret to successfully rolling cover crops begins with variety selection. “Cereal rye, triticale and hairy vetch can all be successfully terminated if they’re crimped at the proper stage of growth (pollination for the grasses and mid to late bloom for the vetch). Also, if you run the roller ahead of the planter the two passes must be in the same direction.”

Groff advises controlling expectations regarding weed control. “Unless they’re organic growers, most farmers still use burndown and residual herbicides, but they typically don’t need to use them more than once.”

Austin Petry says crop rolling has usually eliminated the need for a burndown and preemerge herbicide at planting. “We typically get about five weeks of weed control from the mat of crop residue, then we apply postemerge and residual herbicides to get through the rest of the season,” he says.