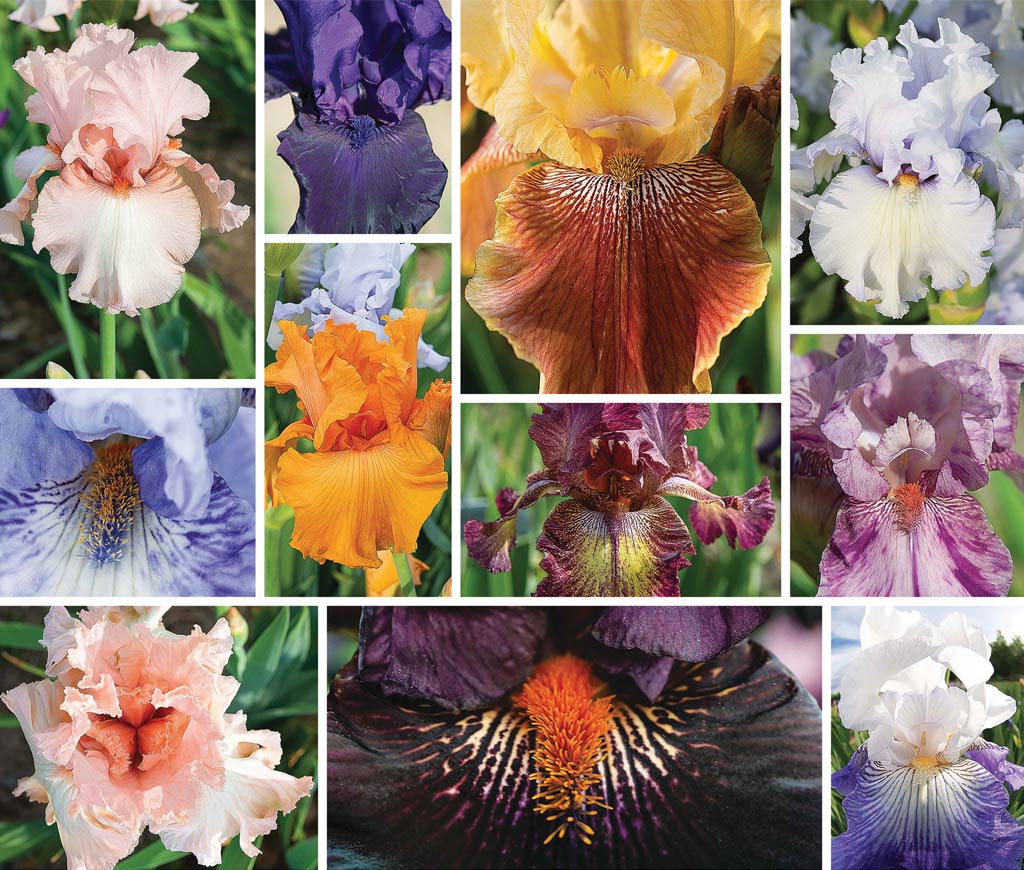 Standards, falls and beards feature amoena, plicata or ‘self’ color schemes with ruffles, signals, spoons and rims. The combinations of shape, texture, pattern and hue are nearly endless.

A passion-fueled collection destined to be shared.

Fair warning, you may want to keep 6 feet from this article, because the ‘Iris Virus’ is very catching. Muriel Zahm caught it herself some 55 years ago and is still spreading it to this day.

It starts with a bloom catching your eye. Or an impulse buy at a farmers’ market.

Soon, iris catalogs clog your mailbox and — like a gardener who mistakenly planted three zucchinis — you overwhelm friends, family and neighbors with masses of thinned plants.

“I wanted a pink iris,” Muriel says of the time before she contracted the lingering ailment.

A friend pointed her in the direction of a fledgling iris club. “They were the nicest people. They helped me get my pink iris, and then everybody wanted me to have a couple of their favorites. It snowballed from there.”

Muriel now has more than 1,000 iris varieties in her large garden on the outskirts of Laurel, Montana. People drive by the random riot of color and do a double take. Many stop, backing up to get a better look.

If they spot the little sign beckoning “Muriel’s Iris Garden, Welcome!” they might even pull through the gate to wander among the blooms.

A first visit is rarely a last. Admiration for the bevy of blooms has those who wandered in — this writer included as one of those double-takers, turned repeat customer — impulsively picking up order forms.

Flower names on little metal markers poking from clumps bristling with flower stalks are jotted down, erased, replaced, and added again. The selection is truly overwhelming. But Muriel is there to help.

From 9 a.m. to 7 p.m. April through June, visitors will find Muriel ambling about fussing with her collection.

One hand full of weeds, the other full of wilted blossoms, Muriel never tires of talking irises. Or simply watching them. “You see a flower starting to open, then walk by 5 minutes later and it’s bloomed,” she marvels. “Often I just stand there and watch as they do.”

Some have been a part of her garden so long they’re like children. Which is why she knows an astounding number of them by name. And oh the names! 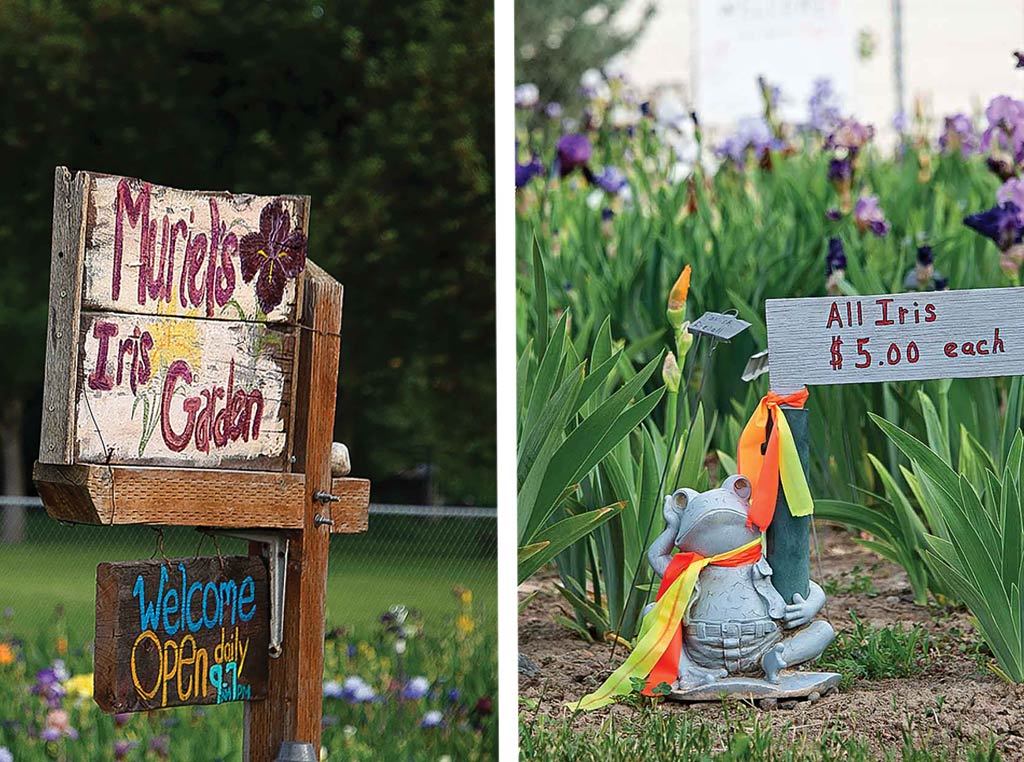 When her hobby grew beyond her flower beds, Zahm started selling her irises to the public from her large garden.

Color combos. For Muriel, it’s not the names, but the variety of color schemes, patterns and textures that determine if a new iris variety joins her hoard.

Iris flowers are made up of a standard (three upturned petals), falls (the lower three petals) and a beard (hair-like structures at the top of the falls). Each can be different colors or have a different feature.

An iris with ‘self’ color pattern has standards, falls and beards all the same hue. Amoena-patterned irises have white or light colored standards with dark falls. Plicata have a light background with flecks of color.

“The standard is often plain, but then they have these little stitches of color on the falls. It makes them very pretty,” Muriel says. [Can you spot one of each]

“The old ones were floppy, very wimpy,” she says. “Now they breed for flowers with a firmer texture that hold up in the wind and rain. One thing I’ll say about the older varieties, though, is they’re tough! They take care of themselves.” 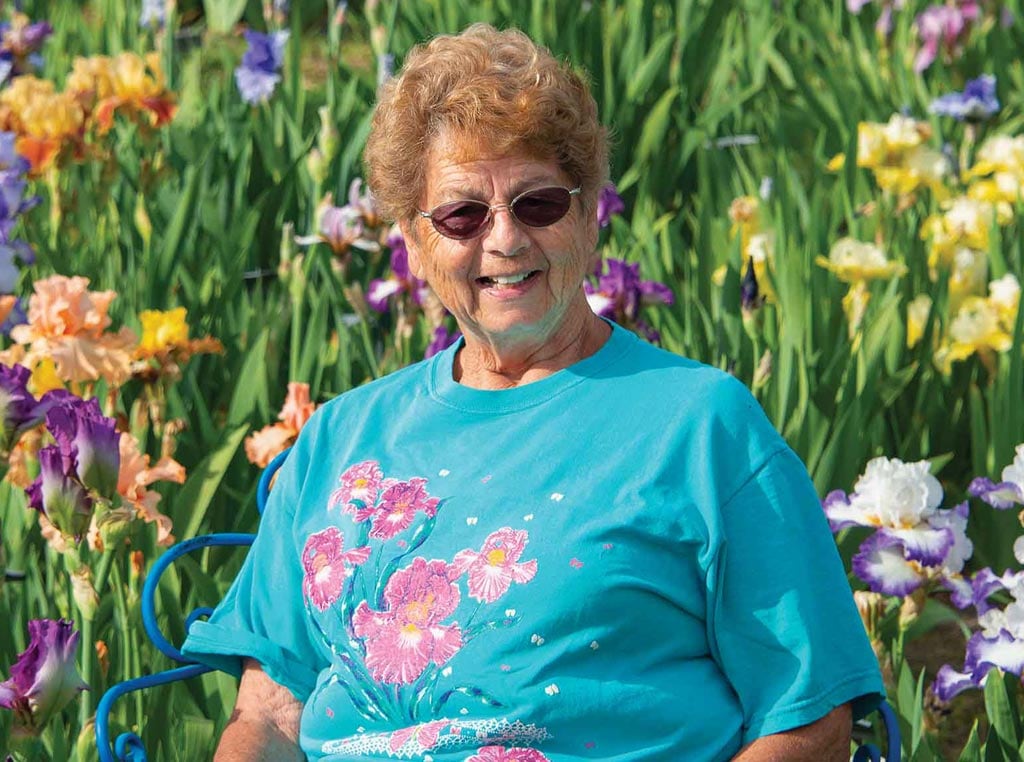 Muriel Zahm may have as many iris-themed t-shirts as she does irises. She wears her uniform of sorts while she tends her irises, visits with customers and preps iris starts for sale as she does here with her daughter, Karla Robert.

Irises are dug early on July mornings, then she gathers with her daughters and granddaughter in the shade to clean, label, clip and dry the new starts ordered by customers months earlier.

Easy keepers. Part of what makes irises addictive, especially to new gardeners, is how easily they grow and multiply. A touch of fertilizer in the spring, divide in summer, a little water here and there and they’re happy to go on and on.

Once established, they continuously send out rhizomes sprouting new shoots easily transplanted or shared. When Muriel moved, she dug up decades worth of irises and moved them to the new place, too.

Being a grass, they tolerate broad-leaf herbicides, so it’s not uncommon to find them in road ditches and otherwise unkempt locations—likely the doing of a local iris or garden club.

The prolific producers give iris clubs and fervent growers such as Muriel plenty of plants for such projects or to sell. Each year finds Muriel at farmers’ markets selling her starts. The whole endeavor has become a bit of a family project.

“My daughters, Laura, Tammy and Karla, have helped me for years,” she says.

Their biggest work push is in July when they divide plants and fill orders.

Like any harvest, it draws the family together — including Muriel’s granddaughter, Jaunice Terrell, who was home on break from college.

In the early mornings they dig rhizomes from several varieties. As temperatures rise, they move the work to the shade, forming an efficient assembly line.

Laura cuts rhizomes into individual plants. Tammy washes. Jaunice trims the foliage (known as the fan) to about 10 inches and passes them to Karla who records the variety name on the leaves with a Sharpie. Muriel oversees the whole operation clipboard in hand.

Once all varieties are collected, each order is tucked in a paper bag for pickup by buyers.

One of those buyers is reliably Delane H. Langton. He bought his first irises from Muriel at a farmers’ market in the late ‘90s.

He recalled sitting with his grandmother as she tended her irises and giving the flowers to his teachers as year-end gifts.

The nostalgic purchase was his downfall. He quickly contracted the ‘Iris Virus’ he laughs.

“Over the years I would buy grocery bags full of irises from the stand. Then I started going to Muriel’s garden to buy directly,” the now retired body shop owner says. “I’ve kept doing that all these years and go back for more every year. There’s no known cure.”

He caught it bad. So bad he now has an iris garden boasting of 5,000 varieties and has started to cross his own. Though not all customers go to such extremes, Muriel has surely seeded a love for the flowers in many, many gardeners over the 45 years she’s opened her garden to the public.

“A daycare visited and a little boy stared and stared at a bloom before exclaiming, ‘Now that’s black!’” she recalls. “He came back later with his grandmother and took her straight to the plant. I guess it made quite the impression on him.”

Who knows, that little boy may right this moment be eagerly watching black-tipped buds, waiting for the first blooms of his extensive ebony-hued collection to unfurl.