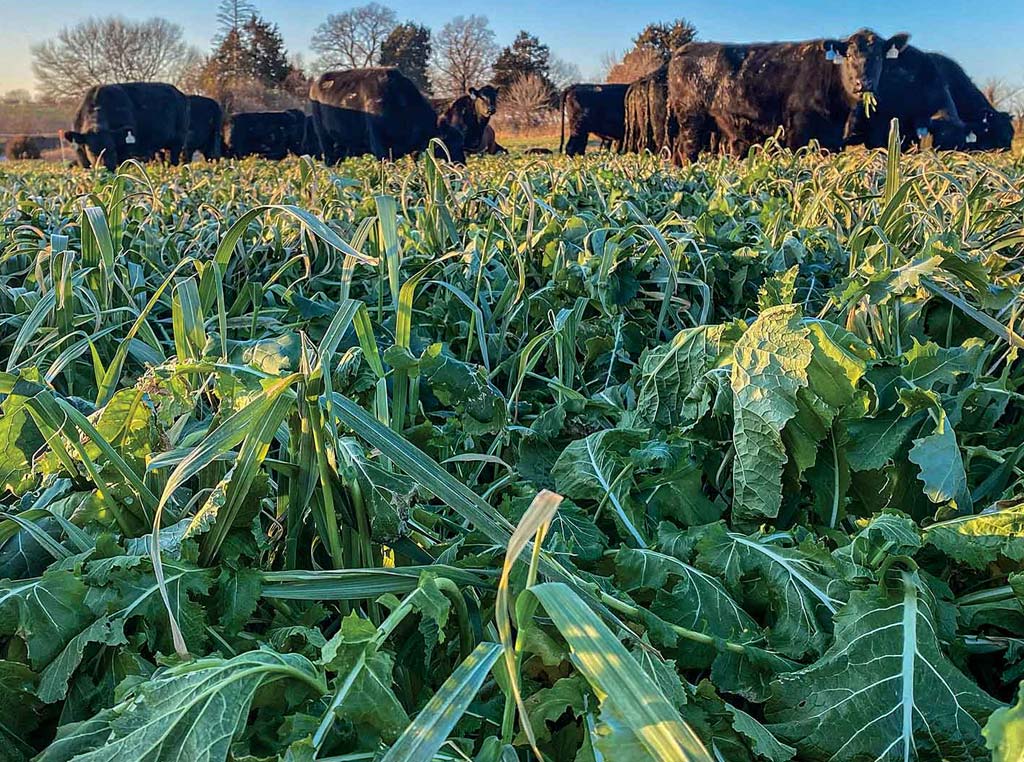 Blends of brassica and grass cover crops can extend grazing well into fall.

Just another day. Another week. Most people would love a bit more time to do whatever it is that needs doing. It’s the same when it comes to grazing livestock, especially when the alternative—feeding hay—drives up expenses.

About a decade ago, animal science professor John Jennings led a team of University of Arkansas researchers to develop a strategy of improving existing forage resources, stockpiling forage by letting it grow into the fall and grazing rather than haying it, and overseeding complementary species to widen the grazing window. They called it the Arkansas 300 Days Grazing System—which is about three months longer than usual—and found it saved cattle producers in the state as much as $50 per animal unit.

The Arkansas 300 Days Grazing System is detailed in bulletin FSA 3139, which walks through the logic of inventorying the forage base, improving pastures, adding species, scheduling grazing, and monitoring the results.

Inspired by the approach, seed company Barenbrug USA curated a collection of its genetics—from soft-leafed tall fescue to teff grass, legumes, and brassicas—that could help livestock producers put the Arkansas strategy to work nationwide. Barenbrug calls it the Pinpoint System, pinpointing gaps in the grazing calendar and filling them with forage.

The approach works in the bermudagrass and bahiagrass warm-season systems of the South. Interseeding clovers and brassicas extends grazing into the cool weeks of fall and winter. Crabgrass fields provide forage when hot summers stress perennial pastures. 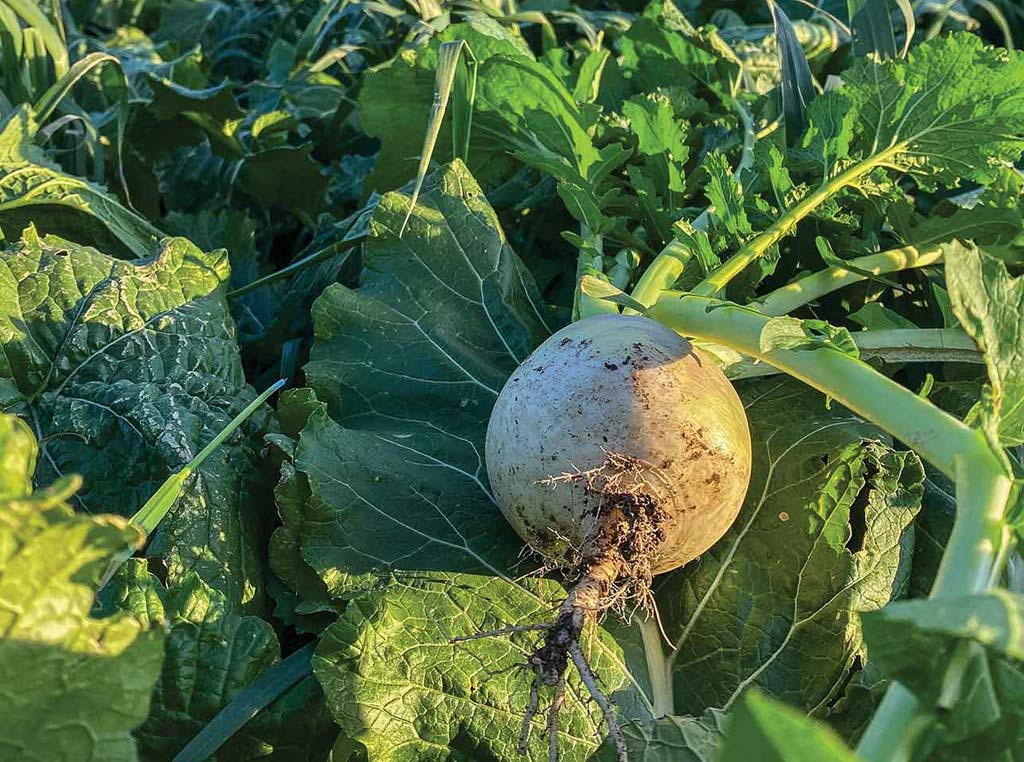 Barkant turnip was bred for top growth as well as bulbs.

Longer grazing window. One of those producers is Cole Vander Linden, who runs close to 400 cow/calf pairs near Otley, Iowa, and raises hay, corn, beans, and silage. He says his Pinpoint program saves him $2 per cow per day in hay cost and lengthens his grazing window by 30 to 45 days in the fall.

Vander Linden’s goal is to hold off on haying his cattle until at least mid-January. He adds that stockpiled fescue pastures could be grazed all the way into February if the winter is mild and the snow isn’t too deep. He strip grazes to minimize waste.

“Most of my cattle are trained to hot wires, so every couple of days we move the fence back 20 feet,” he says. “It’s a little time consuming, but at the end of the day, if you can save a week or two out of that field instead of feeding hay bales, it’s worth it.”

Vander Linden uses mixes of oats and brassicas as both cover crops and forage. Summer-seeded blends after small grains give pastures a chance to rest and stockpile before he turns cattle back out on them in the fall. Cover crop mixes planted after corn harvest provide spring forage.

The key, Vander Linden says, is giving cover crops the attention they deserve.

“I look at that as a crop of its own, just as I look at corn or hay or beans,” he says. “So I don’t go and pick all my corn and then come back with the planter. If the weather’s fit and the dirt’s right, cover crops are going in the ground. I might even park the combine for a couple of days to get [cover crops] planted.”

Vander Linden invests in about 50 pounds of nitrogen for his cover crops. He adds that he can then limit his corn fertilizer to 100 pounds of sidedressed N and still harvest crops like his 245-bushel average in 2020. “The last few years, I probably had some of the best corn crops I’ve ever had following my cover crops with the cattle running on it,” he says.

“We like to mix turnips with oats or ryegrass or something like that to help slow the rumen down,” he notes.

As a cow/calf producer himself, Wilson experiments with forage crops, interseeding strategies, and species blends on his farm near Monroe, Iowa.

“There’s lots of different options for different people in different scenarios, which really makes it neat,” he says. “It’s not one-size-fits-all.”

Grazing can begin on tops 60 days after planting, or farmers can wait 75 to 80 days until bulbs grow. Cole Vander Linden saves $2 per head for every day he can keep cattle grazing. Photos by Luke Wilson.