For the Love of Meat

As he carves paper-thin slices of prosciutto from a pig’s leg that has aged in his kitchen/butcher space/YouTube studio for two years, Sheard digs deep into the links between people and their livestock, and between us and our cultural and culinary history.

“It’s prudent to be able to create your own food, to go raise your own pig, kill it yourself and preserve its flesh,” he says. “This is good thrift. But it’s also super delicious. It’s such a full, good way to live. It’s not just survival—it’s abundant living, while at the same time, it’s very humble. I don’t know what a word would be for it.”

Sheard pauses, searching countless words he read on his way to earning a master’s degree in English Renaissance literature. He decides to coin a new one.

Turning surviving into thriving starts in the pen, Sheard says.

“It’s an absolute certainty that the most essential two ingredients really are the husbandry and the harvest,” he explains. “If those things are done well, then that meat is literally effortlessly delicious. So it means in the kitchen, your job is actually easy—you don’t have to go through a lot to make a really delicious meal.”

Flavor discovery. Sheard says he powered through his academic studies on a diet of “chips and salsa and Trader Joe’s wine.” Then he and his wife Lauren moved to tiny Vashon Island, Washington, and he took a job with a small, local farm/restaurant. There he encountered flavors that changed his outlook.

“What have I been missing my whole life that I thought food had to be this complex thing where we tease flavor out of bland ingredients?” Sheard recalls asking himself after tasting bacon that he describes as “a revelation.”

Suddenly, his palate and his study of Renaissance culture collided.

“I was fascinated by the fact that the best things were made by peasants, and the things that taste the best utilize the simplest of methods,” he notes. “Like the best prosciutto in the world is still made the same way in Spain, and it’s just two ingredients: pork and salt. That’s it.”

Representing the farm at farmers’ markets around Seattle, Sheard got engaged in teaching shoppers how to cook various cuts of meat. He found himself butchering those cuts himself when the 2008 recession forced the farm to trim staff and rely on Sheard to fill the meat-cutting slot.

Sheard tapped his grad school research skills, studying old European butchery techniques as well as classic preparations like curing. By night, he’d butcher meat and by day, he’d walk consumers through how to cook it.

His cooking coaching and butchery lectures started to merge.

“You don’t need one recipe for every cut,” Sheard says. “You need three techniques: braising, pan frying, and roasting. That’s it. You’re good to go. And if you can discern by looking at a carcass which parts to braise, pan fry, or roast, then you know how to butcher the animal.”

Brandon Sheard carves paper-thin slices of prosciutto—European-style, dry-cured ham—that he’s hung in his Washington State butchering room for two years. Made for centuries from just pork and salt, he says it’s an example of the exquisite flavor that a well-raised, well-butchered animal can yield with just minimal effort in the kitchen.

Mission. Sheard has made it his mission to help homesteaders and small-scale farmers discover the combination of thrift and abundance that comes with using every pound of the animals they raise. It’s a learning process that extends from understanding how to select a breed (“Gloucester Old Spot are so calm; they’re the easiest pig to kill”) to how to care for them (“fencing is just a negotiation between you and an animal”) to how to prepare head cheese and kidney pie.

“People who are raising their own meat, which is who I work for, don’t want to throw anything away,” Sheard says. “They get it. It’s small-scale. The margins are super-tight and they have affection for their livestock and they don’t want to see it wasted. At the same time, though, it is a burden if you don’t know what to do with pig heads.”

Sheard and his family favor Gloucester Old Spot pigs for their calm temperaments and delicious meat.

Classes. Thousands of people have watched Sheard slaughter pigs and sheep in his educational videos on YouTube and farmsteadmeatsmith.com. It’s quickly apparent that he will wait a long, long time to pull the trigger. That’s because Sheard considers his .22 magnum a culinary instrument, every bit as important—and as carefully selected—as his carving knives to delivering good meat.

The Sheards also host groups of eight on their busy homestead for three-day, hands-on classes that start with slaughtering pigs and cover butchery, curing, and cooking. Students—typically homestead-scale farmers—have traveled from as far as Austria and Brazil to participate.

Sheard also hits the road to bring classes to farms across the U.S., teaching fellow homesteaders to kill and butcher pigs and lambs.

He also offers monthly and annual Meatsmith memberships, which unlock a trove of e-books, podcasts, and archived videos on every aspect of livestock, butchery, and meat, as well as a members-only forum that connects more than 400 meat lovers around the world. Through it all, Sheard preaches his love of animals, meat, and...thrival.

“I wish there was another metric than just ‘hanging weight,’” he muses. He ponders a way to sum up the contributions of taste and thrift to the good life. “Culinary value.” 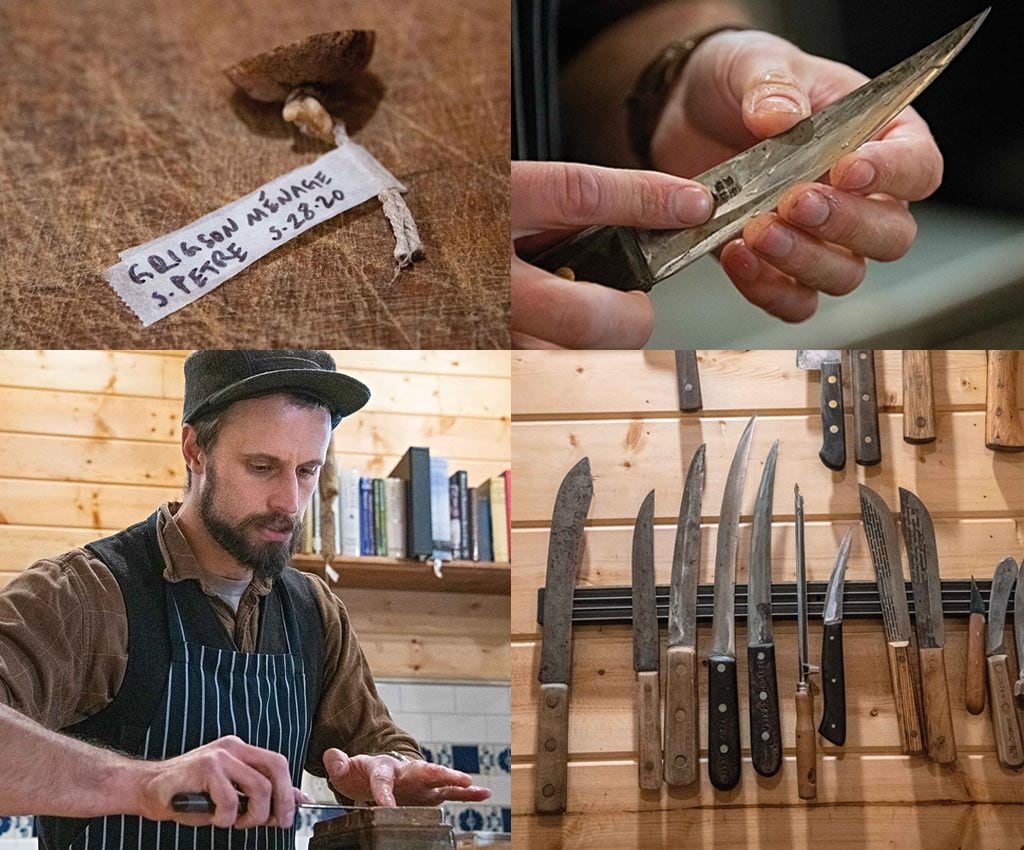 A fine blade complements a practiced hand. Every knife plays a unique role; so does Sheard’s Savage .22 magnum. Sheard focuses as he sharpens a knife. Sheard continually experiments with curing, cooking, and recipes.