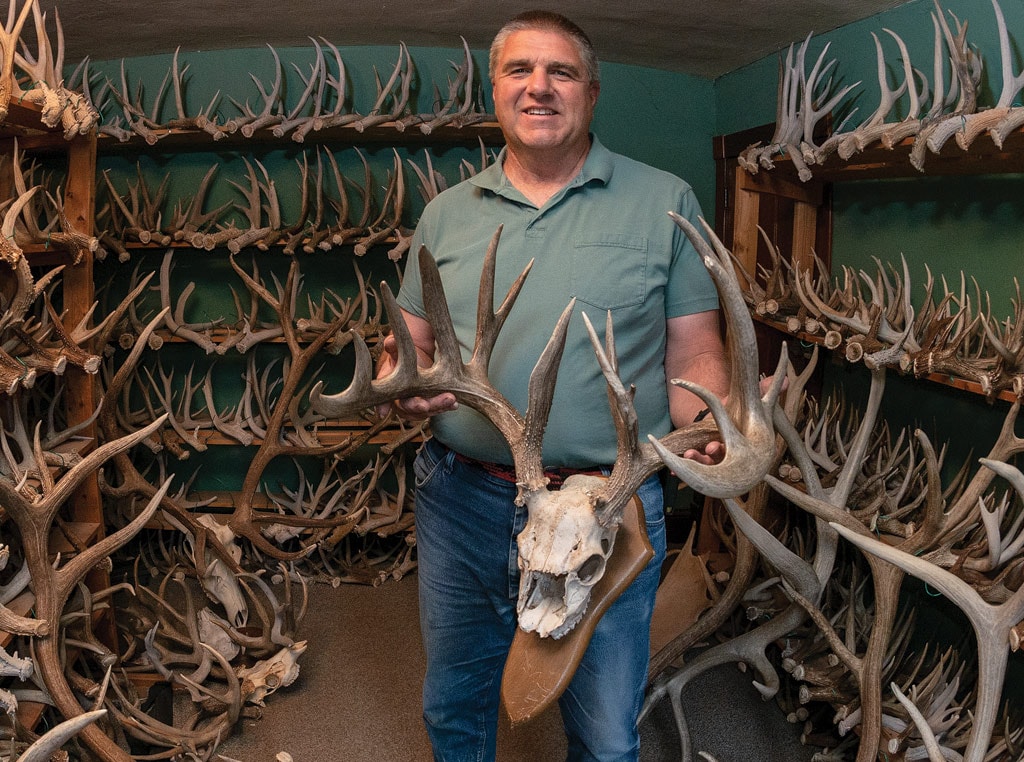 The hunt is always on for this antler aficionado.

A collection of every antler produced by this deer was completed when Hayes’ neighbor gifted him the one set that was missing. Hayes is grateful to neighbors who let him pursue his hobby on their land

Wildlife biologists could likely learn a thing or two from eastern Montana rancher, Art Hayes. Obsessed after an epic find in his youth, Hayes has trekked easily thousands of miles on foot in search of shed antlers over the years. Along those miles he’s collected trophies, oddities, fascinating observations and enough stories to regale for hours any lucky enough to visit the crowded room housing his favorite 600 of the thousands of sheds gathered over the decades.

He was just 12 years old when he stumbled upon the monster 209-inch Boone and Crockett score whitetail skull pictured while begrudgingly checking fence in a steep draw. At the time he notes he wasn’t particularly athletic or likely to earn recognition in other places. “All of a sudden I had done something nobody else had done. I was pretty excited and started actively looking for antlers,” he says.

At first it was just fun and good exercise. He started seriously searching for sheds around 1979, trudging more than 20 miles per day on his family ranch, neighbors’ property and public lands. Today, shed hunting is a popular activity with public land opening days generating a Black Friday sale-type fervor as collectors flock to the hills. But when Hayes started, sheds were mostly gathered as a novelty and tossed in flowerbeds to keep the dogs from digging.

“The first few years I picked up everything. Nobody was hunting them then, so it was a slow day if I picked up 20. There were days I’d find 100,” he says.Packing around all those antlers quickly lost its appeal, so Hayes started just keeping the big ones. He walks by 20 or 30 antlers before he finds one suited for his collection. In 1994 he started cataloging finds, recording where they were found, measurements and taking pictures. Since then he’s averaged about 300 antlers per year, and countless stories. 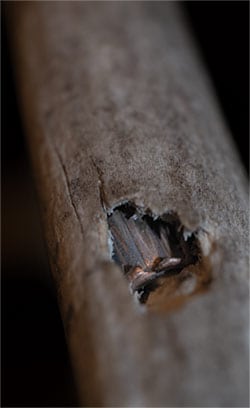 A once-in-a-lifetime find, an antler with a bullet lodged in it. The bullet had to ricochet before entering the horn to be in that position and the reduced velocity is the only reason it didn’t travel

A Keen Eye. While antler bearing critters from moose to mule deer shed antlers in winter, Hayes has his eye on the target year round. On many occasions he’s observed deer he later collected sheds from, even collecting several years of a deer’s sheds.

He has four years of sheds from a whitetail near his home that grew a normal antler on one side and a tall, atypical antler on the other. Those that collect sheds but don’t work the land likely wouldn’t know why the antler grew that way. But Hayes did.

“The deer was crippled. The freaky antler grew on the opposite side of his body from the injury that made him lame,” Hayes says. One of many fascinating biological observations he’s made over the years.

Injury creating a unique antler makes it easy for even the untrained eye to see that a deer has a general set pattern of growth it maintains from year to year. Hayes has a critical eye — and a practically photographic memory of antlers — for finding those patterns and matching them to deer he’s seen or collected sheds from. This has made for fascinating discoveries, such as sheds found decades apart, sheds from deer harvested long ago and having a good idea where a deer was taken — or perhaps poached.

Some are educated guesses. “I found a broken 2-point that matches up nicely with an antler I found in 1983. I’m not 100% certain it’s from the same deer, but they keep the same pattern and it really hooks up at the end. I found them in the same area,” Hayes says. (See page 48 to form your own opinion.) He found the deer itself mounted on the wall of a local print shop. The once tiny hooked 2 point grew to be a monster muley with a 37-inch spread.

If you think that sounds like a Sherlock Holmes -worthy story, here’s a tale that spans decades. “I found this shed in 1988 and this one in 1991,” Hayes says holding up two clearly matched antlers ferreted seemingly at random (literally from different parts of the room) from row upon row of the antler-lined shelves of his collection. Neat enough.

“And here’s a picture my neighbor gave me of the same buck he says was taken by a hunter from Harrisburg, Pennsylvania, in 1961. This antler laid out there 30 years until I found it.”

The antlers were found among cedar trees. The match to the 30-year-old antler was found in the open, but had severely degraded as compared to the one Hayes kept that was found in the brush. And there’s more.

“In 2003 I saw a deer with the same antler type on the same hill,” Hayes says. He assumes it’s a many-generations-removed continuation of the same line. “It might be the doe’s line, though, as the doe has a lot to do with the shape of the antler and the size.”

Another buck he followed for years, collecting increasingly large and unique sheds. A friend who had watched the deer with him determined it was finally time to hunt the deer. After surprising him bow hunting on October 8, the deer ran over the hill never to be seen again...alive.

Ten years later, a forest service employee related the tale of a large buck taken in the area in the 1990s and delivered a picture a year later. It was the same deer.

“A guy out of Billings shot him 5 miles from where we found his sheds and had seen him. I tracked the guy down and showed him the sheds,” Hayes says. A Billings Gazette article and photo gave a general region where a particularly large deer was harvested. The photo caught Hayes’ eye. “I could tell you right where he got it or really close because here’s the shed I found from that deer in 1981,” he says. The shed location indicated the deer may have been poached. A theory gaining likelihood when the hunter was eventually charged with poaching, just not for that deer.

No doubt on the origin of this atypical shed.

Hayes’ brother once saw a whitetail with an antler hanging. Knowing it would soon drop, Hayes hunted it down. He discovered the antler wasn’t shed, but ripped from the head complete with a bit of skull.

They didn’t suspect the deer would last the winter, but he did. “From then on he grew a normal antler on one side and a deformed antler on the damaged side. A broad base grew from the scarred bone,” Hayes says, who found more of the deer’s sheds in subsequent years. 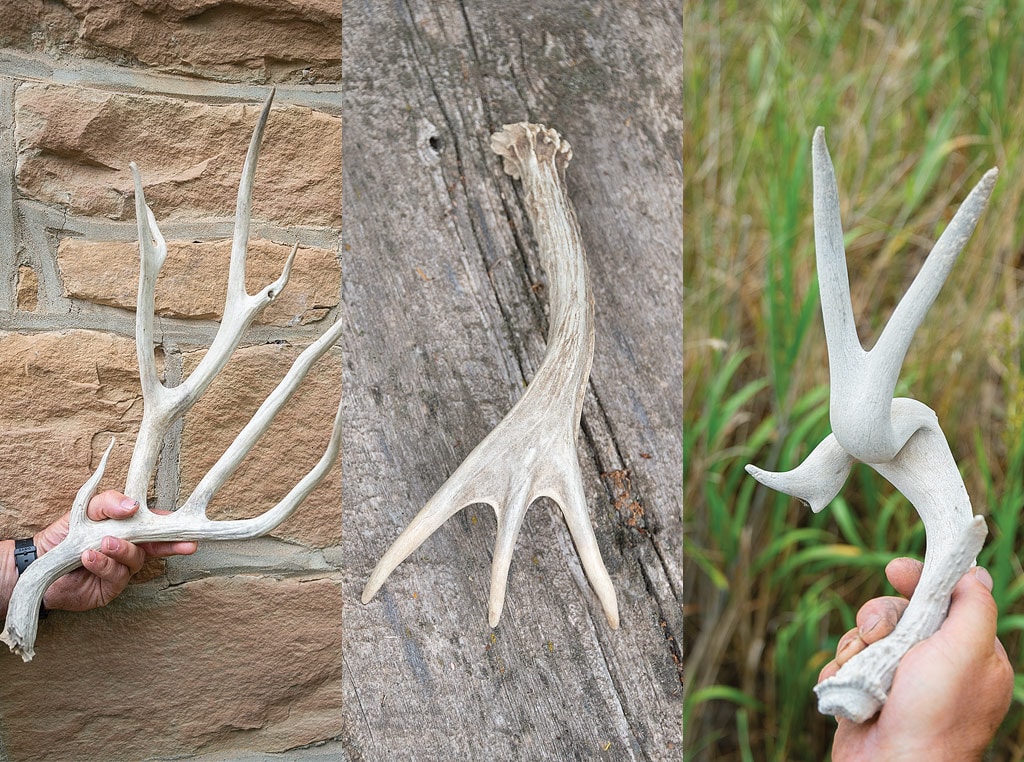 An amazing find. Handed a typical mule deer shed, it came as a surprise when Hayes declared it his most unique find. Further inspection revealed a bullet lodged in the antler’s beam.

“I was walking a ridge in Idaho in some really steep country. I came upon a rock slide clearing and saw a pair of nice antlers. When I picked up the second, I was like, ‘Huh, it’s got a hole in it.’ Then I saw there was a bullet in the hole,” Hayes recalls. The odds of the find are incredible.

“Based on how it’s in there, it was tumbling when it hit and was already mushroomed out. Whoever shot it hit a tree or something else before it hit the antler as the deer was running away,” Hayes surmises.

It’ll be a tough find to beat. But that won’t stop him from trying. Hayes has hunted sheds in New Mexico, Arizona, Utah, Colorado, Idaho, Montana, North Dakota and Ohio. He’s found thousands of white tail and mule deer sheds, elk antlers and two moose antlers. He has massive atypicals and the slender antlers of a very old deer (page 45 bottom left), perfect back scratchers and tiny spikes. But one shed eludes him.

“I’ve never found a Boone and Crockett 90-inch typical set of muley antlers,” Hayes says. The measurement is a total of four circumferences, beam length and tine length. “I’ve only seen two in my life shot around here.”

Fresh interest. While Hayes has a collection overflowing to every barn, shed and spare space, others are just getting started. About a 2-hour drive from Hayes’ place lives another ranch kid with one eye constantly trained on the ground.

Now 17-year-old Robert Phipps has picked up sheds while gathering cattle on his family’s ranch since he was able to get off and back on his horse without help.

“I usually find at least one every time we ride, but can find up to eight,” he says. He picks up every one he sees and often sidetracks to check shed “honeypots” he’s discovered.

For Phipps, each shed is money in the bank, literally. He collects sheds all year and sells them to an antler buyer. Antlers are sorted by grade and range from $2 per pound for very old antlers to around $15 per pound for fresh sheds. Large sets can fetch hundreds. But already Phipps has a few antlers he won’t part with.

“We had a deer around for years we called Captain Hook because of the big hook he had on his antler,” Phipps says. “My dad has one of his sheds and my uncle eventually harvested him when he got really old.”

Sounds like the start of a room full of antlers and a lifetime of stories. ‡ 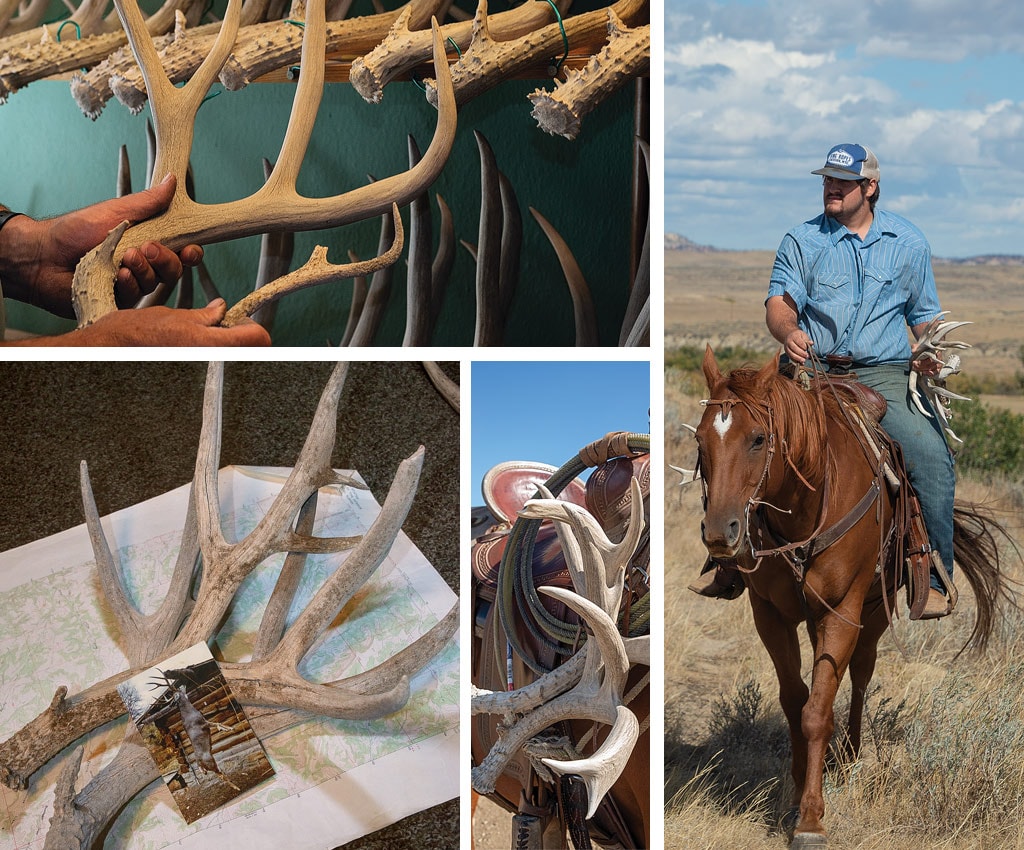 Sheds found 17 years apart but likely from the same deer. Robert Phipps picks up sheds while working on his family ranch. 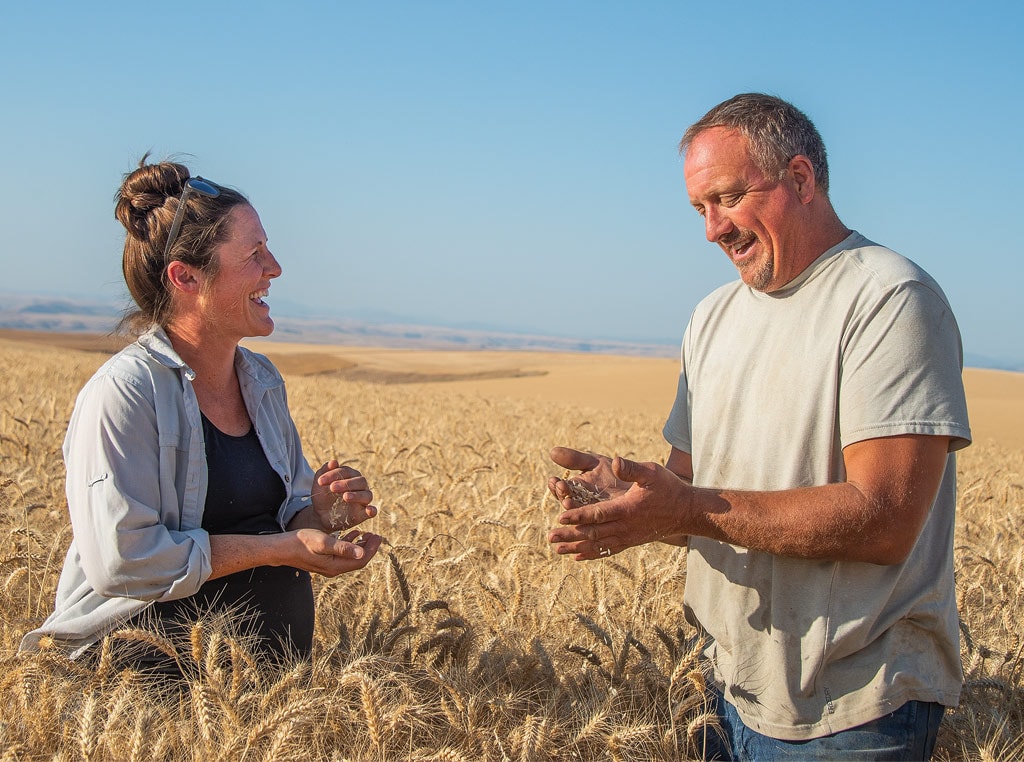 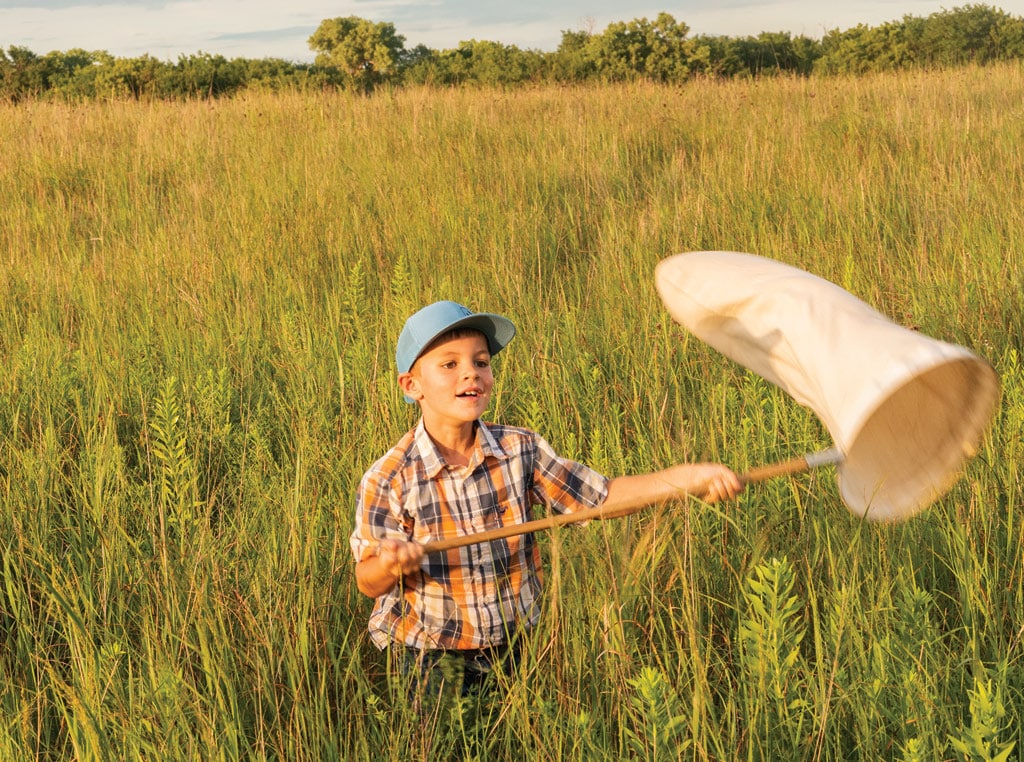