When Chase Goodrich and his sister, Danielle, came back to the farm in 2008, they became the family’s third generation to manage this dairy operation near Salisbury, Vermont. But Grandpa Goodrich could never have predicted the direction that this younger generation would take.

The Goodrich family not only milks cows and makes hay these days, it also is taking on a role as a producer of “gas natural”—renewable natural gas (RNG) that fulfills a growing demand from carbon-sensitive customers.

Chase insists that this is nothing more than the next logical step for the family dairy farm: Cows produce manure, manure produces methane, and methane can be scrubbed and injected into the nation’s pipeline as RNG.

“We think the digester tells a really good story for the farm,” he says. “We not only care about our animals and our land, but we also care about the community—protecting water quality and respecting our neighbors’ way of life. Each generational transition on our farm has had its challenges, and we think the digester helps us face the environmental and financial challenges that we face in the dairy market today.”

Partnership plan. Goodrich is talking about the farm’s foray into anaerobic digestion, a cooperative effort involving a number of partnering firms. Vanguard Renewables is the developer, owner, and operator of the digester. Another partner, Vermont Gas, is heading up construction of a pipeline that will connect this site to the company’s distribution network. And nearby Middlebury College has agreed to purchase the bulk of the RNG as part of its ambitious plan to use 100% renewable energy to power the campus by 2028.

Vermont is serious about protecting the environment. In addition to strict water-quality rules for farms, the state also passed a recent law that bans food waste from entering landfills. The setup on the Goodrich farm allows for co-digestion; 100 tons of cow manure will feed the digester daily, along with 180 tons of food waste.

“This unique partnership will provide a source of sustainable energy while recycling tons of food waste that previously went to landfills,” says John Hanselman, Vanguard’s chief executive. He points out that the dairy receives separated solids for bedding, liquid digestate that is used to replace commercial fertilizer, and an annual lease payment. Hanselman expects the first gas from the digester to enter the pipeline system in early 2021. 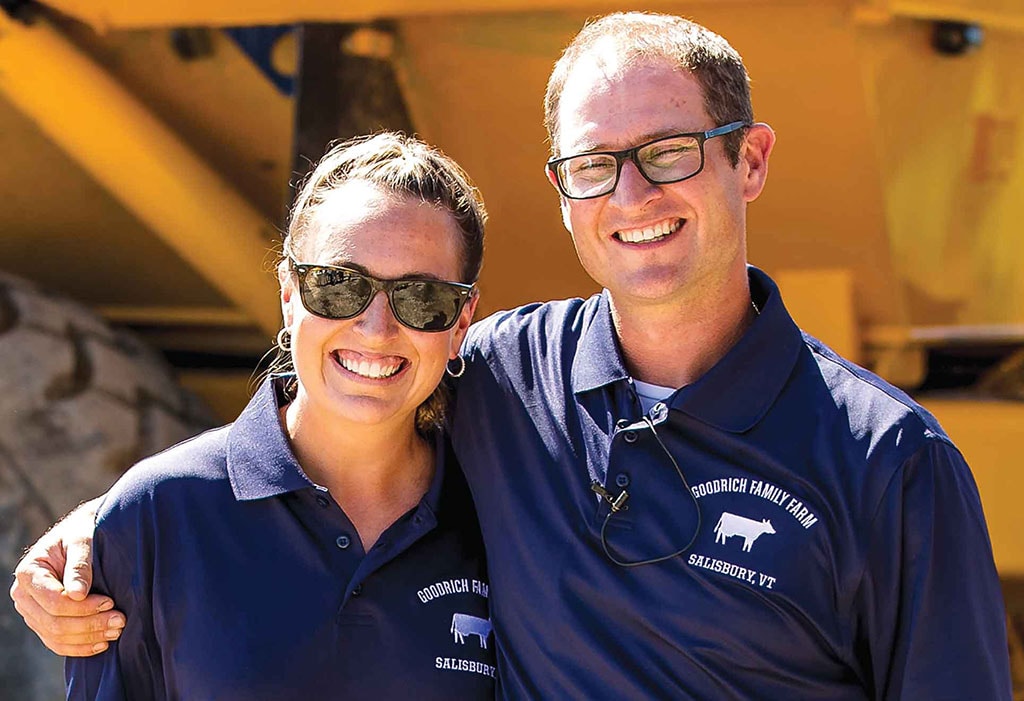 Danielle Goodrich Gingras and Chase Goodrich are the third generation to operate the family dairy farm.

As reported in previous editions of The Furrow, the concept of “gas natural” is catching fire with U.S. livestock growers. Smithfield Foods, a $15-billion global food company and the nation’s largest pork producer, has installed infrastructure to capture methane on a number of its northern Missouri pig farms. Through its Monarch Energy joint venture with Roeslein Alternative Energy, pipeline-quality RNG is produced and enters the American Natural Resources pipeline.

Digester gap. Compared with Europe, the U.S. is facing a “digester gap.” Biogas is not a new concept—for decades, a few livestock operations have captured methane to power generator sets that provide power for the farm and some additional electricity that can be sold back to the grid. But there’s a new groundswell of interest that began in Europe, where methane instead is captured and refined into RNG.

Looking to become more energy independent, European countries began to subsidize digester projects for farms and commercial waste streams. Those efforts have paid off, as Europe now has more than 17,000 biogas plants. Denmark expects to fully provide its needs with RNG by 2040.

A recent study produced by the U.S. Environmental Protection Agency, USDA, and the Department of Energy suggested that the U.S. could support 13,000 biogas digesters, enough to power 3 million homes. Redirecting food waste into digesters could provide enough energy to offset 6 billion gallons of diesel fuel.

The rush to catch up is underway—from California dairy farms to poultry and pork operations along the eastern seaboard. A recent state law passed in North Carolina requires utilities to source at least 0.2% of their electricity from poultry and swine manure; Duke Energy has signed an agreement to displace fossil natural gas with RNG to generate 11,000 megawatt-hours of electricity in two of its plants. 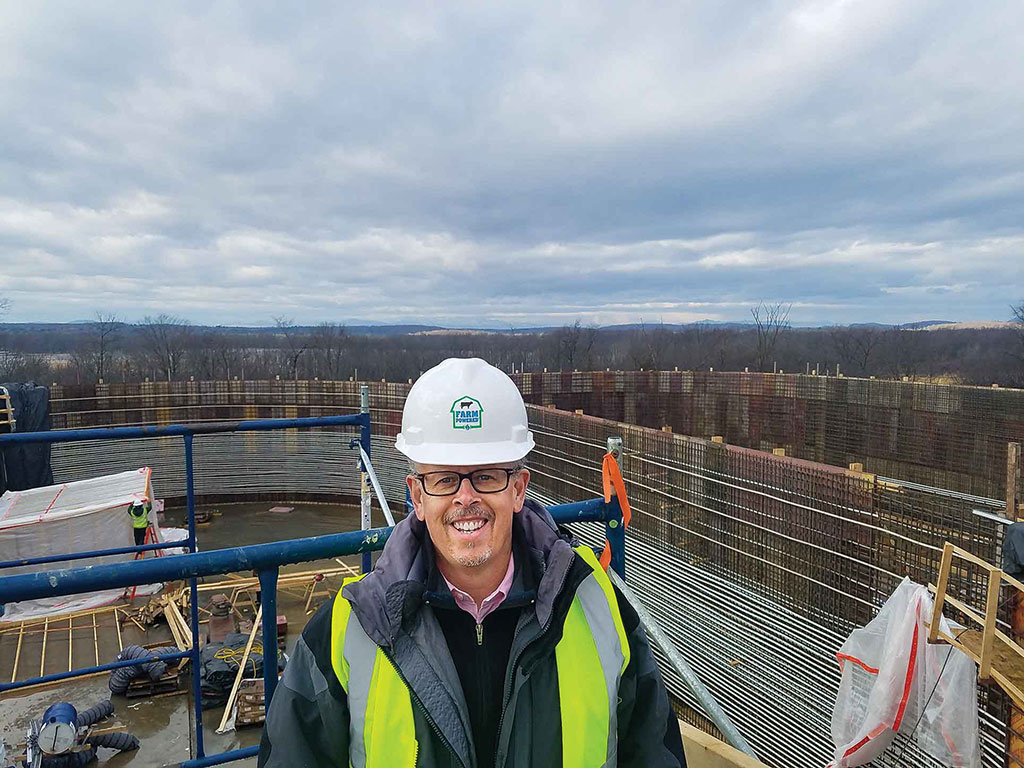 Driving the favorable economics of RNG is the California market. The state’s Low-Carbon Fuel Standard provides incentives for fuel producers to increase the amount of renewable fuels they sell. “California has developed a program that endows a gas molecule with environmental credentials,” says Vanguard’s Hanselman. “Now, if you are able to identify your molecules as having originated on the farm, you can sell that gas for something on the order of 3-to-5 times the price of commodity gas.”

California dreaming. He also points out that California’s energy incentives provided an explosion of interest in solar projects to provide renewable electricity. The bounty paid for renewable electricity sources was phased down in subsequent years. “If you got into that market early, you did well,” Hanselman observes. “I think we are seeing a similar situation today with RNG. There is a lot of interest in developing digester projects, and that will lead to competition and innovation.” The Goodrich digester is Vanguard’s sixth project, developing both co-digestion and manure-only systems. 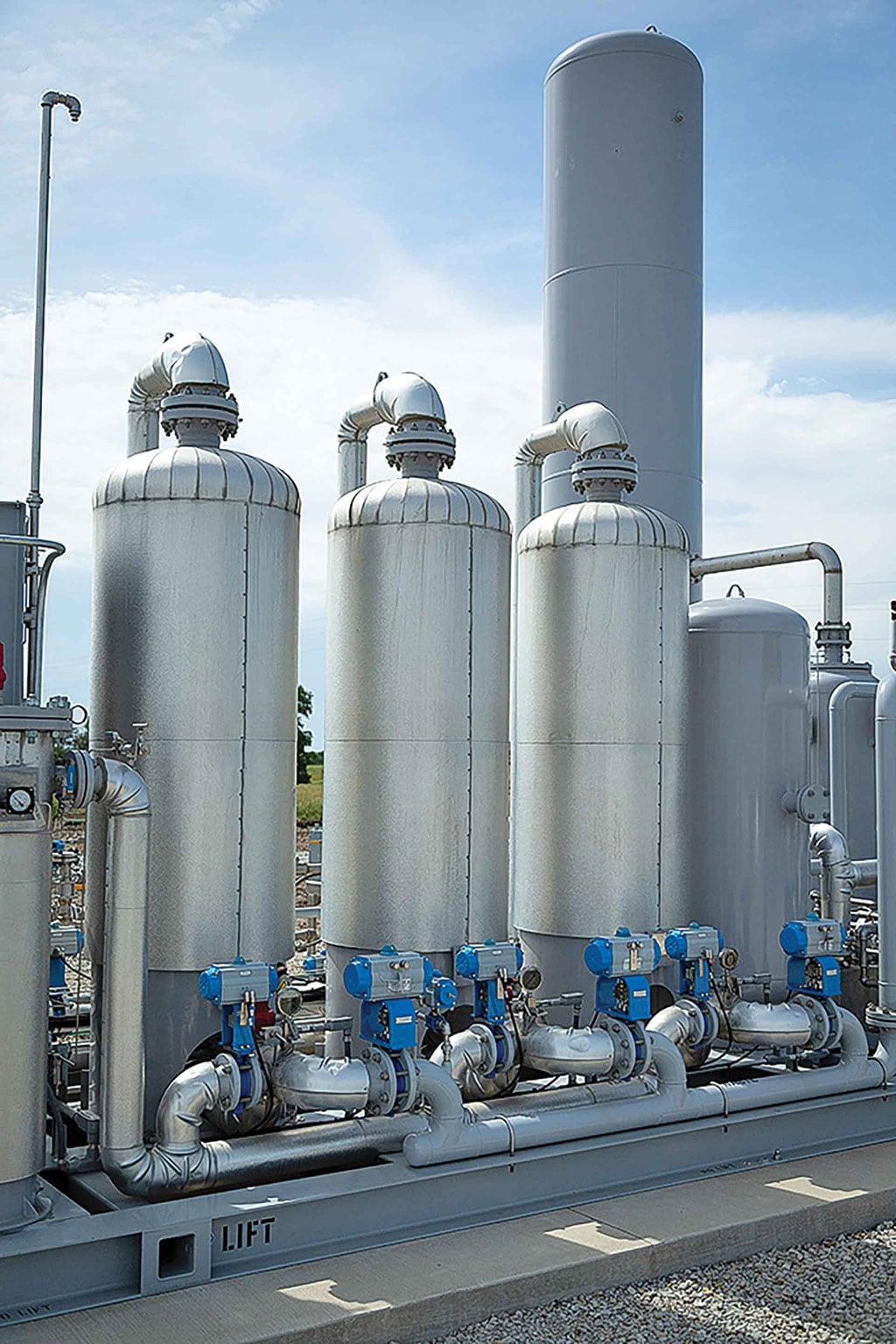 An anaerobic digester system under construction at the Goodrich dairy farm near Salisbury, Vermont.

Vanguard has a strategic partnership (though non-exclusive) with Dairy Farmers of America to help bring digesters to dairy farms across the country, and has branched into digesters for poultry as well. “I’m convinced that our approach, providing professional management of a network of systems on multiple farms, will prove to be a winning formula,” Hanselman says.

For Chase Goodrich, time will tell if the digester project was the right strategic move. Signs already are encouraging. The solids recovery system is in place, and the dairy cows like the bedding it creates. The project also allows the farm to consolidate its milking operation into one central facility, improving that efficiency. “Things are different than they were in Grandfather’s day,” he observes. “We felt this was an exciting opportunity.”