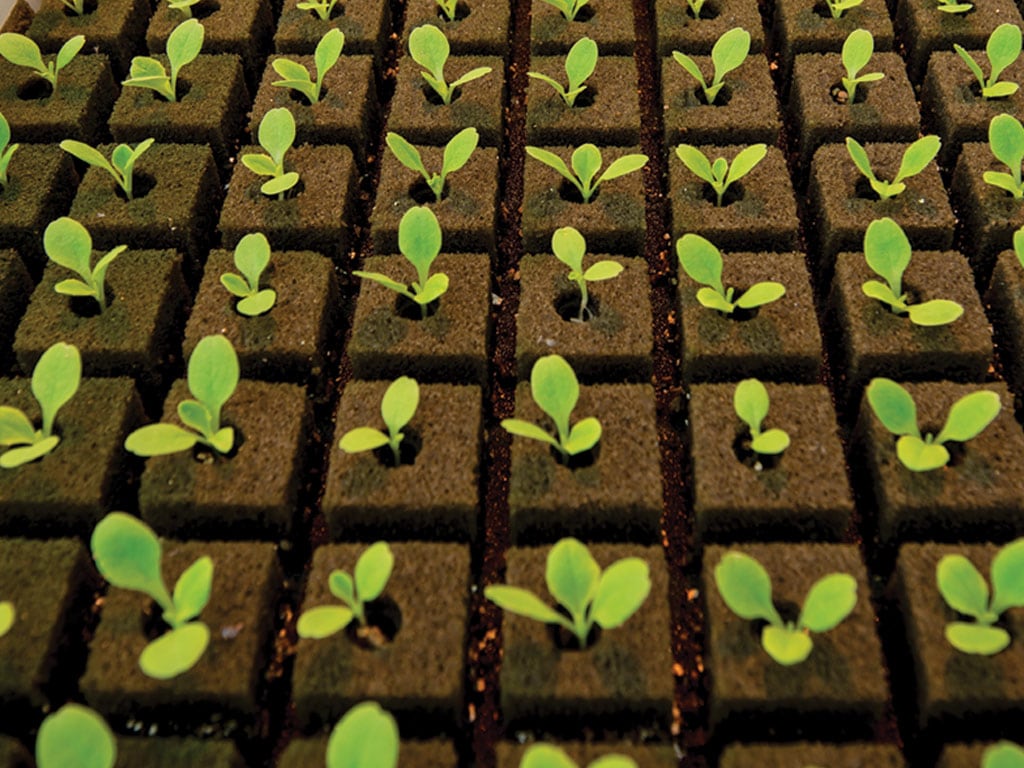 Growing greens is the catalyst as a community strives for inclusion.

In dreams begins responsibility.” The Irish philosopher William Butler Yeats made that observation about poetry back in the early 20th century, but he could have been describing Lettuce Dream.

That’s the name of a hydroponic farming operation in Maryville, Mo. It is a 6,700 square foot state-of-the-art greenhouse with the capacity to produce 113,256 heads of fresh greens annually.

Lettuce Dream (on the web at lettucedream.org) is the fulfillment of a promise that Diane Francis made to a dying friend.

Both women were raising children with disabilities, and they dreamed of a day when stepping-stones could be placed to aid those children on their path after high school, allowing them to become proud and productive young adults.

Francis believed that an agricultural setting would provide those stepping-stone opportunities. She shared this dream, and the Maryville community was soon sold on the idea. A prime piece of land was donated, and by late 2016, the first crop of lettuce was growing in the glowing greenhouse at the east edge of town.

Connections. “We are providing progressive job training for young people with cognitive or developmental disabilities,” says Francis, who serves as president of the company’s board of directors. “We are a social enterprise.”

And that social enterprise is built on making connections within the community to accomplish the heavy lifting for both the farming tasks and job training. The Lettuce Dream staff works with individuals with disabilities who join the workforce as interns. Lettuce Dream also reaches out to the nearby campus of Northwest Missouri State University to offer opportunities for students to work as job coaches. And there are opportunities for retired people from the senior citizen community to volunteer as well.

Keeping all this activity on track is Kim Cohen, Lettuce Dream’s coordinator of volunteers. “It’s interesting to watch the dynamics of these different groups of people as they learn to work together as a team,” she says. “They mesh quickly when they set out to accomplish the tasks they face.”

She points out that Lettuce Dream recently hosted a conference on the importance of disability inclusion in the workplace. Randy Lewis, who installed a model of inclusion employment during his tenure as a senior vice president of Walgreens, made an observation that echoed Cohen’s experience with Lettuce Dream. “The biggest impediment to hiring people with disabilities is fear,” he told the potential employers. “Your fear.”

Charlie Clodfelter serves as director of Lettuce Dream, and he sees those fears melt away when interns and volunteers handle the day-to-day operations of the farm. “We see that these young people with disabilities are quite capable,” he says. “Our interns are involved in every single aspect of growing these crops. In fact, I sometimes think our interns know our processes better than anyone.”

The idea, however, is not to train the interns to be greenhouse workers. “We are helping them build their skillsets and their resumes,” Clodfelter says. “We want to build their confidence so they can join the workplace in our community.” About two dozen interns have done just that.

There’s also an element of social change in the work at Lettuce Dream. Clodfelter thinks the interactions with the students from NWMSU could provide a future payoff. “When our students become business leaders, we hope they lead the change to employing people with disabilities,” he says. “Their experience here should give them the confidence to have a more inclusive labor force.”

Stay the course. The COVID-19 situation put a new set of challenges in front of Lettuce Dream; being oriented to food service, the company’s key markets took a hit. Lettuce Dream depends on three main sources of funding: training, donations, and produce sales. All declined due to COVID-19.

But if you think a global pandemic is going to prevent Lettuce Dream from fulfilling its destiny, you don’t know Diane Francis. “We have made adjustments,” she says, including a new emphasis on retail packaging.

She’s also convinced that she can rely on her friend in heaven for divine intervention. “We take our responsibility seriously,” Francis says. “We will stay the course.”

Charlie Clodfelter is director of Lettuce Dream, handling the production and marketing of about 700 pounds per week of fresh greens. Kim Cohen coordinates efforts of a diverse group of people.