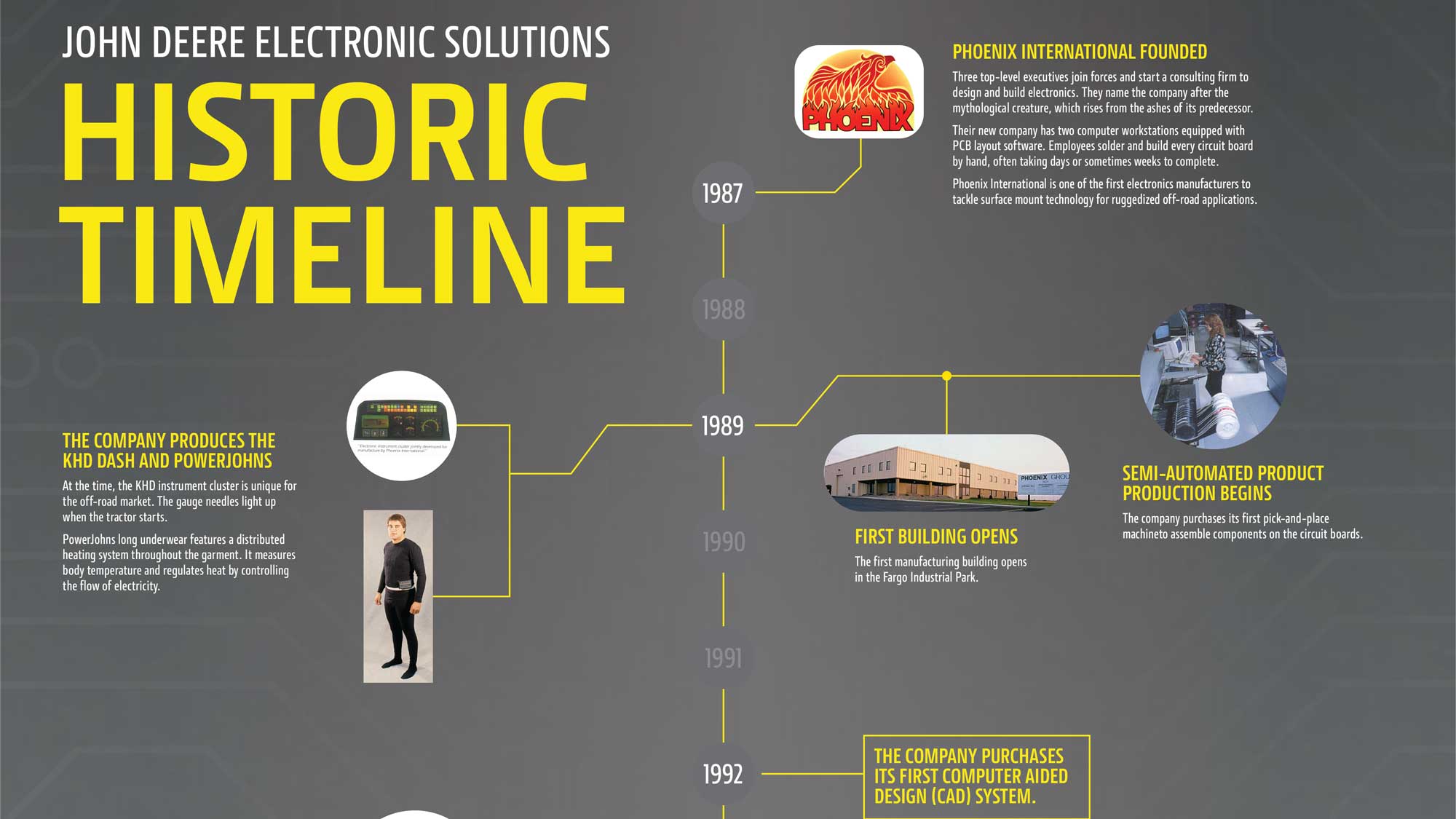 Fargo, ND. – 2017 marks 30 years of innovation and exceptional engineering for John Deere Electronics. What began as a small electronics consulting firm is now a leader in engineering, manufacturing, and procurement of parts for an extended electronics lifecycle.

In 1987, three gentlemen left their current positions and embraced a new part of the agriculture and heavy equipment industry. These visionaries understood the challenges that certain markets faced and saw the potential in electronics to become a differentiator in off-road applications. In a small office space above a downtown Fargo, ND restaurant, the men at Phoenix International began to build a legacy. With a station to solder and build circuit boards by hand, a shared computer on a roll-away cart, and only a handful of employees, Phoenix International produced electronic solutions for locomotives, exercise equipment and even heated long underwear.

The company became the very first manufacturer to use surface mount technology, incorporate illuminated dash gauge clusters, and bring other leading edge innovations to the off-road application market. The team thrived as they encountered and overcame new challenges and that innovative spirit was just the beginning. Hard work paid off and soon enough, other large heavy equipment companies were turning to Phoenix International for their electronic needs.

As Phoenix grew, they began to catch the eye of a particular industry leader. When John Deere Power Systems was in the market for a supplier to design their new diesel engine controllers, Phoenix was a strong contender. Although Phoenix was awarded the design project, an audit revealed that their manufacturing processes were lacking according to John Deere's quality requirements.

Determined to win the engine control business, process improvement plans were set in place to address every concern on the manufacturing line. Improvements over the next year were so significant that by 1995 John Deere awarded Phoenix the manufacturing business for engine controls, solidifying the start of a major partnership. Understanding the potential of electronics in heavy equipment and an opportunity to provide more value to their customers, John Deere acquired full ownership of Phoenix International in 1999, creating what we know today as John Deere Electronics (JDE).

Feet on the ground, Eyes on the Future

With the same ambition and drive as the entrepreneurs at Phoenix had from the beginning, JDE strives to manufacture high quality, rugged electronic components that thrive in the most extreme environments. Alongside strong commitments to agriculture and construction, JDE also works to enhance innovation, expertise and competitiveness by providing electronics for original equipment manufacturers worldwide. All in an effort to increase productivity and efficiency, and while supporting the need to feed and clothe people around the world.