HEIRS’ PROPERTY: HOW THE LEAP COALITION IS HELPING FARMERS UNLOCK VALUE IN THEIR LAND

Just over a century ago, Black farmers owned over 16 million acres of land in the U.S. Today, that number has fallen to 4.7 million acres.

There are numerous reasons for this decline including discriminatory practices that impacted how many Black farmers acquired and transferred their farm land—a form of land ownership called "heirs' property."

"Many Black landowners avoided formal estate planning and passed property without a will," Collis Jones, vice president U.S. Policy & Strategy, explained. "Without a will, a landowner's property would simply pass to heirs. Over generations, however, heirs' property created both increasingly fractional ownership as well as clouded title."

Without clear and documented title, Black farmers are unable to use their property as collateral to secure loans or credit to further develop their businesses. These farmers are also often precluded from government programs and other forms of emergency or disaster relief. By some estimates, upwards of 60 percent of Black farmers currently operate on heirs' property.

To eliminate the barriers created by heirs' property, John Deere recently joined with the National Black Growers Council (NBGC) and the Thurgood Marshall College Fund (TMCF), to form a new coalition entitled LEAP (Legislation, Education, Advocacy, and Production Systems). One of the coalition's goals will be to provide legal resources to help farmers gain clear title to their land.

The creation of LEAP is a result of John Deere's participation on a Business Roundtable (BRT) special committee on racial equity and justice. The group's finance subcommittee, which Chairman and CEO John C. May is part of, focuses on providing access to capital in minority communities and other factors contributing to persistent income disparity.

"Securing land title for Black farmers will not only unlock inherent economic value for them, but it will also allow us to help eliminate longstanding systemic barriers to land improvement and wealth building that has constrained many diverse farmers across the United States," said Denver Caldwell, director Aftermarket & Customer Support, Region 4.

John Deere is committed to ensuring Black farmers have access to the vital resources they need to leap forward and sustain their farms for generations to come. 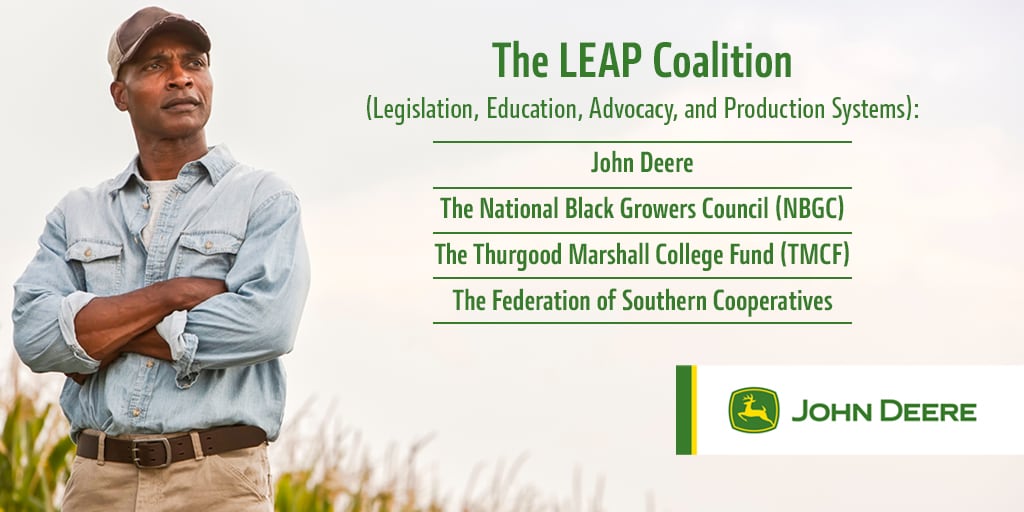