A special night shows America’s love for baseball – and corn 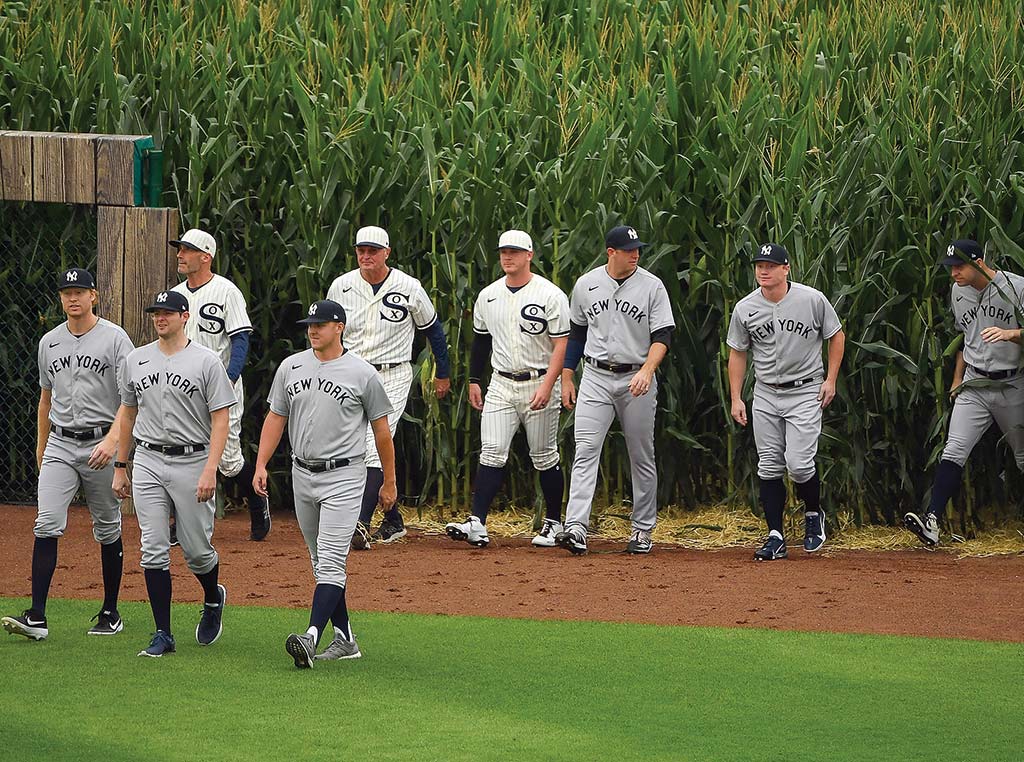 Recreating a scene from the classic 1989 baseball movie Field of Dreams, players from the New York Yankees and the Chicago White Sox emerge from an adjacent cornfield. Surrounded by 159 acres of corn, the diamond built by major league baseball mirrors the dimensions of Old Comiskey Park in Chicago, where Shoeless Joe Jackson, a key figure in the plot of the movie, played professional baseball. (Game photos courtesy of MLB.)

At the end of the evening on August 12, 2021, after the last of the crowd had shuffled away from this professional baseball diamond cut into a field of corn, there was only one question left to answer: Is this heaven?

No, it was Iowa. It just seemed like heaven to the nation’s corn growers, watching the New York Yankees and the Chicago White Sox cavort in the corn as Major League Baseball (MLB) brought The Show to the Field of Dreams movie site in northeast Iowa.

By the time White Sox hero Tim Anderson had won the game with a dramatic, walk-off (or should we say stalk-off) home run into the cornfield in the bottom of the ninth, America had rekindled its love for the national pastime. And America’s crop took center stage for three-and-a-half hours of love.

Celebrate corn. Kevin Ross is an Iowa corn grower who attended the historic game. It was an event he had been anticipating for two years.

Ross is a farmer-leader, having recently completed a stint as president of the National Corn Growers Association. He recalls that, in August 2019, he was scrolling through his Twitter feed when he saw a notice that MLB was coming to Iowa for the first time ever, planning to play a game on a newly constructed baseball field adjacent to the original Field of Dreams movie site near Dyersville, Iowa.

In that classic 1989 baseball film, an Iowa farmer listens to a mysterious voice that tells him to destroy a few acres of his corn crop in order to build a baseball field. The voice gives other commands to Ray Kinsella (played by Kevin Costner) and, eventually, this farmer “goes the distance” to provide the field where ghosts of baseball greats from the past emerge from the corn to entertain and amaze a crowd of people arriving in a string of cars that extends past the horizon.

Ross doesn’t recall hearing any voices, but the idea of professional baseball coming to Iowa to perform in a cornfield spoke to him. “Within 20 minutes of the MLB announcement, I was on the phone to both Iowa Corn Growers Association and the NCGA,” he says. To use a baseball metaphor, this was a belt-high fastball down the middle for corn growers. “It was an opportunity that we could not miss,” Ross says.

As it turned out, he did not need to be so worried about urgency. The game, originally scheduled for 2020, had to be postponed due to the pandemic. “It took a couple of years to get here, but it was worth the wait,” says Neil Caskey, NCGA vice president of communications. “Our philosophy in communicating is to ‘meet the people where they’re at,’” he says.

“Unfortunately, it can be hard to find middle ground where you can meet consumers to start a conversation about corn.”

Corn conscious. A baseball field in an Iowa cornfield provides just that middle ground, and NCGA—with financial support from the Illinois Corn Promotion Board and the Iowa Corn Marketing Board—became an official partner of the event. NCGA’s Caskey says the communications strategy was simple—to celebrate corn.

NCGA’s ad spots during the nationally televised game were low-key. One simply consisted of Iowa corn grower Ross playing a game of catch with his eldest son, Hudson, on the family’s farm near Underwood, Iowa. A second spot had a harder sell, pointing out that ethanol is a ready and waiting solution for climate change, a superstar player all warmed up in the bullpen and awaiting only a tip of the cap from the current administration in Washington to get called into the game.

Top to Bottom. Kevin Costner, who played Iowa corn farmer Ray Kinsella in the movie, described the Field of Dreams baseball game as “perfect.” This 8,000-seat facility was named 2021 Ballpark of the Year by baseballparks.com. Iowa corn grower Kevin Ross saw the Field of Dreams game as an opportunity to promote corn that was too good to miss.

Breathtaking. In the movie, we are told that there is a time when all the cosmic tumblers have clicked into place and the universe opens up for a few seconds to show what is possible. That must have been what happened in Iowa on this special night. The grass was so green that the actor Costner, who was in town to lead the players out of the cornfield to start the game, bent down to examine the field and asked, “Is this grass real?”

It was real, a blend of Kentucky bluegrass varieties, and the 159 acres of corn that engulfed the field also was real. But it added up to a surreal setting for a baseball game, a brilliant palette of green-on-green that was made even more surreal by the majestic purple sky that was painted over the scene as the sun began to set.

This was a nationally televised game, and announcers Joe Buck and John Smoltz could not stop talking about the corn—how beautiful it was—and they attempted to explain such things as the difference between field corn and sweet corn. Then social media caught fire, starting in the bottom of the first inning when the first of eight home-run balls landed in the corn.

According to Nielsen Media Research, an audience of nearly 6 million—the largest to view a regular-season game on broadcast TV in 16 years—tuned in. It was also the most-streamed regular-season game in the history of FOX Sports, and it drew more than 17 million views across social media as well. MLB has announced that it will return in August 2022 for a game between the Cincinnati Reds and the Chicago Cubs. It’s hard to imagine that the next game could be as perfect as this inaugural one, but then again, the movie teaches an indelible lesson: Never underestimate the power of a dream. ‡ 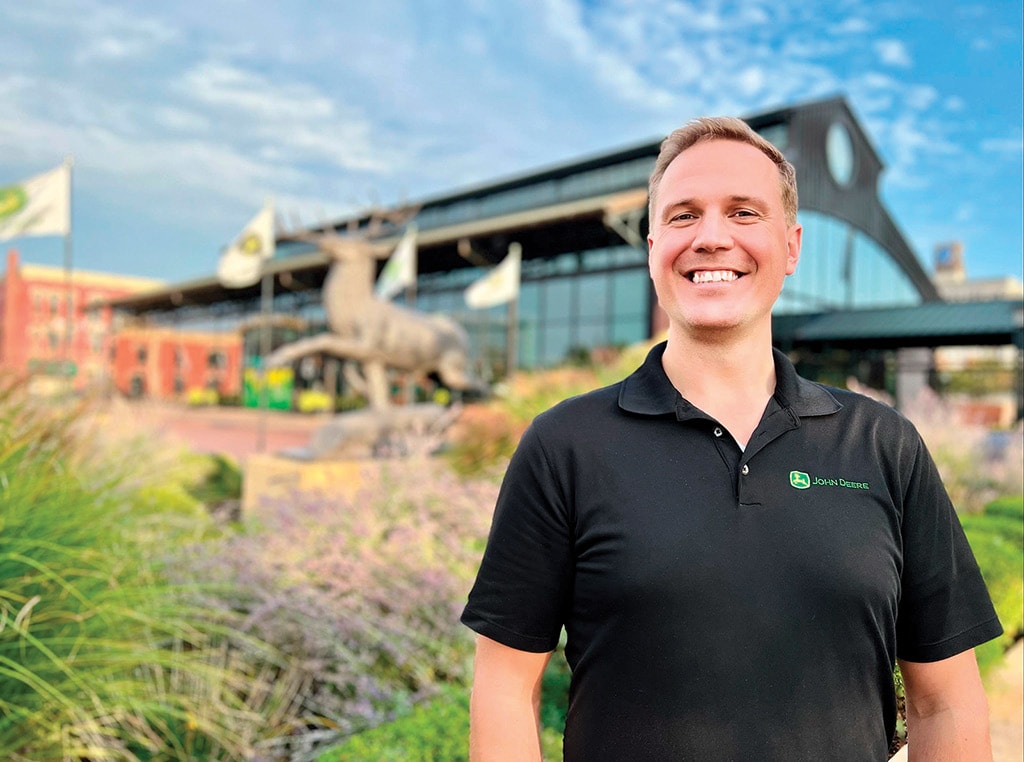 For the Love of Farming

For the Love Full Story