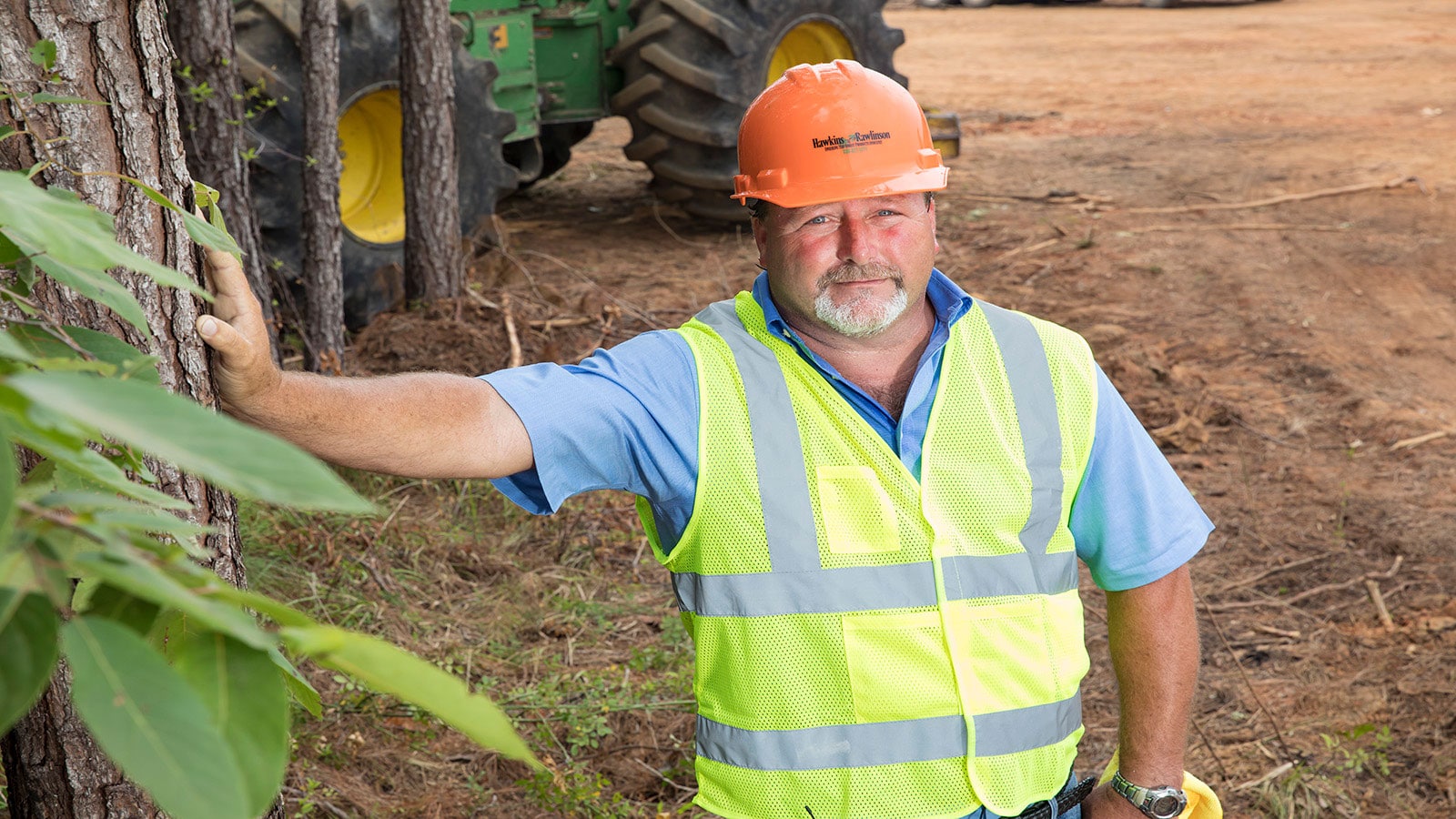 Before chain saws and modern logging equipment such as skidders and feller bunchers revolutionized the industry, logging was hard, manual work. In the early part of the 20th century, loggers followed the timber harvest and lived in logging camps. “My grandfather cut wood using crosscut saws and skidded it with teams of mules,” says Ray Cobb, owner of L&R Enterprises LLC in Brundidge, Alabama. “They’d camp out the whole week, come home weekends, then go back on Monday and do it all over again.”

CAMP COBB
Traditional logging camps began to phase out after World War II into the early 1960s, as the modern road system grew and crews could drive to work. But when Cobb started his own logging company in 2000, his first job was a throwback to that earlier era.

“Our first logging site was on the Tallapoosa River, which was more than a two-hour drive away from home,” he recalls. “I didn’t want to spend that much time driving when I could be logging. So my wife Valerie, my son Brian, and my brother Jeremy set up tents along the river, just like an old logging camp 100 years ago.”

Cobb and his brother logged that tract all summer, moving six or seven loads a day, while Valerie kept the camp in order and looked after their six-year-old son. “Every morning we’d wash up in the river. Valerie would fix breakfast while we were loading trucks. She wanted to grab a chain saw and help with production, too, but we agreed it was best if she helped out in other ways.”

HIS COMPANY, HIS WAY
Cobb got his start in logging working for C.R. Pate out of Brooklyn, Alabama, where his father Lonnie and his grandfather Frank had also worked. In the mid-1990s, Cobb and his wife moved to Troy, Alabama, so she could finish nursing school at Troy University. He took a job with logger Ron Morgan before starting L&R Enterprises LLC.

Cobb was the first in his family to start his own company, purchasing a used John Deere 648G Skidder and a 643D Feller Buncher, along with a loader. “I wanted to get my own equipment and run things my way,” he recalls. “For a long time, we had people telling us we couldn’t make it. We would prove them wrong.”

After the summer by the river, the company took jobs closer to home and hired another employee. His wife returned to nursing school while helping with the fledgling logging company’s books. After a few years, Cobb also added a second skidder. “If one tractor is stuck, everyone is stuck. But if we have a second skidder, we can always get unstuck.”

Trucking was a challenge in the early days. “We’d start contracting with someone. Then they’d think the grass was greener and go somewhere else.”

Fast-forward almost 20 years and L&R Enterprises is going strong. The company runs all newer John Deere machines, as well as five logging trucks (although Cobb claims trucking is still a headache). The crew mostly clear-cuts loblolly pine or oak and poplar, depending on what the three sawmills in the area need. “As long as these three mills keep going, the future is looking up,” says Cobb.

For a long time, we had people telling us we couldn’t make it. We would prove them wrong.

STOP AND LISTEN
When asked if there was a moment or milestone in his journey when he felt sure his company would succeed, he replies, “I knew the whole time. From day one.”

But proving the doubters wrong is not the only thing that motivates Cobb to get out of bed every morning. “I grew up in the woods and just enjoy being out here. All you have to do is just stop and listen to the wildlife. It’s hard to explain if you haven’t done it. It’s something I love.”

Cobb is also passionate about his family business. After finishing nursing school, his wife completed a master’s program and became a nurse practitioner. She also continues to handle the company’s books and raise the couple’s two younger children, Alexis and Colin Ray. Cobb’s brother Jeremy runs the loader, and his oldest son Brian likes to run the feller buncher. “He went to college, but he told me he’d rather help me. One day I believe he will run the business.”

The company’s current fleet of John Deere equipment includes two 648L Skidders, an 843L Feller Buncher, and a 437E Knuckleboom Loader. After buying used equipment for years, Cobb had an epiphany: Running new equipment could be more cost effective than running old machines. “I bought used because, if times got tough, I didn’t have as high of a monthly payment. But what I did have was a pile of parts bills.”

In 2013, Cobb bought his first new John Deere machines. “I was spending my weekends working on my used equipment, often not even knowing if the machines would be ready come Monday morning. With the new equipment, you don’t have the downtime. Sure, the monthly payment is higher. But after I took into account the cost of parts and the hours lost to downtime, a new machine really made sense. You’re a lot more productive at the end of the day when you are not always stopping to fix the machine.”

New machines also come replete with the latest production boosting designs and features. “Our 843L Feller Buncher is a really solid machine — very stable and maneuverable on hills. The Quick Dump feature works really well — just press a button to release the trees in one motion and then start grabbing trees again.”

Cobb appreciates how easy the 648L Skidder is to run. “It’s easier to train operators on the new skidders than the old ones. With the CVT (Continuously Variable Transmission), there’s no more shifting. Now there’s just forward and reverse. Set the maximum speed and CVT automatically does the rest, so you don’t have to hunt around for the right gear.”

The rotating high-back seat improves rearward visibility. “You can just turn your seat around and go back down a row or operate the grapple without having to look over your shoulder. That really helps reduce neck strain.”

ALWAYS RIGHT THERE
Cobb has purchased all of his equipment from his local John Deere dealership, Flint Equipment Co., including the first 648L Skidder sold in the Southeastern U.S. He’s known his salesman, John Witherington, for decades. During the years before Cobb formed L&R Enterprises, the two worked together for Ron Morgan. It was during this time that Cobb spoke with W.J. Sorrell, the timber dealer for whom Morgan contracted, who just so happened to need a logger to work the riverbank tract on the Tallapoosa that summer.

Witherington was working part-time for Morgan while he was finishing forestry school. He would later work as a forester for a company that would eventually become Smurfit-Stone Container Corporation before he took a job with Flint.

“John and I have been friends for a long time,” says Cobb. “He and Flint Equipment have always been right there for me. Deere machines have always been easy for me to work on. But if I ever have a question, I just call over and talk to their mechanics, and they point me in the right direction. And if it’s something I can’t fix, they get right on it. I think Flint and John Deere will be there for me for many years to come.”

On site in Alabama with logger Ray Cobb.