Band of Brothers on the Bayou 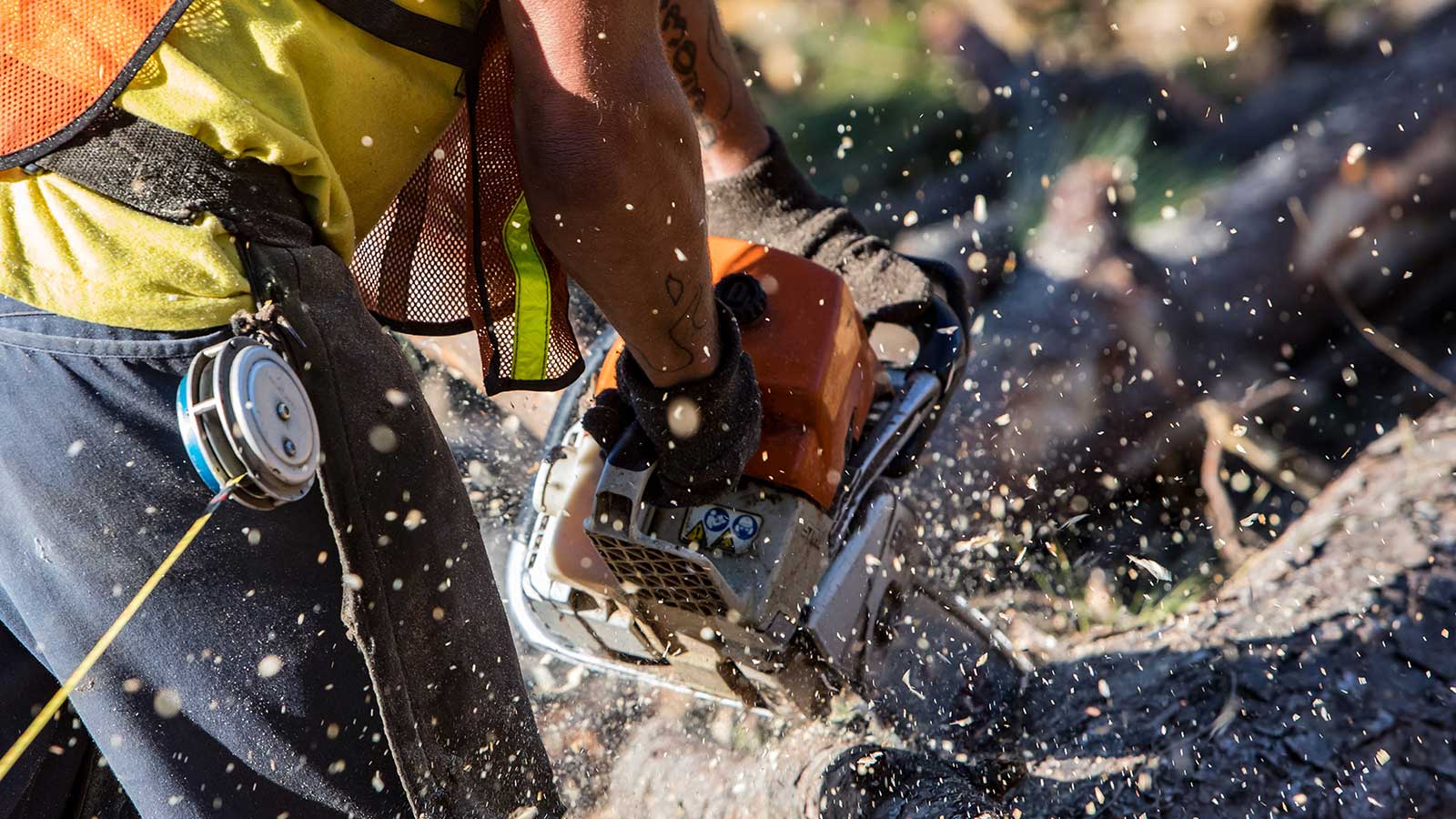 About an hour's drive south of Shreveport, Zwolle is the unofficial capital of Louisiana logging. "Our area is synonymous with logging," says Jeffrey Martinez. "A lot of good logging families call Zwolle home. You know how they say the S.E.C. [Southeastern Conference] is the best conference in college football? I believe we have the best group of loggers in the South."

A famous sports figure once said that it ain't bragging if you can back it up. And the Martinez family can back it up. Jeffrey's father, A.T. Martinez, was the first recipient of the Louisiana Outstanding Logger Award in 1987.

Not that the Martinez brothers are ones to brag. Jeffrey is very humble about the award, which is presented by the Louisiana Logging Council in recognition of best practices for job quality and safety. "The year after I won, I judged the following year's nominees and was very impressed by the winner. I would have finished second that year for sure."

Jeffrey and his brothers could not have achieved the success they have had without the support of their father, who passed away in 2010. "He always set a good example for us," says Kevin. "He did whatever it took to make it, working from dawn to dark, or past dark."

"I wish other people could have had the opportunity to work with him," says Jeffrey. "We always hear from past acquaintances and employees about the advice he gave them and his personal touch. And we owe a lot to our mother, too. Any successful businessperson must have people behind them, and she also set a great example. Our parents instilled in us the values that we needed to become successful."

Jeffrey's mother couldn't be prouder. "I think my boys are the best," says Nanette. "Then again, they had a really good teacher. I know A.T. expected the best."

A.T. Martinez drove a truck for his father's logging operation in the late 1960s. "Back then everything was hand-felled, and they used tractors to skid logs and forklifts to load trailers," recalls Jeffrey. "My grandfather was a pole expert. He used to love to mark transmission poles ahead of the logging crews, something the Martinez crews like to do today."

In 1972, A.T. started his own logging company, Martinez Brothers, with his brother, G.J. "He began taking us out to the woods at a young age," recalls Kevin. "My first jobs were to clean and grease the log trucks and to fix flats. Later I learned to stack logs with the log loader. We literally grew up in the woods."

A.T. taught his boys the importance of hard work and self-reliance. "He taught us to do things like maintenance ourselves instead of depending on other people," remembers Mark. "That was the best route because you have a lot fewer headaches. We learned to put in long hours and be very hands-on."

In 1980, A.T. went into business with his sons, Jeffrey and Mark, after they graduated from high school. "When I got out of high school, I was ready to go," says Mark. "I never had any doubts this is what I wanted to do. My family works in the woods — it's in our blood." Kevin joined his dad and brothers in 1984. "I started driving skidder for my dad the day after I graduated," he says.

In the late '80s, the three sons branched off into their own operations with the backing of their father. "Dad helped Mark get a John Deere feller buncher, and he helped Kevin and I get our own Deere skidders," recalls Jeffrey. "He told our local Deere dealer, "I stand behind these guys. I offer no money down — just my good name and assurance that they will pay you." That bought us enough time to earn money for a down payment."

"I've been passionate about running a cutter since Dad got one in 1981," adds Mark. "I just love cutting. To this day, it's what I spend 90 percent of my time doing."

Although separate entities, the companies often worked together on the same operation, cutting the stumpage A.T. bought. "Timber buying is where my dad really made his mark," says Jeffrey. "He always had enough timber to keep us busy. He stopped buying timber in 2008. But because of the training we got from him in terms of merchandising and maximizing the value of timber, we were able to align ourselves with other customers."

Over the years the three companies grew more independent, though they still have opportunities to work together once in a while. Jeffrey and Kevin both began contracting with Walsh Timber Company in 1998. They mostly clear-cut pine and hardwood for pulp, lumber, plywood, and ties.

"We actually had an opportunity to log the same tract last year," says Jeffrey. "It was enjoyable — a throwback to the old days when we were logging for Dad. But we still help each other all the time. If one of us is shorthanded or someone is taking a vacation, we'll move employees or equipment around to fill the void. And at family get-togethers, we always pick each other's brains. That's one thing that Dad said before he passed — how proud he was just seeing his sons get along."

"We have a close family," adds Kevin. "We work together. That's what my father instilled in us — to help each other. And that's something I will remember forever — when all of us boys were working together for my dad."

A.T. was a John Deere man since day one. His first skidder was a Deere 640A Cable Skidder. Mark recalls running a Deere 440C Skidder when he was in high school. Both had open cabs.

Today the three brothers, along with Mark's son, Stephen, run John Deere L-Series Skidders. Stephen began working for his dad when he was about 20 years old. Unlike his dad, he really took to running a skidder. "That's what I started on, and I never wanted to get off. You can really see everything that's happening on the job, which helps me manage what's going on."

Much about John Deere skidders has changed over the decades. Today's machines are more comfortable and user friendly. "I love the joystick controls," says Stephen. "They're a lot smoother and more responsive. The cab is a lot more spacious than past models, and with the rotating seat, you're not straining your neck as much. At the end of the day you feel the same as when you got into the machine. You are not feeling beat down."

Stephen believes the latest skidders are more productive and reliable than ever. "They're so powerful. It hardly feels like anything is behind you when you make a drag. And they're stout. I've had the skidder for over a year and haven't had to do anything aside from regular maintenance. Uptime means more than anything to me."

"As my son or any of my brothers will tell you, it's all about getting things done in a timely manner," says Mark. "John Deere machines are productive and reliable, but the product support we receive from our local dealer, Doggett, is what really sets Deere apart. Whether it's keeping us on top of regular maintenance or providing the parts we need, they help keep the wheels rolling."

Stephen and Kevin also run 843L Feller Bunchers. "They're very comfortable and productive," says Kevin. "I've never seen hydraulics work this fast. That makes a world of difference in the hilly terrain we work in. And all L-Series machines are so easy to work on. Everything is wide open and easy to get to."

Over the years, the Martinez family has tried other brands but have remained extremely loyal to John Deere. "It's hard to change when we've had such good luck with them over the years," says Mark. "Like Dad, we believe in John Deere."

If anyone needs help, give them a hand.

Stephen was too young to know his grandfather, A.T. But his father, Mark, taught him the same lessons about hard work that A.T. taught his three sons. "The biggest thing Dad told me is just to work hard and to treat people right," says Stephen. "If anyone needs help, give them a hand."

Mark lent a hand when his son went on his own to form Timbersam LLC in Shreveport four years ago, after he had worked for his dad for eight years. "He supported me 100 percent," Stephen recalls. "I already had a skidder, so I rented a feller buncher from him and bought my own loader. But the best assets he gave me were his two best employees. I've really learned a lot from them."

All of Stephen's employees are over 50 years old. "I'm in my early 30s, and it's getting tough to find anyone my age or younger to work in the woods anymore. Most want to work in the oil fields. I hope that changes, because someday I'll need someone. Maybe I'll have to wait for my two boys to grow up (laughs)."

Despite the difficulty of finding future loggers, the Martinezes are cautiously optimistic about logging's future. "If you are willing to put in the time and be hands-on, you can make a good living," says Mark. "But you have to be dedicated. It's a hard living, but it's an honest one. I'm really proud to provide for my family and of the reputation that the Martinez name has established."