A Tale of Two Legacies 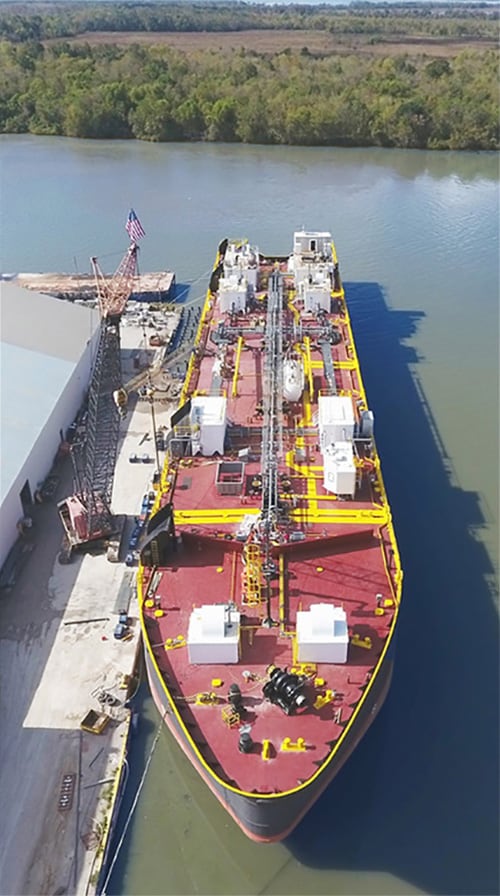 Vane Brothers Company's white tugboats, distinguished by their large blue "V," are a familiar sight while pushing barges on the Baltimore waterfront. Founded in 1898 as a quaint ships' chandlery, Vane Brothers has become a large American marine services firm and a major transporter of oil, asphalt, and other liquid products along the Eastern Seaboard.

"Vane Brothers is a family-owned business with a deep and rich maritime history as vessel operators and ship chandlers, going back to the days before internal combustion engines and screw propellers even existed," says C. Duff Hughes, Vane Brothers president. "Our company has consistently grown, diversified, and successfully adapted to changing times in the industry. That's why we celebrate more than 120 years in operation."

The three Double Skin (DS 801-803) barges measure 123 by 22.5 meters (405 by 74 feet) and can carry petroleum products in an amount that is equivalent to about 11,323 metric tons (83,000 barrels). Each barge is equipped with three 250-kWe generator sets powered by 6135AFM85 marine engines. The radiator and fan assembly for each of these generators is remote mounted about 9 to 12 meters (30 to 40 feet) away. "We did that to improve heat rejection and to address space limitations within the machinery space," explains Steve Magdeburger, special project manager for new barge construction at Vane Brothers.

Each barge is equipped with three 6135HF485 auxiliary deck engines. Two drive centrifugal pumps with a combined pumping capacity of approximately 1,091 metric tons (8,000 barrels) per hour. The other powers an OmniThruster bow thruster. In addition to the auxiliary deck engines, the barge is equipped with a 99-kWe emergency standby generator powered by a 4045AFM85 engine.

All engines are certified by the American Bureau of Shipping (ABS). John Deere engine distributor, engines, inc., packaged the engines and designed the remote radiator and fan assemblies. Devall Diesel Services, a John Deere marine engine dealer, then supplied Conrad Industries with the 21 engines and radiators.

Vane Brothers has an extensive history with John Deere. The company believes in standardization of equipment for many beneficial reasons. Magdeburger says shore-side and afloat personnel are familiar with John Deere because they use the engines throughout the fleet on both tugs and barges.

"We have many John Deere engines in our fleet that are prime movers or that power generator sets," Magdeburger reports. "So we already have a healthy inventory of spare engines and parts. And we have built strong relationships with John Deere dealers throughout our area of operation along the East Coast. When it comes to engine reliability and consistency over the long haul, John Deere doesn't let us down."

"My customers are the mariners who operate and maintain the equipment," he adds. "I strive to meet their requirements and expectations for ease of operation and maintenance. Truthfully, once a John Deere–equipped vessel enters service, I rarely hear of an issue related to the engines. And if I do, I'm confident that the John Deere support network will step up and help us resolve the issue in an efficient and timely manner. I've been very pleased with John Deere."

Our company has consistently grown, diversified, and successfully adapted to changing times in the industry. That’s why we celebrate more than 120 years in operation.