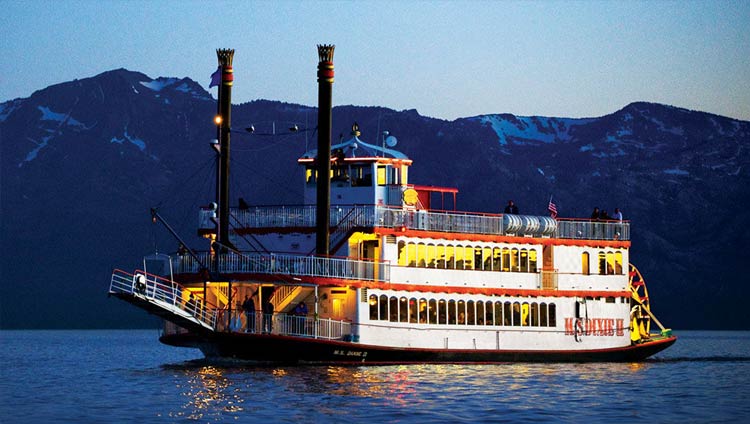 Straddling the border between California and Nevada, Lake Tahoe shines blue as topaz amid the majestic Sierra Nevada. Surrounded by a conifer wilderness, Tahoe is North America's largest alpine lake, and its crystal-clear waters make it among the most pristine and picturesque. It's no wonder famed American author Mark Twain dubbed it the "fairest picture the whole earth affords."

Each year about 3 million people visit Lake Tahoe. A popular destination on the lake is Emerald Bay, and its bright green waters and waterfalls are so stunning that it was designated as a National Natural Landmark and is one of Lake Tahoe's most photographed locations.

One popular way to soak up the beauty of Emerald Bay is aboard the MS Dixie II. Owned by Aramark and operating out of Zephyr Cove Resort, the 500-passenger, three-deck boat combines the nostalgic paddle wheel experience with the safety and convenience of John Deere power. Twin PowerTech™ 6135AFM85 engines provide main propulsion and a PowerTech 6068SFM85 engine hydraulically drives the paddle wheel.

MS Dixie II operates year-round, offering three daily cruises to Emerald Bay during the summer months and two in the off-season. Daytime cruises deliver a sightseeing tour of the bay, while sunset cruises serve up the bay's visual splendor with some dinner and dancing to a live band.

Evening dinner cruises last three hours. The MS Dixie II takes passengers on a 32-kilometer (20-mile) trip to Emerald Island at a relaxing pace of about 7 knots per hour — the perfect speed to soak up the scenery and capture some treasured vacation photos.

Jay Rodriguez, Aramark's water operations manager, wants to ensure the experience aboard the MS Dixie II is pleasurable and peaceful, and he credits the vessel's engines for making this possible.

"From the first time we fired them up, we noticed the engines were very quiet and smooth," Rodriguez said. "You barely notice them running, which is definitely a plus when you have 400 people on board."

The MS Dixie II runs 365 days a year and has garnered a solid track record of safety and reliability. "Reliability is our focus, and I do think that the boat is very reliable," said George Sojka, senior sales and marketing manager. "That's what we expect out of our John Deere engines, and they haven't disappointed us."

Reliability is our focus, and I do think that the boat is very reliable. That's what we expect out of our John Deere engines, and they haven’t disappointed us.