A Tractor of the Sea 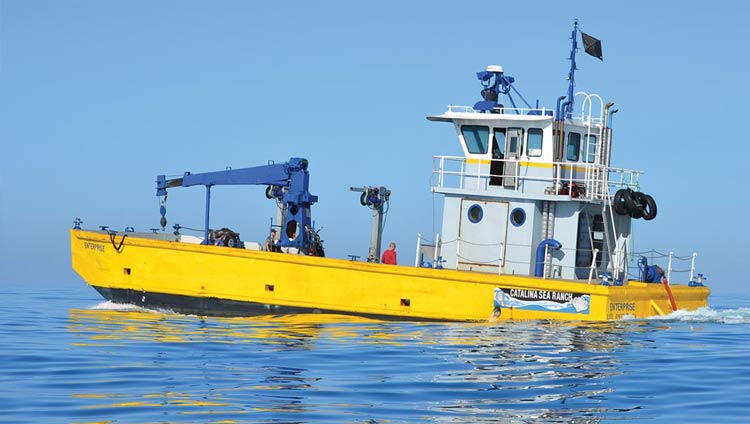 Phil Cruver would love nothing more than to whet your appetite for succulent farm-raised mussels.

The president and CEO of Catalina Sea Ranch speaks with excitement as he describes the economic and palatable benefits of plucking mussels from the sterling blue water off the coast of southern California and shipping these ocean gems to consumers quickly — fresh and alive.

He's so confident in the quality of fresh mussels over imported frozen ones that he hopes it will boost per capita consumption in the U.S., which is a mere 1/3 pounds a year. Eventually, he hopes to export the shellfish.

Catalina Sea Ranch has attracted investors and gleaned the support of the government as the first federally permitted and operational offshore aquaculture facility in U.S. federal waters. Located 6 miles offshore, about 1.5 million mussels hang suspended to a series of sub-surface ropes plunging 150 feet deep. Currently the operation spans 100 acres, and Cruver plans to double it and add other shellfish species, such as oysters, as well as seaweed crops.

Supporting the farming activities is the 72-foot Enterprise, a converted landing craft. It has ample deck space and is outfitted with specialized mussel processing and longline management equipment. However, when Cruver purchased the 64-year-old vessel, its original engines billowed "a cloud of smoke" and was in dire need of a repower.

Matt Grant is the vessel's captain. He and his two crew members operate the vessel and its deck gear. The vessel performs various farming duties such as adjusting anchors, floats, and restocking mussels. On days when it harvests mussels, the Enterprise is loaded down with as much as 20,000 pounds by day's end. Yet that’s no problem for the engines, says Grant. "I normally run 1400 to 1500 rpm, and we can cruise 8.5 to 9 knots. Even when we load the boat heavy, we achieve similar speeds with that weight."

Cruver says the fuel economy of the Enterprise dramatically improved after the repower. "The Enterprise goes out at least five days a week, and it runs an hour and 15 minutes each way. Cruising 8 to 10 knots, the fuel economy is just wonderful," he says. "These are efficient engines, and that's very important to our economics."

Cruising 8 to 10 knots, the fuel economy is just wonderful. These are efficient engines.