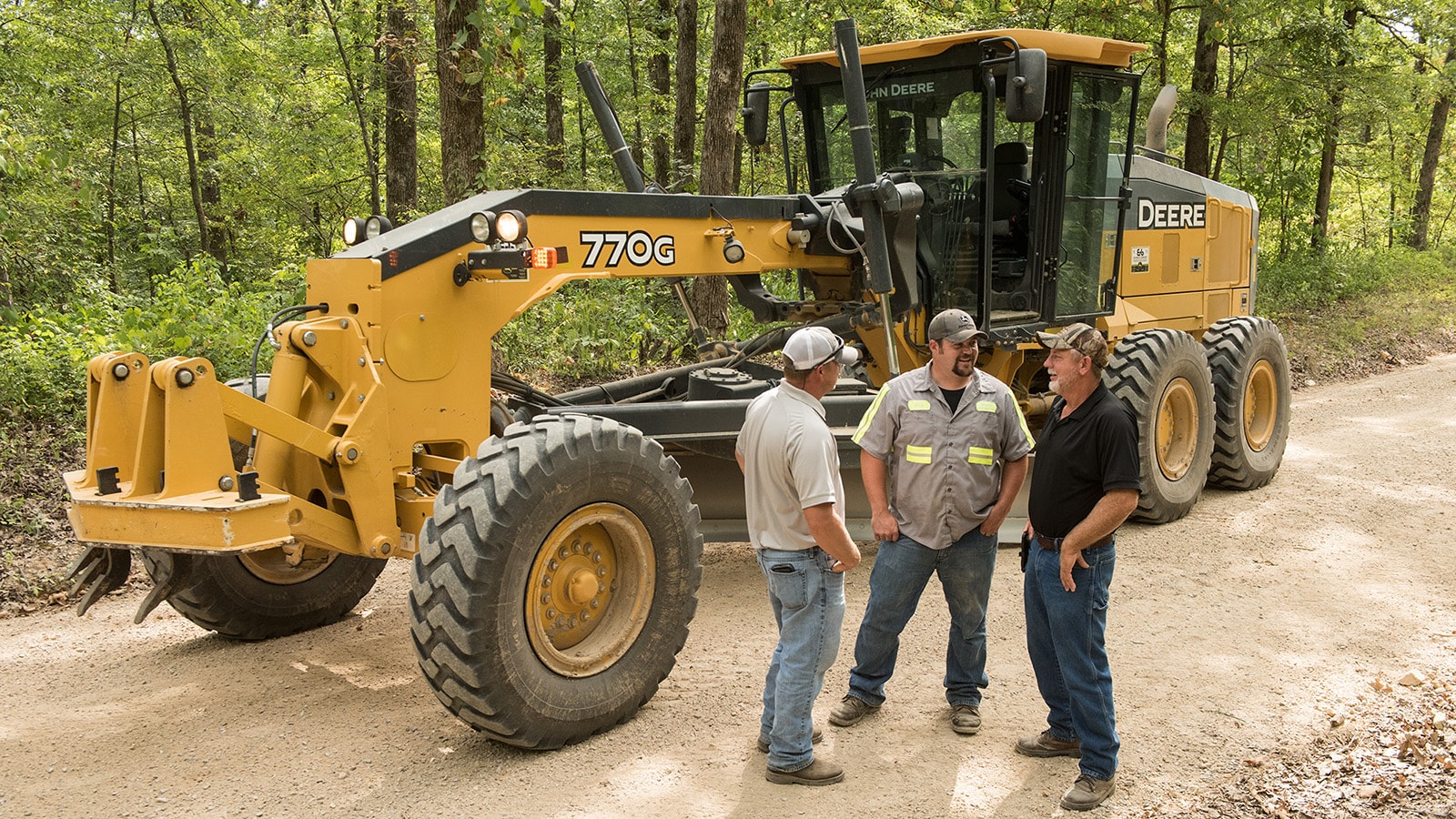 From the rolling hills bordering the Mark Twain National Forest, to the bottomlands of the St. Francis River, Butler County’s diverse 699 square miles create a multitude of challenges for the people and machines tasked with maintaining its 1,000 miles of gravel roads.

It's mid-July in Missouri. Even though it’s been extremely hot and dry, with temperatures in the upper 90s, several of the Butler County Highway Department’s 10 John Deere 770G Motor Graders are out and about, doing what they can to keep the gravel roads passable. With very little precipitation to aid the grading, there’s not much that can be done until it rains.

"We haven't graded a lot so far this summer because nearly every rain has missed us," explains Robby Moore, Butler County Highway Department eastern foreman. "Grading when it's this dry creates "washboards" that make roads worse. But there are some places where they've gotten a few showers and other areas where they irrigate the crops and the constantly wet roads get beat out and rough. So we have to spot grade here and there."

Drought wasn't an issue this past spring, however. Quite the opposite. Much of the eastern portion of Butler County consists of low-lying farms with flat fields that drain poorly. Torrential rainfall caused extensive flooding of the St. Francis and Black rivers, washing out roads and drainage structures. "When you have the kind of spring we had, we weren't maintaining roads — we were rebuilding them," recalls Moore.

"Rockslides, downed trees, and washouts were a frequent occurrence in the hills, too," adds Dewayne Casinger, Butler County Highway Department western foreman. "After a heavy rain, we'd go out and bring the rock back to the top of the hills and then clean out the ditches. We usually use our 770Gs instead of an excavator or backhoe to do the ditch work. They make back-sloping so much easier, and the ditches look good when we're done."

There’s nothing I’ve found that’s difficult to do on these graders.

BETWEEN A ROCK AND A HARD PLACE

But it’s not just the weather that slows productivity. Big rocks are abundant in the hill country, and they’re hard on tires and blades. “We replace cutting edges every two to three days,” says Casinger. “Last month we had two graders come back in within a half-hour with busted edges. If the rocks get too bad, we have to jackhammer them out or try to cover them with good rock.”

Potholes are also plentiful. “You need plenty of power when you’re cutting hard to take out the potholes,” says Casinger. “And you want a powerful blade to carry a moldboard full of rock, so you can swing the blade around as you fill the hole. Our John Deere graders have what it takes to get the job done.”

Due to the volume of gravel roads, five of the graders are staged throughout the county and only return to the Poplar Bluff Highway Department shop for scheduled maintenance or major repairs. All 10 are equipped with JDLink™ telematics to track machine location and condition.

“It’s a big time-saver,” says Greg Dodd, Butler County Highway Department shop foreman. “In the past, if we had a breakdown we’d get a call from the operator, drive out and search for the machine, diagnose the problem, pick up parts, then return to do the repair.

Now if there’s an issue, I receive a text message and an email alerting me of the machine’s condition and exact location. Knowing what the issue is and where the machine’s located, the technician can arrive on-site with the parts and tools necessary to do the repair.” Preventative-maintenance reminders are also sent to Dodd via email. "We used to track all of that stuff manually, but now I get service reminders automatically." Dodd is also a big proponent of the G-Series Graders" hydraulically reversing fans. "In the dusty conditions in which we work, it's another time-saver," he says. "They periodically reverse and clean out the cooler cores, which eliminates our having to send out a fuel man with an air compressor to blow things out in the field."

When machines do come into the shop for periodic preventative maintenance, service is quick and easy. "There's nothing I've found that's difficult to do on these graders," says Dodd. "Even pulling fluid samples is quick and easy, with conveniently positioned ports keeping the samples clean and everything neat."

Speaking of keeping things neat, Moore and Casinger take pride in the fact that their crews cover every mile of gravel at least once a month, weather permitting. "With towns the size of Poplar Bluff within our county, we have the financial resources to acquire the equipment we need to do our best work," says Moore.