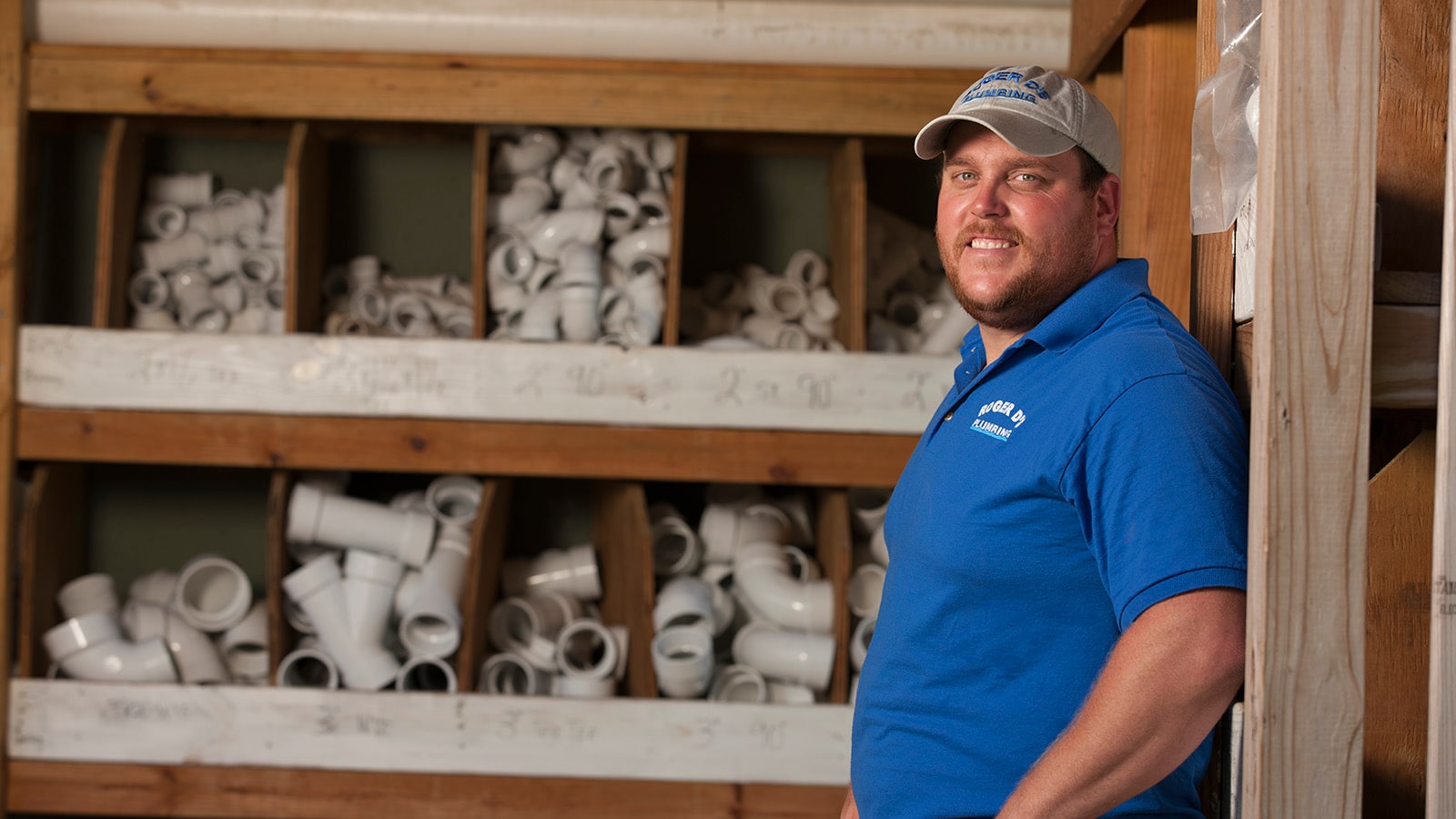 When he was growing up, Roger Haislep, owner of Roger D's Plumbing in Athens, Alabama, was inspired by his grandfather, who owned a nursery business. "He taught me at an early age that if you work hard, you will always be successful. You will always have a job. I took the same passion he had for his business and brought it to plumbing."

The 29-year-old Haislep loves being able to teach his younger employees a trade. "There's nothing better. Plumbing is hard work, but this country was built on hard work. It's tough, but it pays well and there's a future in it. People will always need plumbers."

IT'S A DIRTY JOB

Haislep understands the trades have been in decline in recent decades, as high schools have cut trades classes and encouraged students to go to college to pursue four-year degrees. "I think it started in the '80s, when people started going crazy about computers. Everybody wanted a tech job, and the trades went downhill.

A lot of the old-timers in plumbing are retiring, so there's definitely a labor shortage and skills gap."

But he is hopeful the trades will make a comeback. "Learning a trade is awesome. If you have a trade, you will always have a steady job and something to fall back on. I'll be a master plumber until the day I die."

Haislep is a big fan of Mike Rowe and his show Dirty Jobs. "He's awesome. He helped put trades back on the map. He's out there showing people how many different jobs are available. They see him out there doing all these different things, and they think, 'That's not so bad. Maybe I can do that.'"

…BUT SOMEONE'S GOT TO DO IT

Haislep started Roger D's Plumbing in 2009 right after the start of the Great Recession, not the easiest time to open a business. "I was 21 years old and had just been laid off by another plumber," he recalls. "I was nervous, but I had just passed my Master's test, which is what you need to start a business in Alabama. I thought, now is as good a time as any."

The young plumber soon landed a large contract with a pizza place in Decatur, Alabama, and he was off and running. He immediately bought a shiny new van and began renting a John Deere 17D Compact Excavator. Like many new business owners, he followed the old axiom of "fake it until you make it."

If he looked and acted the part, people would believe in him and give him a shot.

Haislep understands the importance of image and strong branding. The company name, Roger D's Plumbing (D is the first initial of his middle name), is easy to remember, and it rolls off the tongue more naturally than "Roger Haislep Plumbing" or "Roger H's Plumbing." His logo is bold, yet simple. When his crews show up, the brand adorns their hats, shirts, and trucks. Everything combines to convey an attitude of professionalism that says these guys can get it done. "We're a small business, and to succeed, we've got to look the part," says Haislep. "We've got to make a powerful impression."

The company's new John Deere 317G Compact Track Loader (CTL) and 35G Compact Excavator also convey confidence and conviction. "They're reliable," says Haislep. "They get the job done when I need to get it done — that's money in the bank. And they are compact so they can get easily into the tight spaces where we usually work. Yet they have a lot of power and are spacious and comfortable. They're just great machines."

…If you work hard, you will always be successful.”

Roger D's Plumbing is currently working on several new Dairy Queen® franchise locations, which are typically built on tight 30-ft. by 30-ft. slabs, each with 30 or 40 pipes coming into it. After using the 35G to dig trenches for the pipes, crews backfill using the 317G.

"The 35G is a strong, powerful machine. It has the digging depth we need, with the power to break through rocky soil. And I love the zero tail swing. It really helps in tight situations when you are up against a building. And with its compact size and great visibility, the 317G CTL is also really awesome at maneuvering in confined areas and around a bunch of pipes without breaking anything."

Haislep appreciates the creature comforts on both machines. "I'm a larger guy, and they're easy to get in and out of. The entryway is very wide, and the inside is spacious and comfortable. Controls are very intuitive and within easy reach."

He also loves the universal Quik-Tatch™ attachment system. "You can just drive up, hit the button, drop an attachment, and hook up the next one. You don't have to get out of the cab and pull pins. It really saves time."

The company runs a range of attachments — including a rake, auger, trencher, scrap grapple, and buckets. "Drilling holes used to take two people when we did it with a tractor and a three-point hitch. Now it's a one-person job."

The attachments have given the company a lot of flexibility. "We've taken on jobs that we wouldn't be able to do without John Deere machines. They've really helped us to grow as a small business."