Beginning back in March last year, we asked our customers, "How would you make a big impact in your community?" Eric Moores was one of the 665 inspiring people who responded. He believed his high school Building Trades class in Woodbine, Iowa, was making a difference by improving housing in his community while expanding career opportunities for his young students. The people who voted in our Small Machines. Big Impact contest agreed with him.

Last October, Moores took delivery of his prize, a 333G Compact Track Loader, at a ceremony at Woodbine High School. As he walked out the front door to see the machine for the first time, a large group of students greeted him with applause. The local John Deere dealership, Horizon Equipment, presented the machine to him, along with a $2,000 check to help with the cost of his community projects. Moores said a few humble words of thanks, then — always the teacher — began to give the students a short lesson on how the machine is commonly used.

Moores exemplifies what the Small Machines. Big Impact. contest is all about. His passion for his projects and his community is always on full display. When Moores heard rumors that Horizon Equipment had received the 333G the day before the ceremony, he actually drove around the building hoping to catch a glimpse of the machine. "I admit it," he laughs. "I was spying on my dealership. Good thing they had it parked inside, so they wouldn't spoil the surprise. But I was very excited." 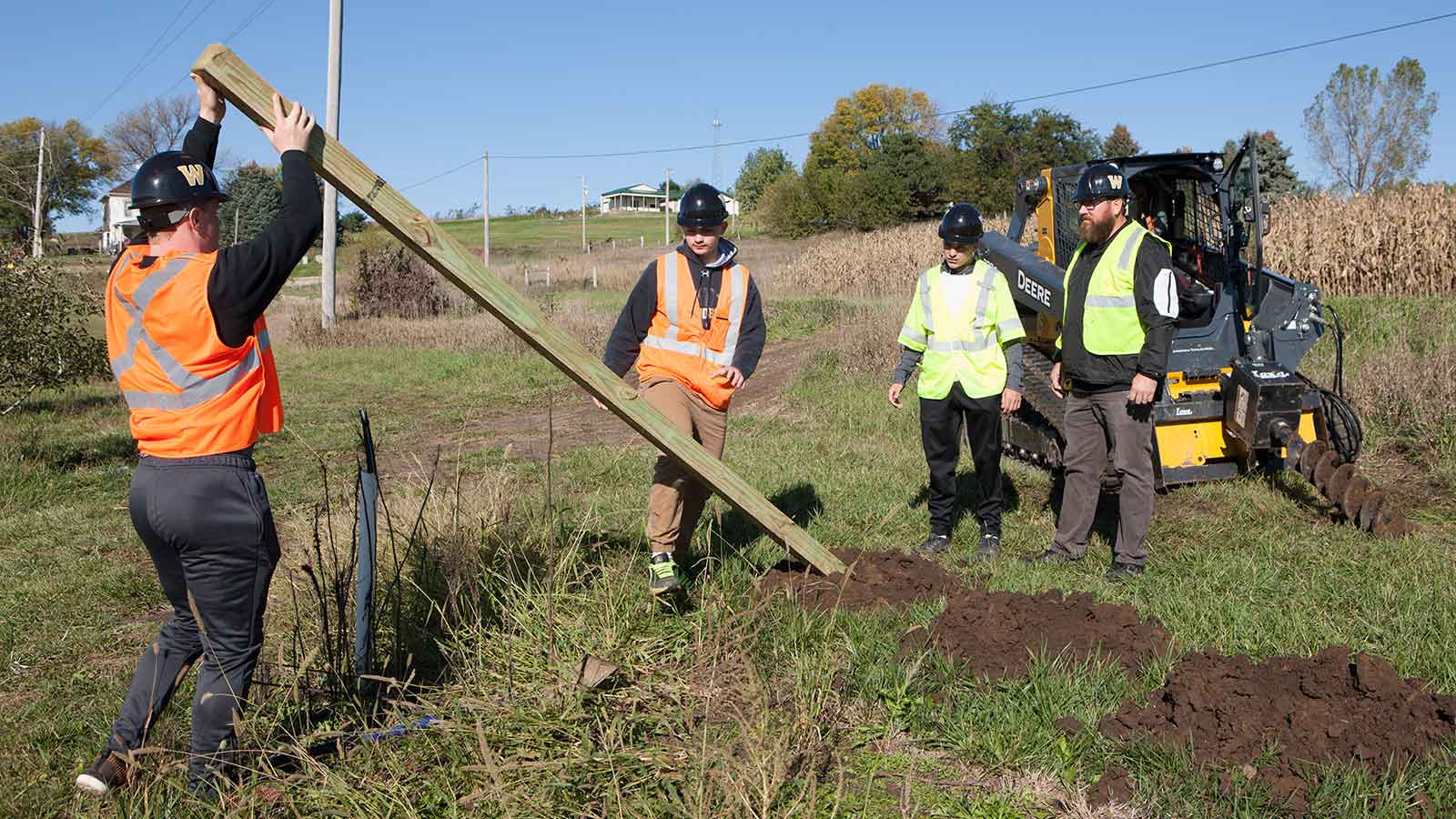 It's fitting that Horizon Equipment presented Moores with the prize, as the dealer had first told him about the contest. "One of my contacts there emailed me a link," he recalls. "He told me I should enter because he thought my Building Trades class was doing some good things. It sounded like a great opportunity, so I did."

Each year Moores' class builds a new home in the area. The houses the class builds are sold almost at cost, providing affordable housing that attracts new families to the community. "There are no new developments in our small town, so we're finding old homes that need to be torn down and putting up new ones," says Moores. "The program has been an amazing opportunity to improve the housing stock in town and give the local trades some work."

The class also works on other community projects, which last year included constructing a local food pantry. "Our program has rekindled this enormous sense of community pride that began when we rebuilt our main street, which was named a Great American Main Street by Main Street America™ in 2014," says Moores. "The community really embraced the contest and has had a lot of fun with it."

What I want them to take away from this program more than anything is a strong work ethic.

Moores' class provides students with hands-on knowledge about the building trades. "The kids get to work on a home every day," explains Moores. "They also get to observe the contractors we bring in to help keep the projects on schedule. I want them to experience a bit of each trade —  whether it's plumbing, electrical, framing,  or trim carpentry — and determine if it's something they might want to pursue. There's a huge demand for skilled trades in this country, so it's a great opportunity for them to learn about rewarding jobs that pay well."

The students also learn how to work hard. "What I want them to take away from this program more than anything is a strong work ethic. That's what every employer is looking for. And it's what will really present the greatest opportunities for these students down the road."

Moores tells his students to treat the class like a job, and he grades based on participation. "I tell them I am their boss. They need to show up on time and be tuned in and ready to work. Otherwise, they won't earn a good grade. In the real world, they would not get paid." 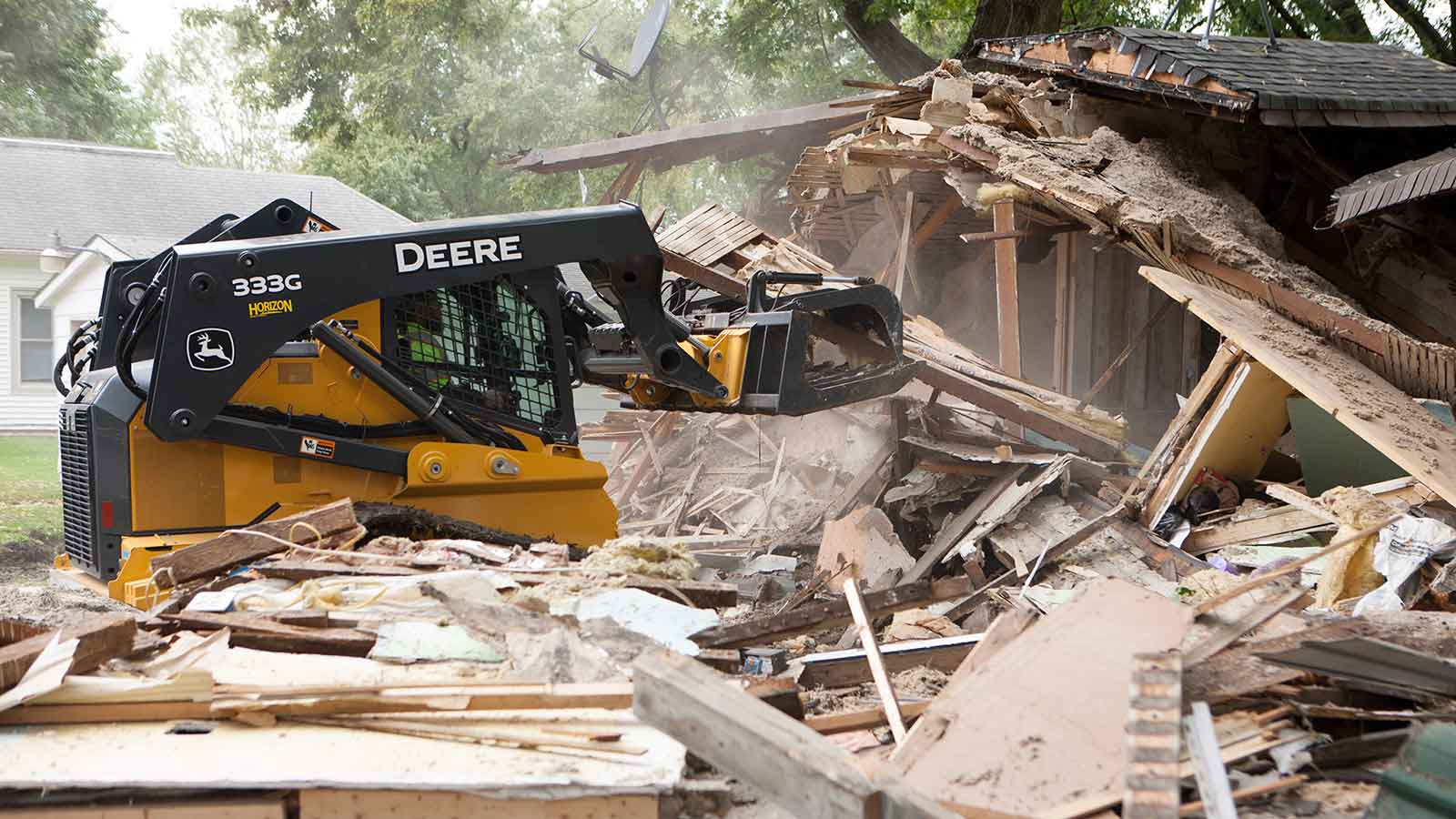 After taking possession of the 333G, Moores took the machine around to the various projects the class is working on. His first stop was the house the class built last year, where he used the 333G to grade the yard in preparation for seeding.

" It's going to be a great machine. I really wanted something with a lot of power and lift capacity, so we can do our own grading and excavating, and move large amounts of material."

Moores also took the machine to a few of the new projects the class started this year, including a house they're remodeling. He used the 333G to quickly load a pile of lathe and plaster into a dumpster.

Moores then took the 333G to the lot where the class will be building a new house. The students stayed a safe distance back as Moores used the 333G to demolish the existing house. After tearing down the structure, he used a scrap grapple borrowed from another contractor to load debris into a dumpster. "I also have access to pallet forks and posthole diggers I can borrow from local contractors. The versatility of the machine is just unbelievable."

AN ATTITUDE OF GRATITUDE

When Moores was first announced as a finalist, Woodbine High School and the surrounding community rallied around him. "It's been very humbling. The community support was incredible. Every day people would tell me they had voted. After the voting closed, I had kids texting me every day, "Did you win?" People got really excited."

On July 10, Moores was announced as the winner at a special event before the John Deere Classic, a PGA Tour® event held in Silvis, Illinois. "Winning the machine was pretty overwhelming and exciting. Definitely a once-in-a-lifetime opportunity for sure."

The next day, Moores got to tour the John Deere Dubuque Works factory where his 333G was manufactured. "I was impressed that everyone was so friendly, and everything was very clean. It blows my mind how many people are involved in making this product. Everything was so interesting — I could have done factory tours for a week!"

Moores is extremely grateful for the opportunity John Deere gave him. "We won something we can use to help do some good around here. We'll be able to use this amazing gift to help keep projects going and costs down. We're going to take this small machine and make a big impact."