Two and a half years ago Danny Raynes and Michael Freeman recognized the demand for data centers and their business shows no signs of slowing down.

The rapid growth of cloud computing has been a huge windfall to Loudoun County, Virginia. In the last decade, approximately 75 data centers have gone up. Almost 70 percent of the world's internet traffic flows through these massive, fortress-like structures. A single data center can house tens of thousands of servers that store, manage, and deliver data for internet search, social media, and e-commerce sites, as well as large banks and other corporations. To get an idea of the power of these data centers, one leading social media site, whose data centers house 30,000 servers, delivers 600,000 photos to users in a single second.*

Danny Raynes, CEO, Benchmark Utility Services, and his partner Michael Freeman, COO, recognized this enormous business opportunity. The two had worked together at a utility construction company for almost three decades. Two-and-a-half years ago, Michael approached Danny about starting their own company. Danny secured financial backing, and in two weeks the new enterprise had a business plan and a license.

With five employees, the company began taking on a few small contracts. Word of mouth began to spread and within three months it landed a multimillion-dollar contract. "Everyone went out into the field to work — owners, secretaries, whatever it took," recalls Michael. "We got the machines we needed, started digging, and began hiring more employees. It just blossomed from there. I'm really proud of those people who stood with me and took the risk. Many left very good jobs." 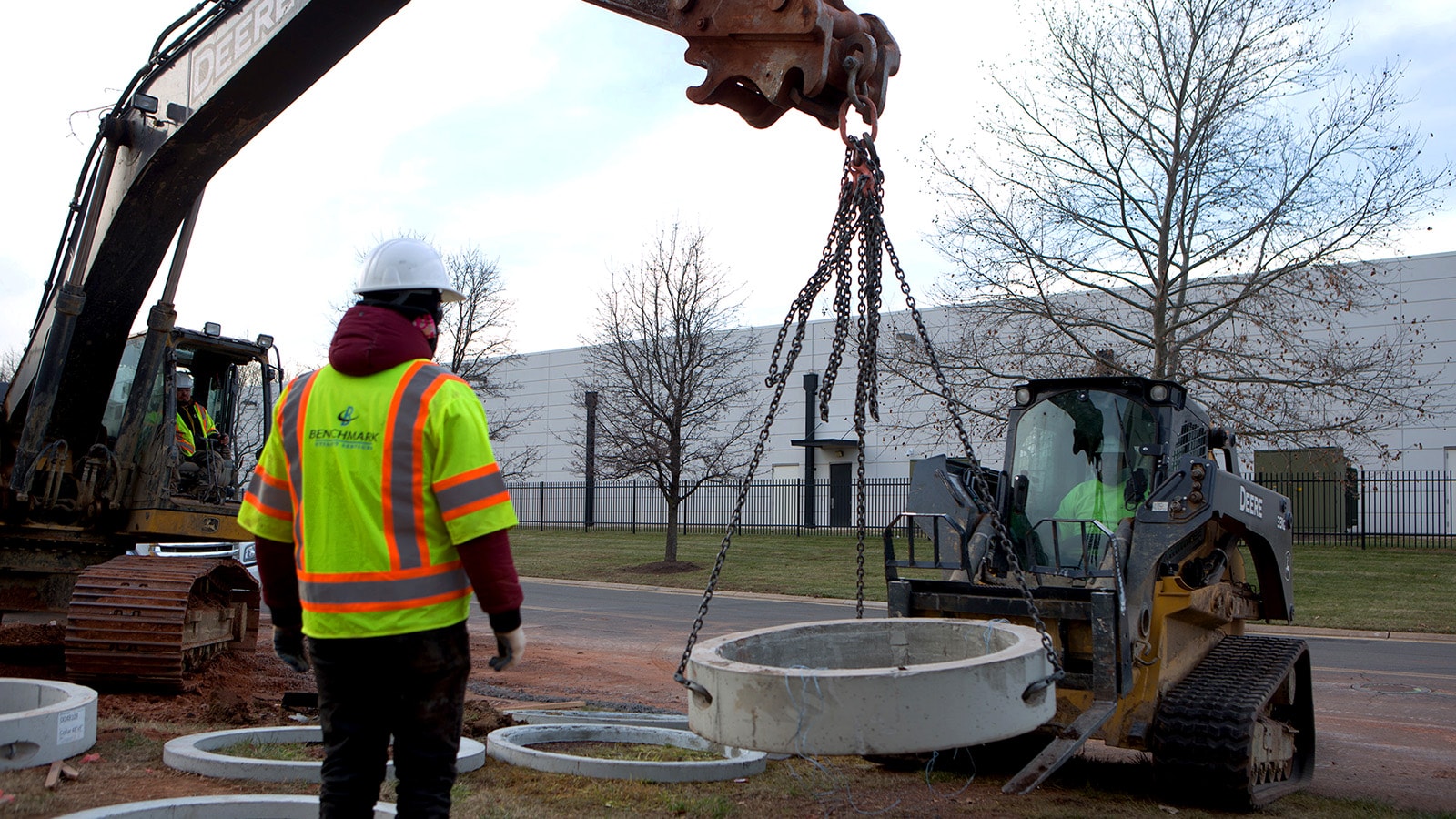 In a short time, Benchmark has grown into a $25-million company with over 20 work crews and 190 employees. In addition to data centers, it also works on new office buildings and hotels. Plus it has a gas utility division that works for Washington Gas™ in Washington, D.C., and a power company group working for Dominion Energy® in Northern Virginia.

Benchmark has worked on 13 buildings at six data center campuses in the past 18 months alone. Each data center project takes a year to a year and a half to complete. The company is responsible for the important work of installing conduits for communications and power for each data center.

"We couldn't do this without the support of John Deere and our dealer, James River Equipment," says Michael. "If I get a call on Thursday about a new job starting on a Monday, I can call James River to tell them we need machines right away. Even if they have to source the machines from stores that are miles away, they'll put them on a lowboy and get them to us by Monday. That's critical because schedules are always tight."

John Deere has been behind the company from the start. "Deere has helped us finance the equipment, and that has really helped us keep up with the fast-paced growth of our business," says Danny. "Lease terms are great, and we also have the option to purchase rental machines. This allows us to obtain equipment with a minimal down payment and put money aside toward a full down payment should we decide to buy."

It gives us peace of mind knowing our equipment will be taken care of at a fixed, predictable cost.

"DATA CENTER" FOR THE FLEET

Benchmark owns 32 John Deere machines, from large excavators down to 35G Compact Excavators, 331G and 333G Compact Track Loaders (CTLs), and 204K Compact Wheel Loaders. It also rents numerous pieces of Deere equipment. At any given time, 50 to 60 Deere machines are on its jobsites.

At a conference room in the company office in Sterling, Virginia, a large TV displays the location of its machines courtesy of the John Deere JDLink™ machine-monitoring system. "We can track fuel usage and idle time, which helps us relocate a machine to a different job to maximize utilization," says Michael. "The system also provides alerts for periodic maintenance or if there is an issue. Our dealer can remotely diagnose a machine and dispatch a technician with the right part the first time without having to make an extra visit."

The company also purchases maintenance contracts with every new machine. "It gives us peace of mind knowing our equipment will be taken care of at a fixed, predictable cost," says Danny. "And if we have any issues, the response from James River is instantaneous. They go above and beyond to keep us up and running."

The combination of reliable machines, easy financing, and exceptional support has been a winner for Benchmark. "I'm really appreciative of what John Deere and James River have done for us," says Michael. "Without them, we would not be as successful."