A Touch of Venice in Chicago 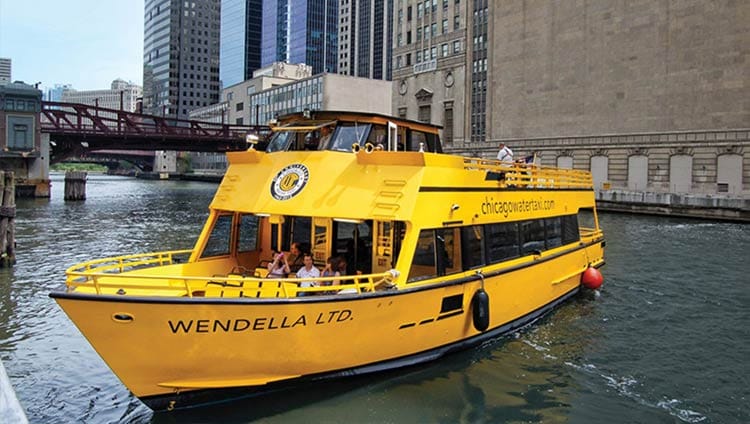 The downtown Chicago area is bustling with traffic, native Chicagoans and tourists all headed from one place to another. Many of these commuters opt to take advantage of the city's many forms of transportation, rather than drive. Among those options are Chicago's water taxis that service the area with a Venetian twist, acting as marine corridors into the heart of the city.

Wendella Sightseeing Company was founded by Swedish immigrant Albert Borgström in 1935. Today, the third-generation company has seen the importance of its water taxi service grow along with the size of this sprawling metropolis. With a population approaching 3 million, Chicago ranks as the third-largest city in the United States. When you add in the population of its suburbs, there are about 9.5 million people who call the region home.

"We haul over 360,000 commuters a year, and that number continues to grow," says Andrew Sargis, chief of operations. "Every one of the last 10 years has been a record year."

Wendella has four taxis in operation, and the 20-meter (66-foot) Wendella Limited is the largest of the fleet. U.S. Coast Guard–approved for 100 passengers, the vessel typically operates at full capacity during the rush hours.

The 15-minute ride on the Wendella Limited is more pleasurable than ever these days. The tour boat company overhauled the 1962 vessel and replaced the engines with a new set of John Deere PowerTech 9.0L Tier 3 engines.

"The engines are far quieter than what we had before, and our commuters appreciate that. The city itself also benefits from fewer emissions and particulate matter," says Sargis.

However, removing the old engines was no easy task. Wendella hired Burger Boat Company in Manitowoc, Wisconsin, to remove the aluminum deck plates from the upper and lower decks. New engine beds were built, and new vents were added to the stern to prepare the vessel for the new PowerTech 9.0L engines.

With a first full season on the job, Sargis says he's impressed with the engines' torque and responsiveness — characteristics that are more important to him than speed.

"The river is a no-wake zone. We are only traveling 8 knots tops, but we need to be very agile and extremely responsive. On the river, we have kayakers, recreational traffic, tour boats, and material barges. Sometimes we need to stop and reverse on a dime and parallel park these boats between other boats."

He's also seeing improvements in fuel economy. "We used to use 1,700 gallons (6,435 liters) a week during the peak of the summer. Now we average 1,400 gallons (5,300 liters) a week, and we are running four more hours a day and the route is now more rigorous. It’s translating into huge savings in both fuel and emissions."

Sargis says he plans to repower a second vessel, Sunliner, with a pair of John Deere engines as well. Maintaining consistency is at the forefront of the company's concern to make the boats and propulsion system as similar as possible.

"We have new engines on order and will install them this year. Now that we have experienced John Deere engines, we will stick with them."

The river is a no-wake zone. We are only traveling 8 knots tops, but we need to be very agile and extremely responsive.