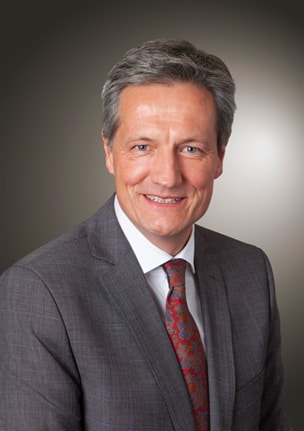 Mark von Pentz is President, Worldwide Agriculture & Turf Division: Europe, CIS, Asia, Africa, Global Tractor and Hay & Forage Platforms, and Advanced Engineering, a position he's held since January 2019. von Pentz is responsible for the customer-focused sales and marketing regions of Europe, CIS, Asia, and Africa, and operations for the Tractor and Hay & Forage Product Platforms. He also has responsibility for the advanced technology and engineering organization.

von Pentz began his career with John Deere as an internal auditor in the European office in 1990. He held a number of positions of increasing responsibility in the Agricultural Division's product and marketing organizations in Europe. In 1999, he was named General Manager of John Deere International GmbH Switzerland. In 2003 Mark was appointed Director, Market Development for the United States and Canada, and two years later was named Vice President for Agricultural Marketing for the region. In 2006, Mark returned to Europe and was named Senior Vice President, Marketing & Product Support – Europe, Africa, and the Middle East.