John Deere Power Systems (JDPS) and its distributors took Power Lunch-branded food trucks “to the streets” to thank OEM customers in the U.S.,Canada, and Italy for their long-term trust and loyalty. More than 600 employees enjoyed tacos, bombette and heartfelt conversations.

During the pandemic, JDPS missed connecting with its customers personally in meetings and at shows. The food trucks offered a creative way to reconnect and show customers how much JDPS cares. JDPS invited distributors in the U.S. and Canada to join the effort and identify OEM customers to create a route for the Power Lunch tour.

U.S. and Canada: Ready to ‘Guac and Roll’

The event started small-scale, but as everything began to take shape, it snowballed, or maybe “guac-balled”! The tour map expanded with more customers and more countries.

Two food trucks were rebranded “JDPS Power Lunch” and scheduled to visit eight customers in the U.S. and six in Canada.

A delegation from the distributor kicked off each event and mingled with employees while they enjoyed chicken, beef, and veggie tacos. 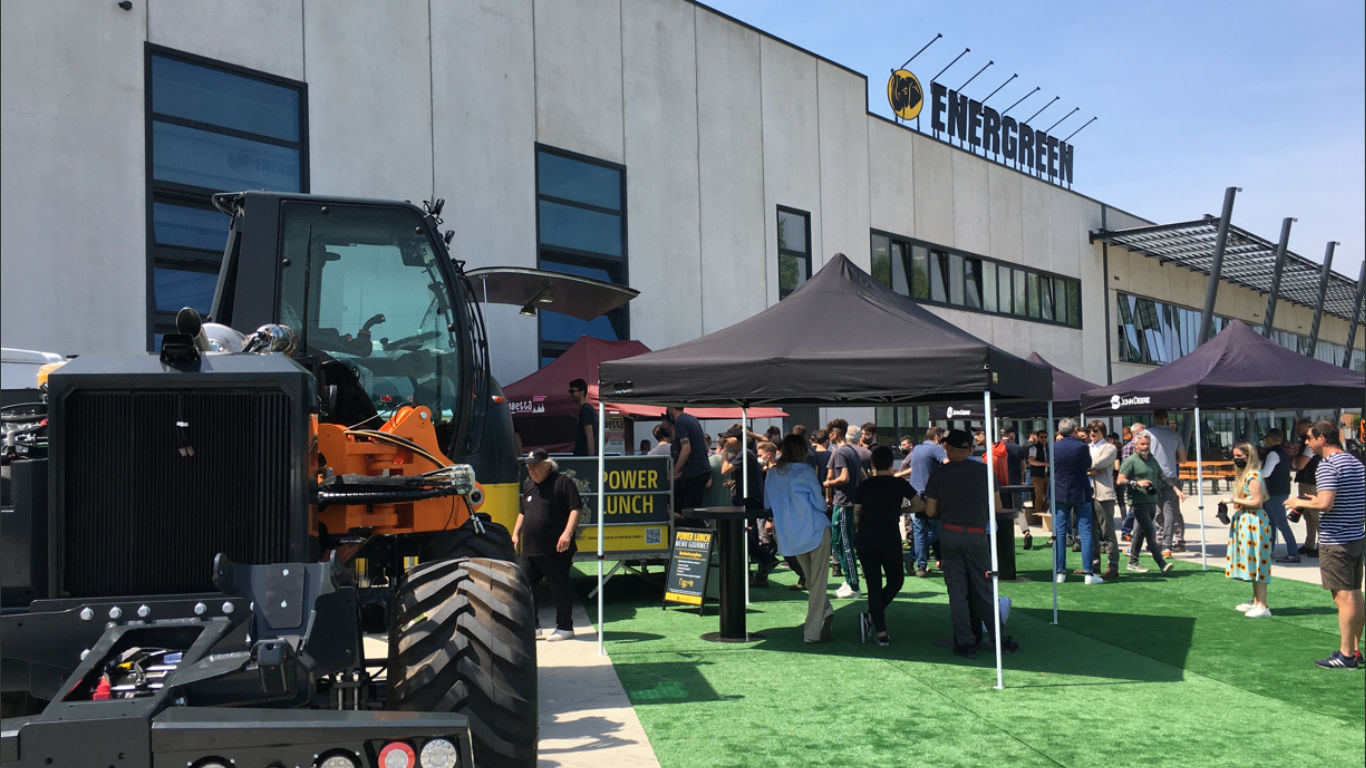 For Northstar Power LLC in Ankeny, Iowa, taking part in the event was self-evident. "Who doesn’t like free food?" said Troy Kaney, vice president and sales manager. "And how often do you get the opportunity to say 'thank you' to customers and connect in such a fun way?"

The food truck dropped in on Puck Enterprises in Manning, Iowa, and Pivot Power in Sioux Falls, South Dakota. "We hadn’t delivered to Puck in a while, for instance, but we go back decades. So, this was a great, non-intrusive way to get back in touch," Kaney said.

Jay Canada, vice president of sales and engineering at Industrial Irrigation Services in Hastings, Nebraska, took part because "it was great timing, with life opening up after the pandemic."

"This 'off the wall' concept allowed us to connect with them, without the usual sales pressure," Canada said. The food truck also called on Broce Broom and Superior Broom, both in Kansas.  Julia Travassos, marketing specialist at distributor Diesel-Bec in Boisbriand, Canada, loved the all-inclusive aspect of bringing the food trucks to customers UTV International and CMI Mulching Inc. "Usually, we only get to meet the CEO, purchasing manager, or engineers. But now we could chat with people from admin, finance, assembly — everyone and anyone. And after the event, our team got together with CMI’s team to discuss using John Deere engines in a new machine development." 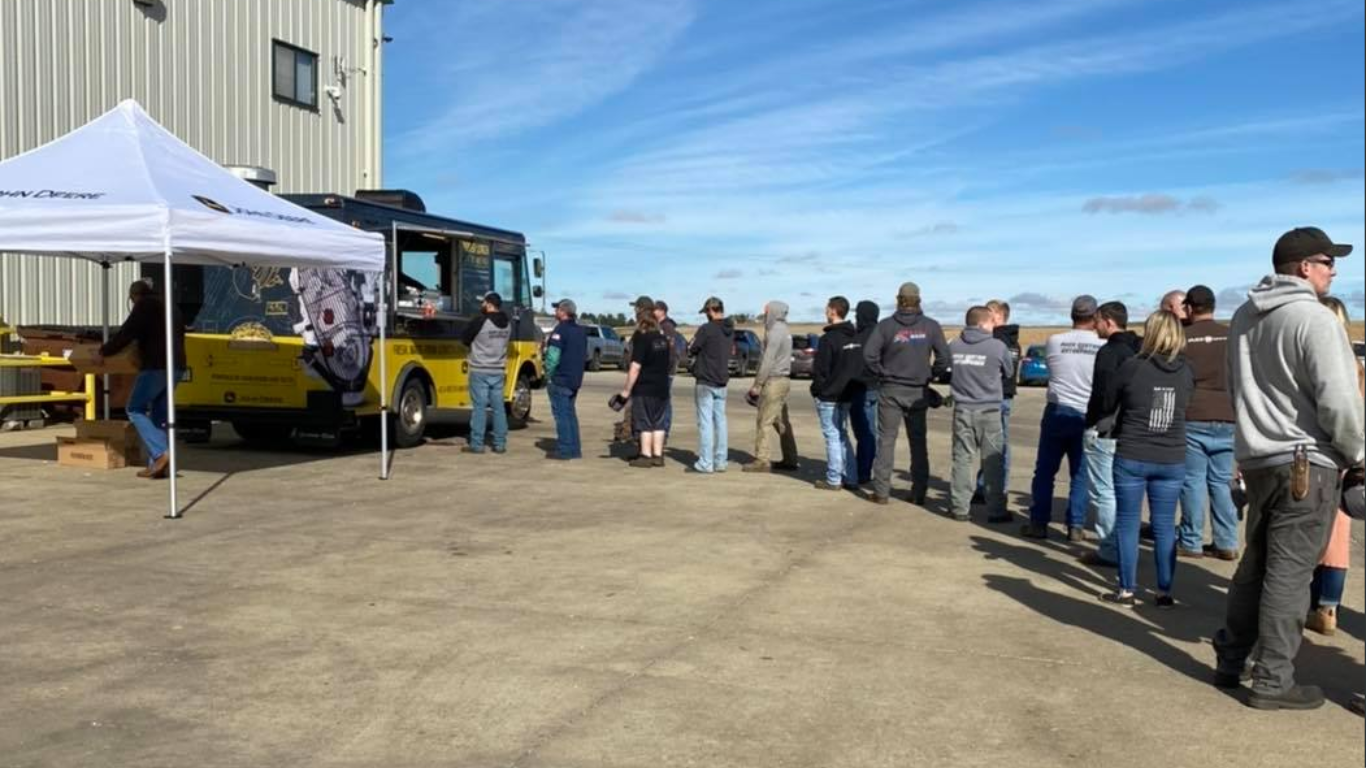 The OEMs and their employees were extremely appreciative of the gesture. “They recognized the efforts JDPS had made, in terms of people and budget,” said Kaney, of Northstar Power. “And they loved the food.”

The customers shared their enthusiasm on social media. UTV International in Montreal, Canada, posted on its Facebook page: “What a treat on a nice sunny day! It was a pleasure having the John Deere Food Truck come by for lunch today, courtesy of Diesel-Bec. Thank you for the delicious tacos!”

Italy: Bombette are the ‘bomb’

The Italian OEMs gave a warm welcome to the distributor and John Deere teams. Some set up a designated picnic area with tables and chairs and a lineup of John Deere-powered equipment, showing the close collaboration between the brands. In the unpredictable May weather, the free John Deere hats came in particularly handy, for sun or rain. Employees also enjoyed a fun John Deere trivia with prizes

Rama Motori from Reggio Emilia gladly signed up for the food truck initiative. “We’ve always made it a priority to understand what our customers need to be successful, and we’ve seen many of them grow consistently over the past decade,” said Enrico Menozzi, product manager. “We’re grateful for their trust and loyalty, so when JDPS Saran suggested the food truck tour, we were in immediately!”

The distributors agree: more lunch tours! While it started as a small-scale trial in the U.S. and Canada, calls are coming in from distributors to organize another one soon. “This is such a creative, unique way to reconnect and thank customers, and hear what they’re up to in a more relaxed setting,” said Canada, of Industrial Irrigation Services. “Our customers loved it. They get to see John Deere from a different angle and have a fun break in their day. For John Deere and for us, it’s a great differentiator. I haven’t seen any other brands do anything like this. It shows how JDPS and its distributors are working closely together to build solid relationships with customers.”