FROM HEARTBREAK TO HOPE: ONE FAMILY’S STORY OF BUILDING AN AMERICAN DREAM

Sonjalim “Aminou” Alabani with his wife and son

A man who escaped an oppressive regime and traveled halfway around the world in hopes of building a better life long imagined how this moment might feel.

As Sonjalim "Aminou" Alabani watched a steel shovel blade pierce the earth, exposing the rich Midwestern soil underneath, he couldn't help but think that the American dream was, at last, here.

From West Africa to East Moline

Togo, for its diminutive size, is gifted with extraordinary geography. There are sandy Atlantic Ocean beaches, gently rolling savanna, and rugged mountain ranges.

"When you live in a dictatorship, you don't have peace and you don't have freedom of speech," Alabani said. "You cannot even say a word that will displease someone because your family might not see you anymore. They might take you away. It's scary.

Alabani visited the U.S. Embassy in the capital city of Lomé in 2005 and applied for a visa, which he received a few months later. The decision to leave wasn't easy. It meant saying goodbye to his nine siblings, the family's sugar cane farm, and the only home he'd ever known.

Today, his roots are planted firmly in East Moline, Illinois. He has a wife, three children, and works in the maintenance department at the local Tyson Foods plant.

"Oh, she was very happy. Very happy. She was always running through the house and loved to jump on me when I got home from work," Alabani recalls. "But then, when she was around a year old, suddenly everything changed. She would wake up at night, stand in her crib, cry, and call our names. We thought, at the time, that she was hungry. We took her to the doctor, they did tests, but couldn't find anything."

The suffering, and the testing, continued. Then one day, Kamila developed a high fever and was having trouble breathing. She was transported by helicopter to OSF Children's Hospital in Peoria, Illinois, and was diagnosed with Leigh's disease, a rare inherited neurometabolic disorder that affects the central nervous system.

"After surgery, she couldn't move her legs and doctors told us she'd never walk again," Alabani said. "It was so sad to see your daughter, who used to run around, sitting in a wheelchair."

Friends and relatives rushed to help and soon their modest two-bedroom apartment was overcrowded. So Alabani applied for a home with Habitat for Humanity and, after a two-year wait, was selected.

The family who struggled mightily to make ends meet while providing around-the-clock care for a daughter whose future was, at best, uncertain, had finally caught a break.

"I do whatever needs to be done including framing, building stairs, hanging drywall, mounting kitchen cabinets and bath vanities, and painting – even though painting isn't one of my favorite jobs," explains Don Landphair. "The biggest reason I volunteer for Habitat for Humanity is the great mission of helping to provide affordable home ownership. Habitat provides a "hand up" not a "hand out."

No one is forcing Landphair to don a hard hat, safety glasses, and gloves. He doesn't have to perform labor-intensive work more suited for folks half his age. But the Deere retiree who spent 32 years managing product development for the company's global planter line feels a calling to help those who need it.

"I'm getting to know Aminou and his wife Aissatou, and they're great people," he said. "Their story is a big reason why I support Habitat both financially and by volunteering. The organization can make a permanent and significant change in people's lives and truly breaks the cycle of poverty. It gives me great satisfaction to help build a nice house."

Construction on the Alabani home is nearing completion. Aminou and family have given hundreds of hours of sweat equity and the comforting sense of stability they've long sought is almost here.

But when the roof is done, appliances are installed, and keys are in hand, the tough work begins.

Shortly after the official groundbreaking ceremony on August 29, Alabani went home and took a nap. "When I woke up," he recalled, "my little sister said Kamila's face was changing."

"They rushed Kamila to the hospital," said Alabani, softly. "They tried to help her, but her oxygen was still at 50-percent."

At an age when most kids are watching cartoons and laughing with friends, Kamila was struggling to breathe. She fought valiantly with all the strength and courage her little body could muster. Mom and dad and her three siblings adored her from the time she opened her tiny eyes to the moment she closed them forever.

"She always knew the time I'd eat, so we'd put her in her chair facing the TV and I'd be facing the table. She'd say Daddy, you're eating without me?" Alabani recalls. "The one thing I miss most, though, is playing with her. Kamila and her brother used to jump on me after I came home from work. I started doing that again with our little ones, but every time I do that it reminds me of her."

The unimaginable pain of losing a child will never subside. But life, as cruel as it may sound, must go on. Aminou is still working third shift at Tyson Foods and Aissatou is still working at a healthcare facility while studying to become a registered nurse. The family is looking forward to a new beginning with a new house that offers more space, more features, and more opportunity.

The most important project, however, remains unfinished.

"Once we move in, we're going to have a special place," Alabani said. "It's going to be for Kamila, and we're going to go there all the time and pray for her." 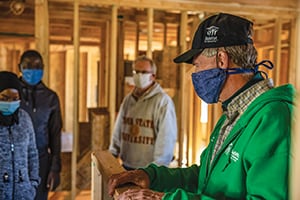 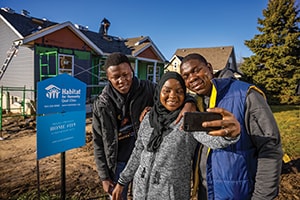 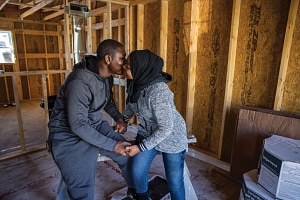