THE ELY FAMILY’S FIGHT TO KEEP THEIR LAND

Joe Ely would be proud. Proud that after 80 years his family still owns the farm in tiny Barlow Bend, Alabama that he and his wife Pearlie bought in 1941 and worked so hard to build. Holding onto the land though hasn't been easy for his children and grandchildren. They've faced a legal battle with someone who bought a share of the property after one of Joe Ely's 15 children died.

These descendants, who no longer live in the area and have no connection to the farm, received an unsolicited letter inquiring about the property, Michael Robinson, one of Joe Ely's grandchildren, explained.

"They felt like it was just a check that they got, they could sign it over," Robinson said of his relatives. "They had no idea the ramifications it would create."

The rest of the family didn't know some of their heirs' rights to the property had been sold. "When we found out about it, it was by way of a lawsuit from the gentleman who purchased the interest and he said that he had the intent to buy all of the land," Robinson said.

Without clear and documented title, Black farmers are unable to use their property as collateral to secure loans or credit to further develop their businesses. They're often precluded from government programs and other forms of emergency or disaster relief.

"That has just been devastating to the plans that our grandparents had for this land," said Dr. Debra Ely, another grandchild.

The LEAP Coalition, which includes John Deere, Thurgood Marshall College Fund (TMCF) and National Black Growers Council, is helping Black farming families like the Elys retain their land by partnering with The Federation of Southern Cooperatives, which provides the families with technical assistance and legal support.

As part of these efforts, John Deere and TMCF are supporting the Federation of Southern Cooperatives/Land Assistance Fund's legal internship program, by providing law students who will work with families, including the Elys, to help identify and preserve Heirs' Property in rural Black communities.

Joe Ely had little farming experience before moving his young family across the state to start their new farm. He'd purchased over 100 acres along the Alabama River — one-fifth of a former plantation — through a federal loan program designed to drive cotton production. The Elys built their farm on their own from the ground up —a farmhouse, barn, numerous crops, livestock, an orchard, sugarcane press and more. They and their children worked long hours to ensure they repaid their loan and grew the farm.

"Cotton was the basis for the loan to be repaid," recalled Veria Ely, one of the Ely's children. "Dad had to keep meticulous records. It was amazing to know my parents who probably didn't have a fourth or fifth grade education were able to meet this loan agreement. My grandparents were farmers but didn't have much land. My parents didn't have much experience to carry out these activities. It's mind blowing to know how he was able to get a handle on it."

The Ely's both passed away while relatively young. Joe first then Pearlie. Some of the children stayed in the area while others moved away, scattering across much of the country to start careers and raise families.

The family has never forgotten or abandoned the farm though. Over 100 of the Ely's descendants return each year for a reunion. They gather at the original farmhouse for cookouts, sharing laughter as they recall fond memories of working and playing on the farm as well as family visits over the years.

The Ely's grandchildren also still farm the land. Two grandchildren, Derric Jackson and Michael Peoples, who both live near the farm, have grown hay and beans in recent years to help sustain the property. They purchased a John Deere 4044M with a 400 series front loader two years ago to help with their operation.

Plans for the future

Freddie Davis, a representative from the Federation of Southern Cooperatives, is now counseling the family on how best to generate revenue from the land. He recently met with them at the farm to understand their objectives for the land and to offer recommendations.

"They were interested in understanding the resources available on this property in order to make it sustainable," Davis said.

He met the family through a conference in December designed to help heirs' property owners. The Elys want to make sure they keep the property in the family and carry through on Joe Ely's original vision for the land.

"I think that my grandparents would be proud to know that their children raised their children the same way that they did and that we were able to enjoy the land," Debra Ely said. 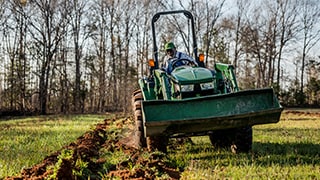 Learn more about the LEAP Coalition

News release announcing the formation of the LEAP Coalition

More information on how LEAP is addressing Heirs’ Property rights