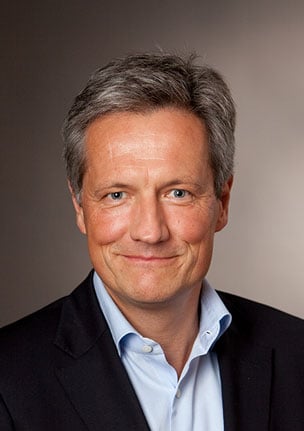 Mark von Pentz is President, Worldwide Agriculture & Turf Division, Small Ag and Turf, responsible for the European, CIS, Asian, and African markets as well as for the equipment solutions that provide value to small ag and turf care customers. He was named to the role in June 2020.

A champion for the ag producer, von Pentz has served as a president of Deere's Ag & Turf business for more than a dozen years, with market responsibilities spanning the globe (Europe, CIS, Africa, Asia, and South America) and product-line responsibilities that have included every ag equipment product line.

Under von Pentz's leadership, the company overhauled its flagship tractor product line. These advancements have earned the company accolades from both engineering organizations and high-tech communities. In 2019, the German agricultural society DLG awarded its only gold medal to John Deere at its biennial AGRITECHNICA show, the ag industry's leading trade show for technology and innovation.

A graduate of Hamburg University, von Pentz has an advanced degree in business administration.