Elected to Deere & Company Board of Directors, 2015
Retired United States Senator from Nebraska and former U.S. Secretary of Agriculture 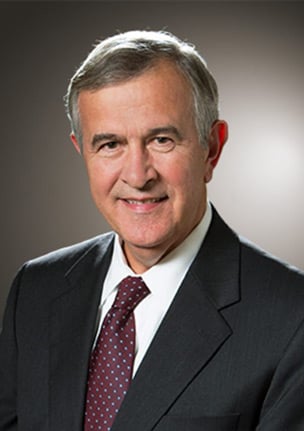 Michael O. Johanns is retired from the United States Senate, where he served as a Senator from Nebraska from 2009 until 2015. In the 111th-113th Congresses, his committee assignments included Agriculture, Appropriations, Banking, Commerce, Veterans Affairs, Indian Affairs, and Environment & Public Works.

Prior to his term in the U.S. Senate, Johanns was the United States Secretary of Agriculture from 2005 until 2007. He was twice elected Governor of Nebraska, 1999-2005, and in 2002 he chaired the Midwestern Governors Association. Johanns served two terms as Mayor of Lincoln, Neb., from 1991 to 1998, and he served on the Lincoln City Council from 1989 to 1991. He served on the Lancaster County, Nebraska - County Board of Commissioners from 1983 to 1987, including a year as chair. After serving as a Judicial Law Clerk for Nebraska Supreme Court Justice Hale McCown from 1974 to 1975, he practiced law with private firms in Nebraska until 1991.

In addition to serving on the Deere & Company board, Johanns is a member of the Advisory Committee of the Agriculture Division of DowDuPont, Corteva.

Johanns earned his B.A. from Saint Mary's University of Minnesota in Winona, Minn., and his J.D. from Creighton University School of Law in Omaha, Neb. In February 2016, his Presidential nomination as a new board member of the Millennium Challenge Corporation, a bilateral United States foreign aid agency, was confirmed by the United States Senate.

Deere & Company (www.JohnDeere.com) is a world leader in providing advanced products, technology and services for customers whose work is revolutionizing agriculture and construction - those who cultivate, harvest, transform, enrich and build upon the land to meet the world's increasing need for food, fuel, shelter and infrastructure.