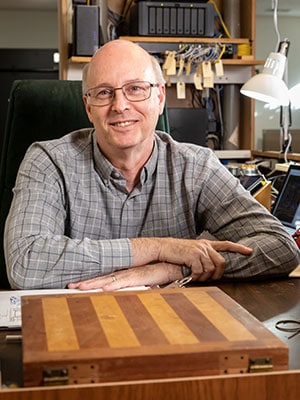 Curious as a child and "still curious as an adult," Dave Smart continues to find wonder at the intersection of technology and possibility.

The word milestone comes with two definitions and Dave Smart has utilized them both about as well as one could ever hope.

Growing up the word provided guidance, symbolic markers of where his curious mind would take him. These adventures could be measured in miles or musings.

At age 6 he began tinkering with a spare reel mower motor to best understand how it worked. This would lead to his two older brothers and him figuring out how to keep the throttle stuck open so the self-propelled mower could "drive" on its own. The purpose? "We would play tag with it," Smart said.

This, of course, begs for further information. When pressed about the safety of such a game, Smart delivered this defense: "Well, it wasn't real fast. It was erratic though. It's just how I found entertainment."

He sits for a moment, reflecting in the memory. Smart's personality is purposeful with equal doses of humility and dry humor. When talking about the unmanned reel mower tag game he thinks out loud, asking himself all these years later, "Yeah, where was my mom?"

Day by day, year by year

When Smart was 7, he used one of his nine lives to gain an understanding about electricity. His dad, Dean, had an extension cord with a socket at the end. You could screw a light bulb into it or a two-pronged adapter.  To the boy, it was magical. He asked his father what would happen if he stuck his thumb into the socket. With the right amount of coaxing he would find out.

At age 8 he figured out how to bypass his minibike's speed regulator by simply pushing in the right spots while riding it. Hours spent "tuning it up" allowed him to explore the minibike's anatomy.

So, when age 9 rolled around you could say Smart was a seasoned veteran at the art of the unknown. He loved getting out on his bike, a rolling transport of independence.

Here his milestones were a little different: a golf course, cemetery, and the swimming pool; a school, a friend's house, and the park. These were locations he needed to pay attention to so he could maneuver his BMX bike — with sack lunch strapped to the white banana seat — throughout his hometown of Waterloo, Iowa.

They were important. Afterall, these landmarks would not only push him forward but bring him home.

It wasn't until he stumbled across his father's machining business — nearly 4 miles from home — did he fully understand the power of his pedaling.

It was an unannounced and unimagined discovery. "I got to hang out with my dad and watch some of the equipment at the machining shop run. And, he let me play with all the tools." In an interesting twist, the shop was located on land that now is part of the John Deere Foundry.

Rarely are the "formative years" taken so seriously.

His insatiable curiosity was fostered, in large part, by his dad. With the family garage providing just enough space and spare parts, Smart's dad found the right balance to feed his son's inquisitiveness.

"We would horse around in the garage and do little projects that lasted a couple of days," Smart said. "The itch was scratched."

"He would bring home time delay relays and panels, switches, and knobs and challenge me to wire them up," Smart said. By now, he's 16.

These projects were heady stuff. Absent of schematics, his father would provide verbal commands of what needed to be done. "That mystified me how we figured this out," he said.

If we're getting technical, these are the moments — the milestones — that point to a future of promise. It was in this time his education was being built. It will go a long way in explaining how Smart exceled at local Hawkeye Tech (now a community college) when he should have been a senior in high school and flourished beyond that without ever getting a four-year degree.

It was at Hawkeye Tech that Smart saw his first microprocessor, a brick-sized piece of electronics that taught him about writing code. As a student he could bring the device home, flipping switches, creating combinations, and working toward results.

This is not an Xbox or PlayStation. These were sets of individual red LED lights that would come on and turn off at his command. Once he could hook the microprocessor to a keyboard and the family TV his life changed.

He would spend weekends in the living room, sitting on the green nappy carpet "ruining his posture" by being hunched over and interacting with the device.

Sure, there would be the occasional query from his parents. "When can we get the TV back?" "Are you about done in here?" But, by and large, the environment fostered his learning and his passion. 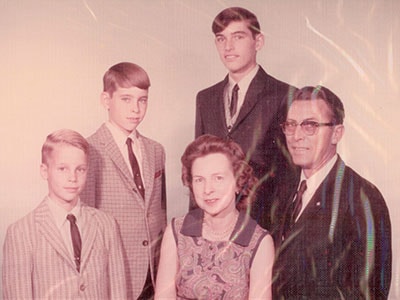 Dave Smart, lower left, with his family in this 1960s-era photo: His mom, Violet, and dad, Dean, along with brothers Alan and Kenneth.

Months later, on a windy January night, Smart was in his bedroom having just watched "The Tonight Show" with his dad. As his father readied for bed he collapsed. Smart's mother, Violet, yelled out. The youngest of three boys, Smart ran to his parents' bedroom. His brothers — three and six years older — no longer lived at home.

In shock, he dialed the operator.

"I recall my voice was trembling so much I hoped she could understand me," he said. "When the ambulance arrived, I remember one of the guys saying, 'I think it's his heart ma'am.'"

His dad would not recover.

"I struggled with the loss of Dad. And it lasted long after the first days and weeks," Smart said. "I guess I was probably an average student until his death, then backslid a bit from there."

His mom never had a driver's license. She would either walk to the store or take the bus. Smart admitted that after his father's death his mother relied more and more on her youngest son.

"She became more dependent on me than I wanted to accept," he said.

Smart's life was taking shape, finding his calling at Hawkeye Tech and making friends. But his mom needed him, applying the brakes and guilt in equal measure.

"I didn't handle that well," he said.

And now the hard part.

He finished the Electronic Engineering Technology program before his 19th birthday when the average age of graduates was about 24. His life back on track, this achievement showcased his abilities while also proving to be a hindrance. At a career fair, few were interested in hiring such a young kid, let alone for the skill in what he had grown to love.

His first job was in "the middle of nowhere Nebraska. Mile marker 248," he said. He stayed in the "dead-end job" for less than a year. Then, off to Chicago and if his new employer had allowed him to do what they said in their hiring pitch he may never have ended up at John Deere. But, they didn't.

"Then the rubber band started pulling again and I came back to Waterloo. Back home."

Smart often labels his formal education as "non-traditional" and even assesses his scholastic achievements as "average." His accomplishments for John Deere — after 41 years — were anything but. He often found himself learning new technologies without supporting documentation or guideposts — milestones — to help show the way.

He started in tractor electronics and his speed and proficiency in software development quickly set him apart — creating the "embedded software" in many displays and controllers. Then, in the mid-1990s, three colleagues and Smart were picked to salvage a special project that had been underway for 18 months with nothing to show for it. The newly formed team was tasked with picking up the pieces of a new software architecture for the largest loader of the day. They were given four months.

With a young family at home, Smart commuted to Dubuque, Iowa, and back each day, about 200 miles round trip.

The finished product would eventually get an official name — the John Deere Operating System. It would become one of the most significant advancements in the company's history. Its DNA, the architecture and implementation, resides across divisions and throughout numerous product lines.

"You know," Smart said, his voice and pitch increasing. "It just ended up being in the arm rest and displays, and transmissions and hitches, and hydraulic controls, and planters, and sprayers, and balers. You know, it just went pretty much everywhere from there."

Then it was five years in "a little group called Precision Farming" — the forerunner to what is now Deere's Intelligent Solutions Group (ISG). This is where Smart became deeply immersed into the world of international standards for ag electronics, and a technology known as "ISOBUS."

In July 2020, Smart retired as a senior staff engineer in the Enterprise Electronics Group. It's nearly impossible to write a sentence about Smart's time at Deere without using the word "developed," because that's what he did, honed by all those years of asking himself a simple one-word question: "How?"

Over his more than four decades, Smart developed:

Plenty to be proud of

As Smart thinks of the Fellows Award it's not lost on him that his path is not your typical paved way forward. He mentions his education again — the formal kind, not the thumb-in-the-socket kind. Setting his humility aside, he laughs as he compares himself to his 2020 class of Fellows winners.

A pause settles now. It's rare to discuss a career that is now complete. And accomplished.

He continues, with a point to make.

"But I've worked hard to get here. I worked really hard to gain the skill and the expertise in the things I'm good at. But certainly, the crowning achievement is the Fellows Award," he said leaning back, perhaps satisfied.

Quite the milestone indeed.