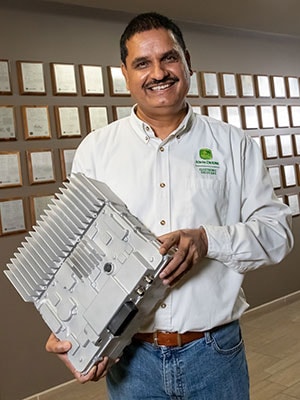 Singh shows a prototype inverter as its variant was used for technology demonstration on Deere hybrid loader. Singh is standing in front of ISG Fargo's impressive wall of patents.

He was born in Shapur Charki, a meandering village of 250 people where both homes and roads are carved from the earth. There was no electricity, which will end up proving to be ironic, and no running water. Farming was done by hand, with backs bent and no tractor in sight.

His stimulation came by way of independence.

His father was gone most days, working as a teacher in a neighboring district. His mother ran the family farm, 25 acres of land that can be traced back more than 650 years. So, when Singh talks about being independent, thinking for himself, and overcoming adversity he can point to all of this as evidence.

"In India, when you can walk, you're pretty much on your own," he said.

Singh's an animated storyteller with his arms and hands rarely at his side, smiling through most memories as his story unfolds.

And when you're left to your own devices, that story starts early.

With his mother unable to watch after him — either in patience or practice — it was decided he should get a head start on his education. At age 3.

Almost every aspect of Singh's personal timeline is dotted by education — clearly his motivation. Kindergarten at 3, first grade at 4 (when he called his studies "soft"), and high school in the city at 12.

There is a term Singh uses to signify his standing in a class of his peers or the score on an exam: "topper." At first it sounds unique, but by the end he's used it so often that you find yourself using it, too.

Much was asked of him in these early stages. He was responsible for getting himself up each morning, bathing, putting together his breakfast, and getting off to school. He would walk to a neighboring village in the Uttar Pradesh province where a large shade tree served as the school for kindergarten through fifth grade students.

At night, when it was time for homework, he would drag a small rug to an open spot on his home's dirt floor, carrying a kerosene lamp, and tackle his schoolwork.

"My mom, she was very strict," he said. "She would say to me, 'You basically have nothing else to do but study.' So, I studied. But she could only write her name. She could not read, so she wasn't able to help me."

He then recalls his mom's vision for her middle son. "She sometimes tells me that 'all I thought was that you would become a clerk and live with us,' or maybe a schoolteacher, she would say, and live with us. Don't go away."

All Singh wanted to do — eventually — was go away. It's not that he sought a home with carpeting or running water. It's that he wanted more opportunities to learn.

To say Singh didn't have guidance is unfair. On the nights his dad, Heera Lal Singh, could make it home he would find the right moments to explain to his son how his life should be formed.

"He would tell me, 'Don't lie, work hard, be kind, have a good attitude, help people, never do anything unfair, and live within your means." He would then end with this: "Never do anything that I feel ashamed of."

In eighth grade Singh's principal asked who was interested in taking the Akikrat exam. This was the test that would open the doors he was prepared to walk through. The ambitious student didn't hesitate. He simulates that moment, raising his hand, saying, "Me. I want to do it." He laughs at the reenactment and the opportunity.

The exam included children from multiple districts made up from multiple villages, about 10,000 students in all. The result was no surprise. "I was topper," Singh said.

The accomplishment would take him to Kanpur, a city of nearly 3 million people. If he wanted out of the village, this certainly would do. And, as one might guess, Singh would take this journey on his own.

School and learning began in July, but Singh and several of his district classmates could not arrive until October because of a delay in announcing the Akikrat results. He was already behind and within a couple of weeks the first test was given.

Then, a moment of clarity.

"You can imagine the competition," Singh said. "Your competition is with those kids who are bright."

He would get the top score.

Even though Singh's confidence soared, he felt the weight of isolation and homesickness. "I went outside, under a tree," he said quietly, the smile gone for a moment. "I would weep," he said. "I was missing my family. It was a lot. But never once did I think I wanted to leave and go home."

If there is one thing that strengthens a family foundation it is resolve.

During a 2014 visit to his village Singh sits next to his father, Heera Lal, in a striped sweater. To the right is his grand uncle, Ram Singh. His older brother, Hari, is seated at the far left.

After high school there was pressure from family to earn an undergraduate degree and take an exam that would get him an administrative service job — like a government officer.

After getting his engineering degree the pressure hadn't faded.

But Singh's a good son. He took public sector and engineering service exams and passed. Now, numerous jobs opened for him. Again, family and friends implored him to take one.

At one point his father asked him what's the highest degree his son could achieve, maybe trying to figure out just how long his son intended to stay in school. "I tell him Ph.D. He says, 'Go for it.' That's all I needed," Singh said.

The boy who carried a kerosene lamp around his home would choose electrical engineering as his major field of study because his uncle told him it involved physics, a subject Singh excelled in.

He would get his master's degree from Roorkee University and then pursue his doctorate, honoring the pledge to his father. He would enroll at Indian Institute of Technology Delhi, the country's premier engineering school.

Singh experienced both highs and lows at IIT. His exposure to committed professors encapsulated the values preached by his father. "They did so much for their students," Singh said with heartfelt admiration. "It made me want to be a professor, too."

His Ph.D. pursuit brought doubt for the first time in Singh's educational climb. He was not getting the results he'd grown so accustomed to. He uses the word "rejected" in describing both lab and written research.

"I felt some low moments," he said. "I was sending out research papers and they were getting rejected. Then you feel like, 'What am I'm doing here?' But then when you're attached to your purpose, I probably will make my dad very proud and family very proud, so I should work harder and get it, achieve it."

The program required seven published research papers, which had to be completed within seven years. Singh was now driven to outpace both standards. He worked tirelessly to close his knowledge gap, reading and re-reading hundreds of research papers. He finished the program in less than four years having published 16 research papers — more than double the requirement in nearly half the time.

Jobs lined up, but we've read this story before — Singh wasn't quite ready. He left India, the first from his family to do so, and went to Montreal, Canada, for further research on his vector-controlled induction motor drive. Despite his mother's vision, he would not be a store clerk.

He would then take a job in the United States at Tulane University in New Orleans, Louisiana. He was an assistant professor in the Department of Electrical Engineering and Computer Science. Five years later, in late August of 2005, Hurricane Katrina would hit the Gulf Coast, its devastation closing Tulane temporarily.

His work drew attention and praise. He was becoming known as an expert in the field of power electronics. In 2006 John Deere came calling. True to form, Singh declined. He had two conflicts. The first, his commitment to students deep into research work. Second, he had a six-week vacation planned back to India, something he tries to do every two years.

Deere would wait until both issues resolved themselves and when they did, they would not swing and miss a second time. Singh joined the company in 2007. 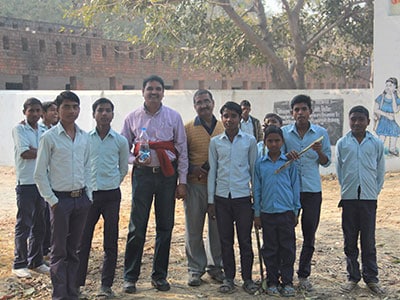 "I've always wanted to do good things, help people," he said. "As a professor it was about students. At John Deere there is a different calling. Feeding and providing for the world."

One of his strengths at Deere — something he learned when he was 9 years old — is securing outside funding to help expedite projects. Singh's relationship with the Department of Energy (DOE) has brought in millions of dollars to his work on electrification. That all came into focus with the 644K loader projects, using electronic circuits and inverter technology to create hybrid vehicles.

To date, the DOE has provided about $6 million toward the loader research, effectively, in Singh's view, "de-risking" the project.

"The risk of failure is the risk of losing time, not money," he explained. "When you lose time, you fall behind and allow competition to catch up and learn from your mistakes."

As Region 4's public funding manager Singh is a natural fit to follow his own advice.

"This new role requires me to interface with government agencies, universities, and do more. I can help quickly transfer knowledge from universities and develop emerging technologies relevant to John Deere applications, bring the government dollar, and go to selected groups within John Deere and work on those projects," he said.

Now, Singh thinks of the Fellow Award and how his journey has brought him to this point.

He quotes a saying in Sanskrit. Translated it means: "Do your work and never hope for any reward. Reward will come by itself."

Singh will be the first to admit that despite his humble upbringing he's lived a blessed life. "I tell my parents and my kids that God is watching me."

There is humility in Singh's answer. Of all the lessons he has learned over the years perhaps the most are those from his father.

In helping make the world a better place, Brij Singh is once again the topper.

I've always wanted to do good things, help people. As a professor it was about students. At John Deere there is a different calling. Feeding and providing for the world.