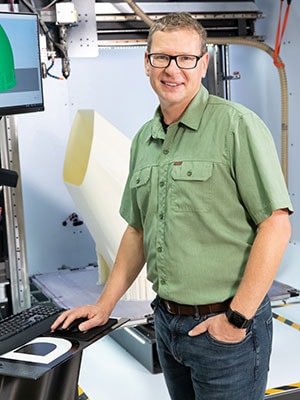 While Eric Johnson's work at the Moline Technology and Innovation Center focuses on materials engineering, he might be best known for his engaging communication style.

Eric Johnson has a lot going for him. He's smart in areas that if you're not you are quickly left behind. He's a good communicator, able to take complex concepts and peel them to their bare essence. He has the right mix of practicality and quirkiness, dividing what makes sense from what makes an impact.

And, when he speaks you find yourself leaning in.

His voice is full of inflection and intonation. In conversation he navigates you through sentences with tone and tempo. It's hard not to listen to him because sometimes — sometimes — it's not necessarily what he's saying, it's how he's saying it.

When more people enter his stories, he voices their roles, too. If the conversations are fictional to prove a point, he plays those characters that form the thoughts in his head. Talking with him is like listening to a 1950s radio show where one actor plays eight others.

It is highly engaging. And, yes, entertaining.

But John Deere doesn't hand out Fellow Awards to the star of the school play. Johnson, a senior staff engineer, has that rare ability to take dense information and explain it, expand it, and make it useful. He's a leader in the fields of additive manufacturing and materials engineering.

He'll tell you the credit for his engineering path goes to his father. Well, that and his complete lack of interest in taking foreign language courses in college. But that comes later.

As for his outgoing personality?

"That's 100 percent my mom," he says from the side of his mouth as if he's letting you in on a secret. 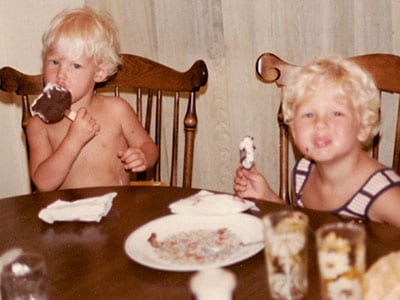 Johnson, right, grew up in Davenport, Iowa, with two other brothers. Life might have been simpler — and messier — then with his younger brother Ryan.

Colleagues say Johnson is known for being curious about people first. It feeds his empathetic gene and makes interactions more meaningful, believing there's more value in being interested than interesting.

"I guess if I have one gift it's the marrying of personal aspects with the technical," he said when asked how his parents may have formed his personality. "It's being able to talk to people, being able to relate to people, but still have some of the technical background to solve problems and to get to the understanding of the problem."

Johnson, the oldest of three boys, grew up in a working-class neighborhood in Davenport, Iowa. The family's 900-square-foot house often felt cramped, pushing the siblings outside to the open spaces surrounding a network of dead-end streets. There would be fort building in the nearby woods while a giant hill and open field allowed for physical play and the occasional "hunt" of rabbits and squirrels.

"I felt like I had a lot of freedom to be able to just really explore and go play," he said. "A lot of the time was spent by doing that and it was, you know, when the streetlights come on that was the time to come home."

He describes his father, Russ, as a "super smart guy, an exceptional engineer." A personable, but "not outgoing" figure, Johnson's dad is process and detail oriented. When engineering wasn't a great career option in the early 1970s, he earned a teaching certificate to add to his electrical engineering degree.

It would be his mom, Jeannine, that added the social dynamic to his upbringing, saying she rarely met someone she couldn't talk to. He provides two examples of how her influence factored into his development. One is relatable, the other is admirable.

"It's just that connection with people. Respecting where everybody comes from and that everybody did come from something" he said. "It's the approach of just trying to see people as humans."

It wasn't uncommon — almost normal really — for Johnson's mom to have her three boys with her as they took the family's silver Oldsmobile to the grocery store.

"She'd always say, 'I'm just going to run. Just run in. Get a couple of things.' We knew what that meant," he said with a smile and a shrug.

What was promised to take a few minutes would last a half hour or more. The three boys, as old as 10 and as young as 6, grew bored. There would be wrestling across the gray cloth seats. Windows would be rolled down, bodies hanging out for a better view.

Eventually, when the will to amuse each other faded, they would go inside and look for her. "She was always talking to someone. Always."

When Johnson was older and in high school, he and his parents went to an iconic and beloved hole-in-the-wall diner owned by an elderly woman. Service was slow and orders backed up.

"The owner apologized to us," he said. "Someone had called in sick and she was short-staffed. My mom volunteered us to wash dishes to help her out." And just like that, Johnson got his first job, being hired at the diner after the experience.

"That was my mom right there. That she volunteered us didn't come as a surprise," he said.

It's just that connection with people. Respecting where everybody comes from and that everybody did come from something. It's the approach of just trying to see people as humans. 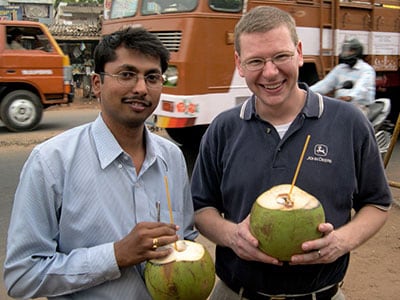 Johnson's first international trip for Deere took him to India, a place "where I knew no one but was treated so well," he said.

His mom was trained in childhood education but never taught in the classroom. While she wasn't a stickler on chores around the house — "she let us off pretty easy," Johnson admitted — there was an expectation when it came to schoolwork.

Responsibility began early in life — and in the day — as Johnson and his brothers sat in the home's wedge of a kitchen. Dark brown cabinets competed with the light from the sliding glass doors. "We just sat at the table and looked outside, wanting to be there instead," he said.

Both of his parents would check homework each morning over breakfast, offering critiques and insights, not afraid to tell their boys where they missed the mark.

"Oh, it was great," Johnson said with clear sarcasm. "It was a little bit like a home school with school kind of thing."

As his education progressed a moment of clarity arose. Strong in math and science — and not a fan of English, writing, and spelling — Johnson took a chemistry class. He was a sophomore at Davenport West High School. His teacher was Jack Hudson.

"Mr. Hudson was phenomenal," Johnson said at a level of enthusiasm even noticeable for him. "He did a fantastic job and made the subject matter really interesting."

A dream was formed. "I wanted to be a chemistry teacher. I knew that for certain," he said.

But as often is the case, certainty can be a map drawn with incomplete lines.

As a freshman at Iowa State University, Johnson soon learned there were required courses for his chemistry major and one proved too steep to climb.

"Seriously. I was not good at English so I did not think I would be good at another language.  Now I wish I would have not been so stubborn, but c'est la vie!" 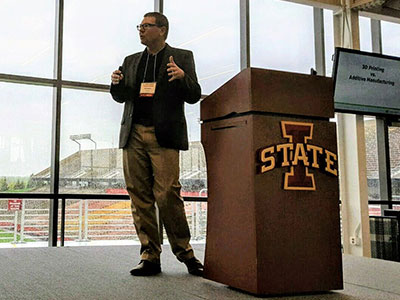 Johnson is known for his public speaking, here at his alma mater Iowa State University.

Johnson had a decision to make.

He started as an undeclared engineering student with the opportunity to visit "open houses" for majors within the program. Two stood out to him — chemical and metallurgical engineering.

"Chemical engineering seemed like the closest thing to chemistry," he added.

Inside a packed lecture hall — "I could not even get a seat, I had to sit on the ground" — there were PowerPoint presentations and more listening than doing. He was uninspired.

Then, the second open house.

"There were multiple professors doing demonstrations of materials. One had space shuttle tiles and they were melting a penny on it," he said, sounding like a kid who just saw his first snake.

"There was bending light going through different polymers. It was very hands-on." The professors, he said, "were really involved." And, the final selling point: "There were very few people in there."

"It provided both aspects. It was that engineering side, but also it used that chemistry base," Johnson said.

The choice was easy.

He would join John Deere in 2001, later adding a master's degree and Ph.D. in material science. For nearly 20 years Johnson has helped elevate Deere's technology profile with his expertise, often straddling two critical intersections for the business.

The first involves the crossing of materials and mechanics — the insight gained through using data and simulation to predict just how long John Deere products will perform in the field.

The second intersection is one that is getting a lot of attention of late and that is the world of smart industrial. Johnson's ability to develop and deploy new technologies and processes — like additive manufacturing — have allowed Deere business units throughout the enterprise to save more than $2.5 million a year in tooling expenses.

Both intertwined fields are critical to customer uptime and Deere's business health. They do come with their challenges, however.

"The speed of innovation can be a curse," he said, referencing the growing space of 3D printing. "A lot of it is viewed as pie in the sky. There are people who think 'Oh, it's going to change the world,' but we're not there just yet."

Johnson credits former colleague and Fellow Award winner Mohamed El-Zein as being a critical influence in his own development.

"He was about pushing and believing," Johnson said. "He was really demanding the best of you. He would probably push somewhat in the impossible. You wanted to do your best and figure out a way to do the impossible."

It has been said the first metric of innovation is failure. Johnson sees failure — a word often wrapped in negativity — differently.

"There is certainly a desire to get to solutions faster," he admitted. "I believe in the work we are doing and that the risk of failure is worth the shot of the breakthrough.

"But, I've never really thought of them as failures, even the projects that were not successful. They were usually just lessons learned."

Johnson's most recent lesson came in the form of a 2020 Fellow Award. The recognition has allowed him to pause for a moment and reflect, capturing glimpses of both people and process.

"We often get caught up in the day-to-day that you can forget your body of work. This has allowed me to look at that. But it's not something I've ever done alone. It's allowed me to remember the many people I've worked with and had a chance to be with on these projects," he said.

He also realizes there are new responsibilities now, and new pressures.

"It's a reminder that I not only represent our company, but myself as well," he said. "Working at John Deere provides opportunities around the world. Being a Fellow adds weight to being ready for those opportunities."

It sounds like heady stuff, the kind of awareness that can — and does — produce doubt, if you're not ready for it.

"You wonder, 'Do I have to go out and prove if I belong?' Then I realized, no, no you are still you."

And being "you" is all that Johnson needs to be ready.

It's why the honor fits.

There's no doubt about it.

I believe in the work we are doing and that the risk of failure is worth the shot of the breakthrough.