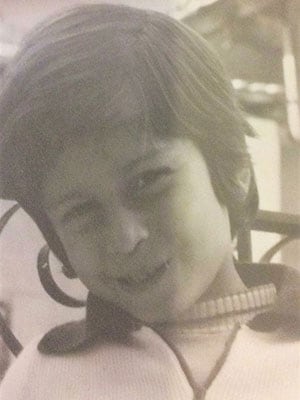 Wissam didn't start school in Lebanon until after his 9th birthday. This photo was taken by his sister, Osmet, when she took him to school to celebrate the country's Independence Day.

Wissam El-Ratal's childhood seems, from a somewhat informed distance, idyllic. Although his native Lebanon is going through a civil war, living in the northern city of Tripoli has shielded him from the scars that can alter both memories and landscapes. The youngest of 10 children, he's spoiled and protected.

At age 9 he is still at home while most of his friends are in third grade, his mom not wanting him to leave the nest just yet.

Ironically, his sister, Osmet, is a young schoolteacher. With quizzes to be graded and papers scattered on her parents' dining room table, there is one child's work demanding all her attention. While it's not unique to have her thoughts divided, the actions of this student are concerning.

What makes this disruption odd is this boy is not in her class. Actually, he's not in any class.

The student is Wissam, and he's sitting right across from her.

He's curious and smart and while both traits are often on display they are rarely measured. That all is about to change as he begins to draw on the schoolteacher's paperwork with a blue pen. Osmet, stunned, asks her brother what he is doing. He admits he has no idea.

The daughter turns to her overprotective mother and declares, "My little brother is going to be an ignorant guy."

It's time for his formal education to begin.

The smell of orange blossoms and salt air from the Mediterranean Sea are a reminder of a simpler time, when days involved driving with his parents to Beirut as his father worked getting car part shipments to his stores.

El-Ratal would study his father, Hussein, a detailed man who stressed only doing your best when doing anything at all. His mother, Naima, was loving and nurturing and often held the opposite belief. If it doesn't work out, she'd tell her children, there's always tomorrow and more opportunity.

El-Ratal will tell you he's most like his father and will have plenty of proof to back it up. He will list all the ways — from being a serious planner and decision-maker to a guy who follows through. But while he's telling you how he's like his father he will do it with all the joy and charm and openness that only a mother of 10 could possibly possess.

"They were the perfect balance," he said. "My father indulged my questions and helped me learn and my mother gave me comfort. I took a little from both. They complemented each other."

El-Ratal, global engineering manager of the Tractor Platform for Virtual Design & Verification, shares memories as if he's amazed at how it all turned out, his mother's positive personality shining through. He also talks about being driven by perfection and haunted by events he'll call "failures" even when evidence shows that's too harsh a term. That's his father's influence forging the drive needed for success.

And, success would come. But, first, there's this little detail of getting his education on track and caught up with his classmates.

The frequent road trips allowed El-Ratal exposure to vehicles and parts — engines, fenders, transmissions — and the "magic" of what made them move.

"I was extremely curious, and I always wanted to know how things worked," he said. "I would take my toys apart, look at all the parts and then imagine them put back together, making something better than what was there before. I wanted to know why these things, the parts, were separate from the car."

His appetite to learn was fed by his father who often allowed him to observe most anything El-Ratal asked questions about. This would include customer cars, airplanes (despite his dad's fear of flying) and tanks.

"I was getting a different kind of education," he said. "I always had a pencil with me, and I would draw. Just draw, draw, draw — on papers, walls, and even furniture."

That drawing led to creating his own book of sketches (of military planes) when he was 11.

El-Ratal said he was driven by "always wanting more information." As the youngest he would ask his siblings for answers. Over and over. "Why is that?" "What is this?"

What typically followed would be a toy to match his curiosity. At age 6, when he asked about cars, he was given a yellow Volkswagen Beetle scale model toy car.

"OK, now this is the toy. You know how it works or how it functions," he said in simulating the conversation.

"I would take a screwdriver and take the car apart," he added. 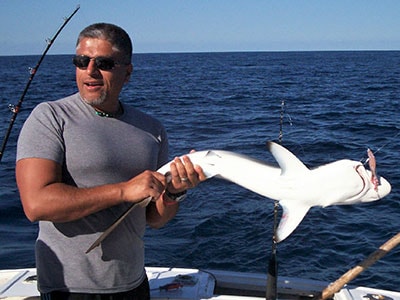 Wissam El-Ratal is not one to back away from adventure, even if it involves catching a shark on a fishing trip.

Naima heeded Osmet's advice and enrolled El-Ratal in school, starting him in classes with younger children. It didn't take him long to catch up.

He credits two things for helping him stay on track — his sister and bribery.

"The foundation I got for school came from Osmet. She's the one who got me started," he said. "She would teach me after school, throughout the summer, on weekends. I made up three years in one."

And when he made progress, she was right there to reward her youngest brother with candy and toys.

"I remember when I was doing something right, she was getting me a Matchbox car. It's so awesome. I wired myself to say, 'If I do something good, I'm going to get that Matchbox," he said with a smile.

Math came easy. "I looked at math as almost solving a puzzle. And, you know, when I solve it, I say, "Ah-ha. This is the answer, and this is where I'm happy."

The value of learning not only built confidence, it built appreciation.

"I have a special relationship with my sister, different from the rest of my other siblings," he said. "Maybe because she gave me more attention when I needed it the most. I always remember it and I'm grateful to her."

El-Ratal was a straight A student throughout his primary education and would get his undergraduate degree in Mechanical Engineering from the American University in Beirut, finishing at the top of his class.

After graduation his love of airplanes landed him a job at Middle East Airlines getting to work on jumbo jets. The boy who drew a book's worth of planes was now seeing them up close. It seemed perfect.

"It was really boring," he said with a wide smile. "I was just sitting and putting information into computers. I realized all I was doing was operating the machine and all I thought about was designing the machine."

The airline was impressed with their new hire and had plans to send him to Scotland for training. El-Ratal had plans, too, and they were not popular with his employer or his family.

He chose the University of Michigan for his master's degree, but the decision came with one condition: He promised his father he would return home.

While at Michigan he had an "inspiring" professor who also worked at Ford Motor Company.

"He was really an influencer because I never thought about stress and strain in applied mechanics," El-Ratal said. "But he taught it in such an intriguing way to me I was like, 'Hmm.' This is where my curiosity kicked back in."

Fully engaged, El-Ratal flourished. So much so, in fact, that his peers preferred to avoid classes he took, if possible.

He would spend his days working at Ford and at nights tending to his studies. One day, while in a lab he was pleased that so many of his classmates were asking which classes he would be taking the following semester. They wanted his opinion and that made El-Ratal feel valued.

"And then I would not see them in the class. I thought they didn't like me and they were trying to avoid me."

Well, no and yes.

"Then a professor told me, 'Wissam, they cannot keep up with you because you take things way above and beyond what people like to take it.' Honestly, I felt bad," he said. 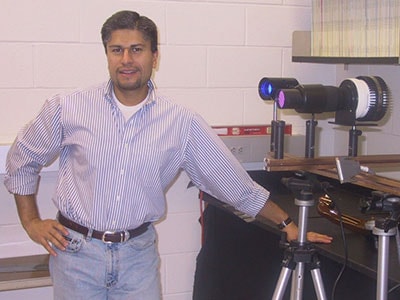 El-Ratal helped develop S3 coating technology that required an optical measuring system like this one at the University of Florida.

El-Ratal would graduate at the top of his class and go to work at Ford.

He would not go back to Tripoli.

This, of course, was not an easy decision. When El-Ratal first moved to Michigan his mother called him every day for the first few months. They both missed the other. One day, when El-Ratal wanted to make himself a fried egg (just like his mom would) and when the yolk plopped out of the cracked shell and fell to the floor. He realized he didn't know how.

"I wasn't expecting that," he said. "I realized I didn't know what I was doing. I called my mom and we both cried. I was missing my family."

At Ford, El-Ratal would be given projects and opportunities that would intrigue him, with advanced technology providing the push.

His motivation to succeed and his insatiable desire for knowledge was a symbiotic relationship. The intensity often left little time for shutting off his brain.

"If I like what I do then it becomes a hobby for me," he said. "But then I can't stop because I don't know where to stop."

In 2008, El-Ratal would come to Waterloo and John Deere, the company's mission — and tractors — enticing him. And although another vehicle with another engine would be motivation enough, he said Deere's culture of teamwork and meaningful friendships sold him the most.

"When I click with a great team, we are an unstoppable machine," he said.

It's now that he talks about artificial intelligence (AI), machine learning, the new 8RX tractor, and Virtual Design Verification — areas where he has been an enterprise leader.

"We not only changed a product with the 8RX but we also changed a process with VDV," he said. "This was a culture change on how we looked at bringing new tools and methods to deliver simulation-based designs."

El-Ratal grew up on cherishing credibility and accountability and in earning the 2020 Fellow Award he received both.

He's at a stage in his career where he admits leaving a legacy is most important. He likes being mentioned as a point of reference when decisions are made and earning the Fellow is one large stride in that direction.

"The award means someone really appreciated my work within John Deere and they found it is worthy to be recognized," El-Ratal said. "They are saying, 'This person deserves something.'"

For El-Ratal this is perhaps the biggest Matchbox car of them all.