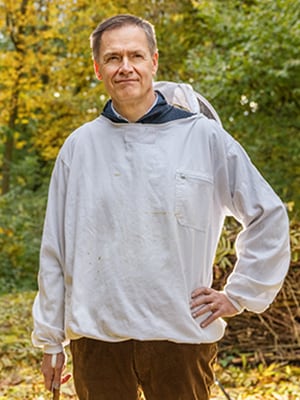 Gilles Dryancour's willingness to understand all sides of an issue included him becoming a hobby beekeeper.

The hands of a 2-year-old are considered educational tools and on this hot summer day in Mouscron, Belgium, Gilles Dryancour is about to learn a lesson on how fragile they can be.

"It's a memory I haven't forgotten. I can still see the colors. And the bee."

A string of red brick row houses outline his neighborhood. Back yards are long and narrow, separated by wood fencing. All of this is familiar to the boy. What isn't is the bee on the terrace just outside his back door. It has caught the toddler's attention. His mother, Isabelle, is a few steps inside doing her best to keep an eye on the young explorer.

Dryancour has a plan. He wants to grab the bee and put it in his yellow bucket. What he doesn't know is he's about to have his first memorable connection with nature.

This memory is significant because Dryancour's life has been formed through connections. For nearly 20 years he has been John Deere's director of government affairs in Region 2 and making connections is critical to his and the company's success in Europe.

With one firm grasp — and one quick release — the bee and the boy are done interacting. It would make sense, then, moving forward that Dryancour would avoid the stinging insects whenever possible. Yet, that doesn't happen. Not at all.

Years later, now living in the French countryside, Dryancour and a friend are walking on the roadside. A car passes them, and runs over a beehive. Angry, swarming bees sting Dryancour several times — the harsh memory from Belgium now multiplied. His friend is less fortunate, ending up in the hospital with dozens more stings. 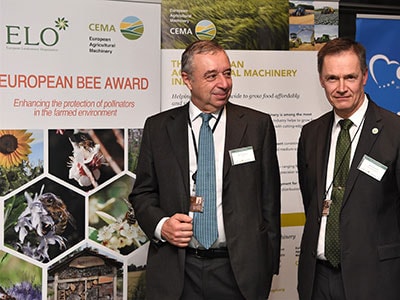 Dryancour helped establish the European Bee Award, an honor that recognizes manufacturers who design products with bee health in mind.

Dryancour is known as a tireless advocate on behalf of Deere's interests — both legislative and regulatory. What makes him stand out is he has not done so with blinders on. His guidance for Deere with European Union (EU) institutions involves in-depth policy assessments and legislative proposals.

In an environment built on positions, arguing the contrary is part of the job.

When a working group on sprayers raised concerns regarding the balance between modern agricultural equipment and the ecosystem of pollinating insects — yes, bees — the default solution would most likely have been to defend and deflect. But that's not how Dryancour thinks.

"You know, I've always liked to analyze things," he said. "We have a basket of skills that we add to and pull from. We do that by ourselves because we have preferences."

Dryancour's preference was to learn and understand the issue, admitting that his knowledge of bees had been limited and painful.

Expanding that knowledge meant, to Dryancour, taking a beekeeping course, becoming a hobby beekeeper, and now tending to multiple hives and tens of thousands of bees. It doesn't end there. He then helped create the European Bee Award, an annual event recognizing the efforts of manufacturing companies that design their products to be more bee friendly.

His unique approach and dedication to connect and solve issues paid dividends a year later. An Austrian politician with a green party background and a desire to slow the advancement of farming technology was making assumptions about John Deere and Dryancour. The goal of the stranger: to protect nature's pollinators.

"I was able to show him common ground and tell him I was an organic beekeeper," Dryancour said. "It shocked him and allowed us to create a bond."

The politician then would vouch for Dryancour during an EU Parliament's stakeholders meeting on precision agriculture.

"He stood up and said, 'I know this man and if this man says it's true then I believe him.' We now understood each other," Dryancour said. 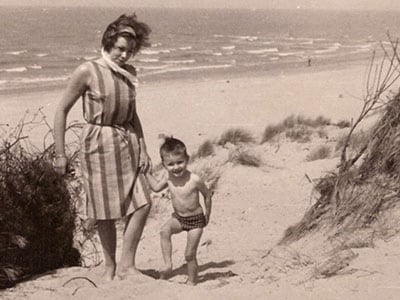 Dryancour and his mother, Isabelle, often spent time together outdoors. Here, they are at the De Panne Beach in Belgium at the North Sea when he was 4 years old.

The importance for connections was something Dryancour witnessed in his mother's approach to life and people. When asked if it was a skill she taught him, he repeats the question in his typical thoughtful, measured way and then realizes there's a better answer.

"It's what she showed me," he said. "I never had to question myself about the goodness of my mother. She had a lot of friends and I saw it every day."

Dryancour talks about his mother's kindness and her artistic background and his father's business successes as a young man and as an Air Force mechanic in the 1950s in Morocco. The family would move from Belgium in the early 1960s to his father's native France.

As a child he spent as much time as he could outdoors with friends.

"Walking in nature has always been a great pleasure for me," he added. "To be outside and be with friends and nature, that's what I like. We explored caves, went fishing, tried to find fossils, played hide-and-seek. But it's always outside with a relationship with Mother Nature."

Mother Nature is a reference he'll make numerous times, treating her like a member of the family. He later mentions John Deere's focus on the environment. "One of the reasons I like the company so much is because it is linked to the cycles of Mother Nature," he said.

In the early 1970s nature introduced him to the wonders of farm work. He would ride his bike across the train tracks, down the road, and under a giant aqueduct to his friend, Paul's, farm. Though the chores were difficult and plentiful, Dryancour embraced the work.

"We were really working and quite hard, and we had long days, but we were like playing. That is quite amazing," he said. "He would drive the tractor and I'm going to the field taking care of the cows. I'm milking or harvesting the tomatoes and melons. I mean surprisingly those were very long days. I was away like 10 hours from home. But it was not like working. It was just fun."

One of the reasons I like the company so much is because it is linked to the cycles of Mother Nature.

While discussing the farm he would make a quick aside, "I got stung there a lot, too." More bees.

You had to be terrified, he's asked. Then he admits he's not really scared of animals. In a bit of comedic relief, he unravels his own claim by listing all the things he is scared of.

"I'm trying to think if I am afraid by anything like an animal," Dryancour offered. "I would say snakes. They don't inspire me too much. Well, poisonous ones, dangerous ones. But no, I'm not so afraid of animals, perhaps wrongly so. Perhaps a little bit by wild dogs because I was once attacked by dogs. And geese. I was attacked by geese."

His eyes shift, working to recall the memories and maintain accuracy about the geese. "That is painful I can tell you."

The recollection produces a smile and an acknowledgement: "I wanted my friend's life." 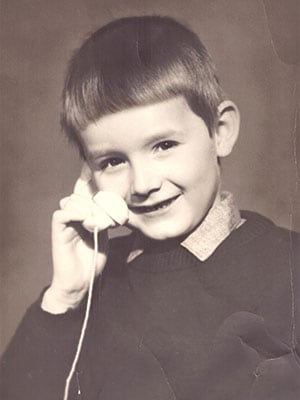 Making connections, even in play, have been important to Gilles Dryancour his entire life. At age 5 his favorite toy was this phone.

That is Dryancour's education through nature and people. In the formal sense, through school, he fondly recalls physics, literature, and history. He would pair physics and history, saying both "unveil the world."

"I was very fond of history. History makes your life — you live longer," he said. "We have a rather short lifespan. History gives us a lot of lessons of humankind. If you really go deep in history, you can have a feeling that you live these periods of time. It's like you would have lived hundreds of years."

Dryancour credits literature with providing depth to his insights and rounding out his combination of a formal, natural, and social education. He often recommends books as a way to show kinship. But he doesn't spend much time talking about school although his accomplishments there would warrant it.

He said he knew he stood out academically when he was 18 and a freshman in college. "But I didn't believe it," he said quickly.

Exam scores were posted outside a professor's class. Another student wrote next to Dryancour's name and score, "Too bright guy." It was not meant as a compliment.

"I found it strange that somebody was posting something because I didn't feel so different," he said. "The day I believe I'm different or special will be a bad day for me. I wouldn't want to go too far in that direction because it's not inclusive."

That example from college transfers nicely to Dryancour being named a Fellow Award winner. While, by definition, the award acknowledges those individuals who stand apart and excel it is an uncomfortable pairing for Dryancour.

"We have to be careful not to take ourselves too seriously," he said. "We are normal beings. Yes, I am pleased and honored by the Fellows, but it could have been anybody else. And, I also believe in good fate, providence, and lucky stars."

When asked what has kept him at Deere for the past two decades Dryancour changes his tone and his face stiffens. For a man who presents viewpoints and forms arguments for a living he's wanting to make sure what he's about to say is not missed.

"I cannot imagine myself working for any other competitors. None of them."

It seems the feeling is mutual. Dryancour said the Fellows is "a very strong signal of belonging to the organization."

For a person maneuvering in a political environment, the Fellow Award provides credibility and reinforces his standing.

And it should most certainly help him make connections, which if we've learned anything by now, is exactly what Dryancour values most of all.