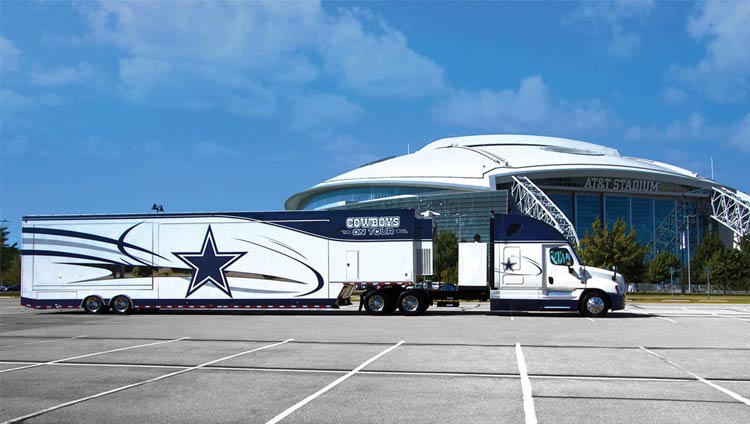 Nothing beats the sound of diehard fans in a packed football stadium, and that's certainly the case with football in Texas. From season passes to signed jerseys, Cowboys car wraps, and even the occasional naming of first-born children after one of the legendary players, Dallas Cowboy fans show that Texas football is no exception to the saying "everything is bigger in Texas"— especially when it comes to team spirit.

To show their appreciation, in 2009 the Cowboys started the "Cowboys on Tour" mobile program that travels state to state, giving back to their loyal fans and sponsors. The caravan includes two luxury buses and the legendary Dallas Cowboys Hall of Fame trailer, measuring in at 16 meters (53 feet) long, 4 meters (13'6 inches) tall, and 2.4 meters (8 feet) wide.

The first thing to catch fans' eyes when they step inside the trailer is the collection of trophies and rings on display. The trailer is split into four sections: one dedicated to the current team, with items such as Dak Prescott's quarterback towel, Jason Witten's gloves, and the team picture. The next section is all about the Jones family foundation and their charitable work. You can stroll down memory lane with the original 1960s Cowboys. There you’ll find a Tom Landry statue — a favorite piece of memorabilia of the trailer's driver, Charles Boltas. All eyes also behold America’s sweethearts — the Dallas Cowboys Cheerleaders — in the final section of the trailer. Boltas claimed this "mobile museum's" main purpose is to educate people about the team and its history. It also brings the fan experience to those who haven’t seen the Dallas Cowboys memorabilia in person.

When it came to repowering their trailer, Boltas says he wanted a generator driven by an engine "capable of matching the caliber of the Dallas Cowboys."

Searching for the right engine, Boltas first contacted Gen-Tech, the Georgia company that supplied the original generator set for the Hall of Fame trailer in 2009. The Dallas Cowboys wanted their Hall of Fame trailer back on the road as quickly as possible. To accomplish this required a team effort. Gen-Tech worked with Cal-Coast Machinery (a John Deere dealer that supplies the Cowboys training camp with Gator utility vehicles) and John Deere engine distributor, Flint Equipment Company, to expedite the order and assembly of the engine at Motores John Deere, the John Deere engine factory in Torreon, Mexico.

"With the clock ticking down, we didn’t have a lot of time to pull this together, but we did and did it successfully," says Eric Sosa, sales manager for Gen-Tech. "With the time crunch, John Deere Power Systems didn’t blow us off because Gen-Tech is a nine-person company. John Deere met the challenge."

It was a win-win for everyone involved, says Boltas. "The great thing about it was everyone worked together to make this happen, just like a team. Everyone that helped was a part of this victory."

We needed an engine capable of matching the caliber of the Dallas Cowboys.